The name Amicus Therapeutics Inc. (FOLD) came up Wednesday night in the "Lightning Round" of Jim Cramer's entertaining and informative Mad Money program. Cramer said, "I think this one is really good. I like it." I decided to check out the charts and indicators today and I liked what I saw. Let's look together.

In the daily bar chart of FOLD, below, we can see that prices corrected to the downside from a June peak to a December low. Prices quickly rebounded in January and they have since gone on to make a higher high giving us an uptrend. FOLD is trading above the declining 200-day moving average line and above the rising 50-day line. Trading volume has been heavy since late September and the

In the weekly bar chart of FOLD, below, we looked back 12 years instead of just three years. I wanted to point out the number of rally failures around 418 - in 2008, 2009, 2015 and last year. A weekly breakout over $18 will be significant. FOLD is above the declining 40-week moving average line.

The weekly OBV line has been rising the past five years and the MACD oscillator is about to go positive again.

In this Point and Figure chart of FOLD, below, we can see that all the X's and O's have generated a possible or tentative price target of $20.50 which means that FOLD could break out over the $18 resistance area. 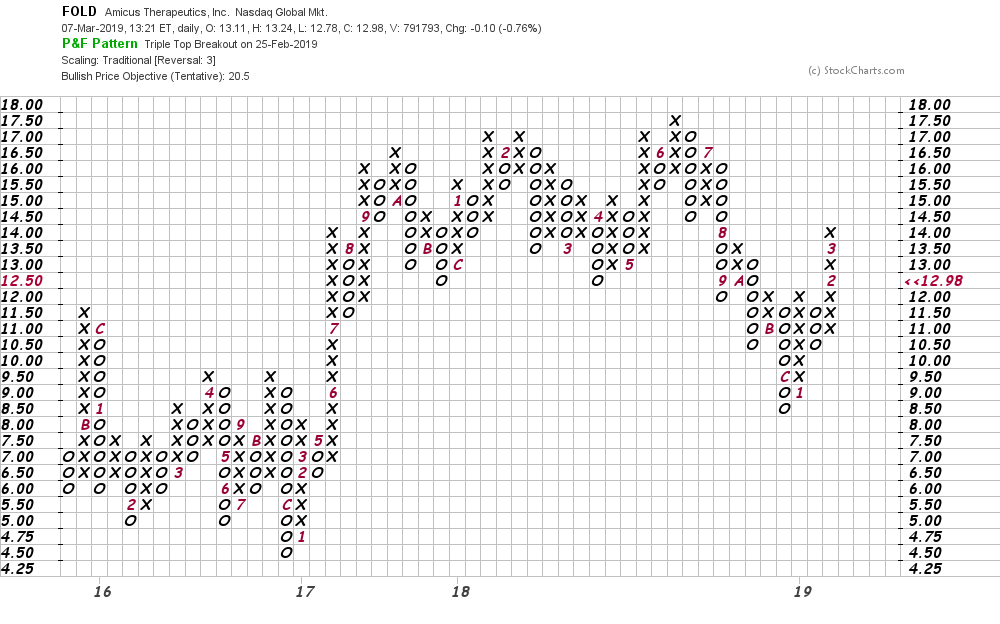 Bottom-line strategy: The combination of these three charts (above) gives me a bullish view on FOLD. The Point and Figure charts suggests we could break out over $18 which, if it happens, could start a major move to the upside. Risk a close below $10.50.

Get an email alert each time I write an article for Real Money. Click the "+Follow" next to my byline to this article.
TAGS: Investing | Stocks | Technical Analysis | Healthcare | Pharmaceuticals