In his second "Executive Decision" segment on Monday night's Mad Money from the West Coast, Jim Cramer sat down with Bob Bradway, chairman and CEO of Amgen Inc. (AMGN) . Bradway talked about Aimovig, Amgen's treatment for migraines. He said the drug was the first of its kind to specifically target chronic migraine sufferers. The drug already has over 150,000 patients and is seeing incredible results.

Amgen also announced Monday that it is lowering the price of Repatha, its new cholesterol-lowering treatment, by 60%. Bradway said the drug is a game-changer, but they realized that some patients were struggling to pay for it. Bradway said they continue to forecast both revenue and earnings per share growth and remain committed to returning capital to shareholders via their dividend and share repurchase programs.

Let's round out the discussion with a check of the charts and indicators.

In the daily bar chart of Action Alerts PLUS holding AMGN, below, we can see some very positive technical signals. From a small double bottom in April/May, AMGN rallied to a last September zenith. Over the past three months AMGN has corrected sideways while the broad market averages declined sharply.

Now shift your eyes down to the On-Balance-Volume (OBV) line in the middle panel below the price chart. The OBV line shows a rise for the past 12 months and amazingly does not decline over the past three months telling me that buyers of AMGN have been more aggressive the past year. Buyers of AMGN have accumulated more shares during the rallies and during the corrections -- impressive.

In the lower panel is the Moving Average Convergence Divergence (MACD) oscillator. This trend-following, math-driven indicator crossed to the upside at the end of December for a cover shorts buy signal and is very close to crossing above the zero line now for an outright go long signal.

In the weekly bar chart of AMGN, below, we can see that prices have been in an uptrend the past two years. Corrections have occurred along the way and the price action the past three months looks like just another correction along the same way higher. Prices are above the rising 40-week moving average line telling us that math tells us that we are in an uptrend.

The weekly OBV line shows a strong rise from April and tells me that buyers of AMGN have been more aggressive for months. The weekly MACD oscillator is above the zero line and is narrowing toward a potential bullish crossover and buy signal. 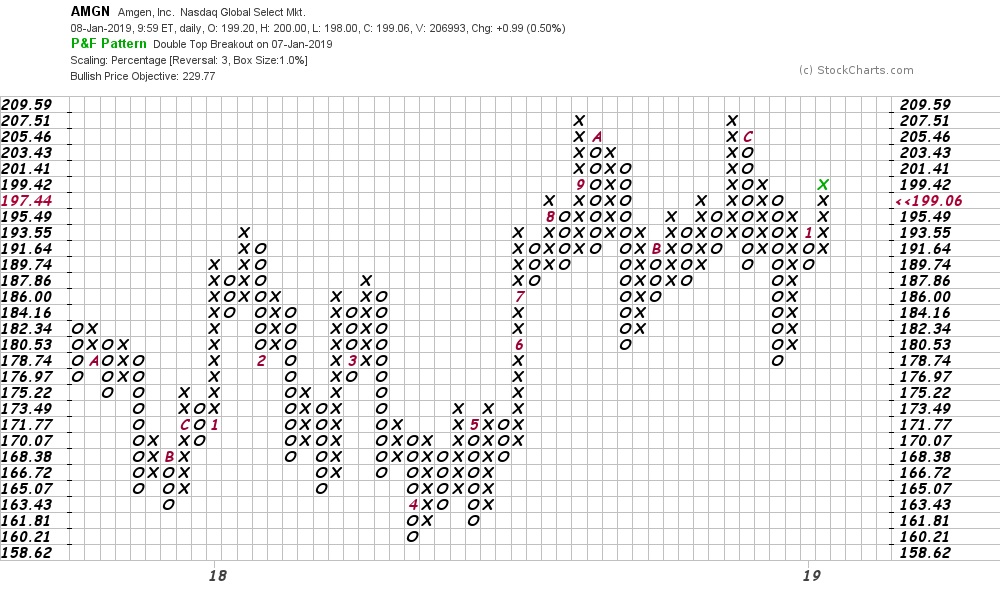 Bottom-line strategy: After the very negative market environment the past few months it is refreshing and exciting to find a stock with some upside potential. Traders and investors could go long AMGN or add to longs in the $200-$195 area risking a close below $187. $210 and then $230 are my upside price targets.

Get an email alert each time I write an article for Real Money. Click the "+Follow" next to my byline to this article.
TAGS: Investing | Stocks | Technical Analysis | Pharmaceuticals | Mad Money | Executive Interview