AmerisourceBergen Corp. (ABC) peaked back in October and sold off with the broad market into late December. A January/February rebound failed at the underside of a resistance zone beginning around $86 and prices remain below the declining 200-day moving average line.

In the daily bar chart of ABC, below, we can see that prices are testing a declining or bearish 50-day moving average line and are clearly below the bearish 200-day moving average line. The daily On-Balance-Volume (OBV) line has been rising from late December and suggests that buyers of ABC have been more aggressive -- unfortunately prices have been mostly weak since February.

The trend-following Moving Average Convergence Divergence (MACD) oscillator turned bearish in February and is just now poised to cross the zero line to the upside for a bullish signal.

In this weekly bar chart of ABC, below, we can see an earlier price peak for ABC in the beginning of 2018. Over the past three years the $70 area has held a number of times including twice so far this year.

ABC is trading below the declining 40-week moving average line and the weekly OBV line is neutral. The MACD oscillator has been in bearish territory below the zero line since November.

In this Point and Figure chart of ABC, below, we have a few clues that stand out. The software is projecting a bullish price target of $95 but a rally to $79.84 is needed for a short-term upside breakout. A decline to $75.21 would be a new low for the recent move down and would be bearish.

On the left side of the chart is the volume at price information which shows more volume above the current price level and less volume below. This suggests that prices could decline easier than travel to the upside. 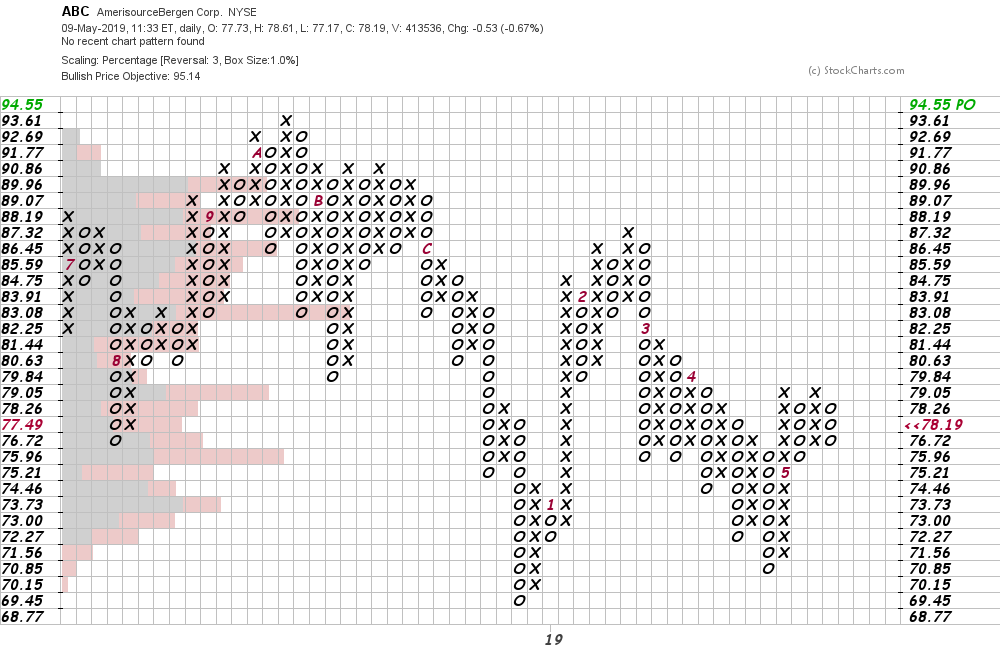 Bottom-line strategy:  Shares of ABC found buying interest in the $72-$70 area in late December and again in April. A third test of the area may not be successful as the rally in the broad market from the December nadir is rapidly reversing. Avoid the long side of ABC.

Get an email alert each time I write an article for Real Money. Click the "+Follow" next to my byline to this article.
TAGS: Investing | Stocks | Technical Analysis | United States