Taiclet said despite its name, American Tower is a global business, and one thing that is constant around the world is the need for wireless communication, data and entertainment. He said for many countries, their entire infrastructure is wireless, as they skipped wired communications altogether.

When asked about the U.S. telecom landscape in light of the expected Sprint (S) and T-Mobile (TMUS) merger, Taiclet said he thinks the market will benefit from having four strong players, which is what there will be once Sprint and T-Mobile divest some assets to Dish Network (DISH) , which has its own plans for a 5G roll-out.

Finally, Taiclet said 5G will be a game changer for our society, as it will make all sorts of new technologies possible and deliver speed and performance unlike anything we've seen so far. Let's see if the charts and indicators are up to the task.

In this daily bar chart of AMT, below, we can see a strong uptrend from the October nadir. Unlike the weak broad market at the time, AMT makes a higher low in late December. The slope of the 50-day moving average line turns positive in late October and AMT survived a number of tests of the indicator, including on last month. The 200-day moving average line is also bullish and the December pullback is the closest to a test we have seen since the rally started.

The On-Balance-Volume (OBV) line shows a rise to June and then a shallow decline. The Moving Average Convergence Divergence (MACD) oscillator fell below the zero line in late July, so it needs to be watched closer for clues on the strength of the rally.

In this weekly bar chart of AMT, below, we can see prices trading comfortably above the rising 40-week moving average line. Trading volume looks like it has slowed a little this year but the weekly OBV line shows a long move up, signaling three years of accumulation (buying). The MACD oscillator crossed to the downside in June, signaling a take profits sell signal.

In this Point and Figure chart of AMT, below, we can see a potential price target of $279 projected. A decline to $199.42 will likely weaken this chart. 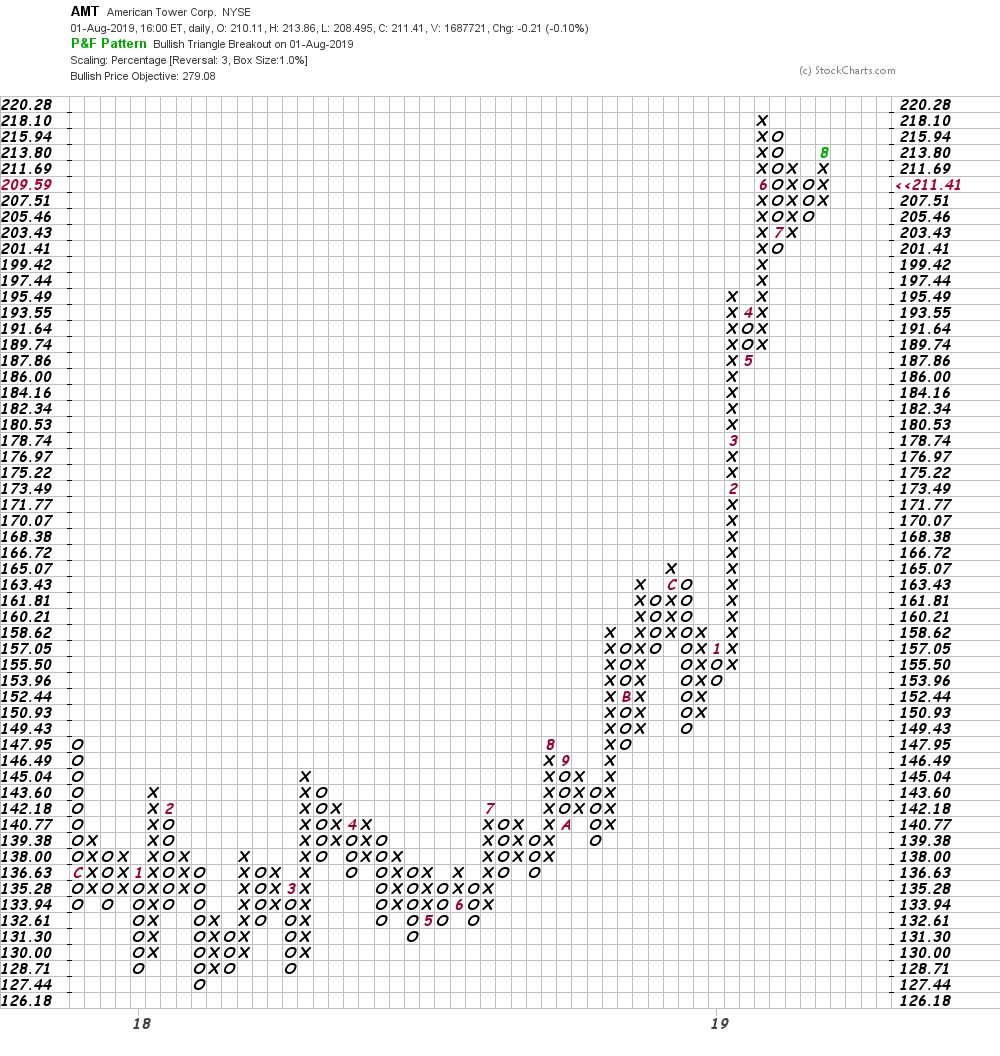 Bottom line strategy: AMT could trade sideways for several weeks as the gains of 2019 are digested and perhaps retarded a bit by a weak broad market. Longs should risk a close below $199 as that could signal a deeper correction.

Get an email alert each time I write an article for Real Money. Click the "+Follow" next to my byline to this article.
TAGS: Investing | Stocks | Technical Analysis | Construction & Engineering | Telecommunications | Mad Money | Executive Interview | Real Money | Telecom Services