By BRUCE KAMICH Sep 27, 2019 | 03:23 PM EDT
Stocks quotes in this article: AXP
American Express Co. ( AXP) turned lower in the middle of July to correct part of its run-up from late December. The longer-term picture of AXP looks strong so we want to see where we might become a buyer again.
In the daily bar chart of AXP, below, we can see a quick V-bottom for AXP at the end of December but the top in July was more of a rounding over affair. Prices stayed above the rising 50-day moving average line until August and by the end of the month the slope of the line had turned negative. The 200-day moving average line is still rising but only about $6 below the market.
The daily On-Balance-Volume (OBV) line moved sideways from April to July, largely diverging bearishly from the price action. Since the middle of July the OBV line has declined telling us that sellers of AXP have been more aggressive. The Moving Average Convergence Divergence (MACD) oscillator is below the zero line.

In the weekly bar chart of AXP, below, we can see a strong uptrend the past three years. Prices are above the rising 40-week moving average line but a test of that line looks possible in the weeks ahead.

The weekly OBV line has turned lower the past two months or so and the MACD oscillator crossed to the downside in late July for a take profits sell signal.

In this Point and Figure chart of AXP, below, we can see a downside price target of $113 but we could see further weakness as good support might not be seen until the $107-$105 area. Also a decline to $113 would break the rising 200-day line. 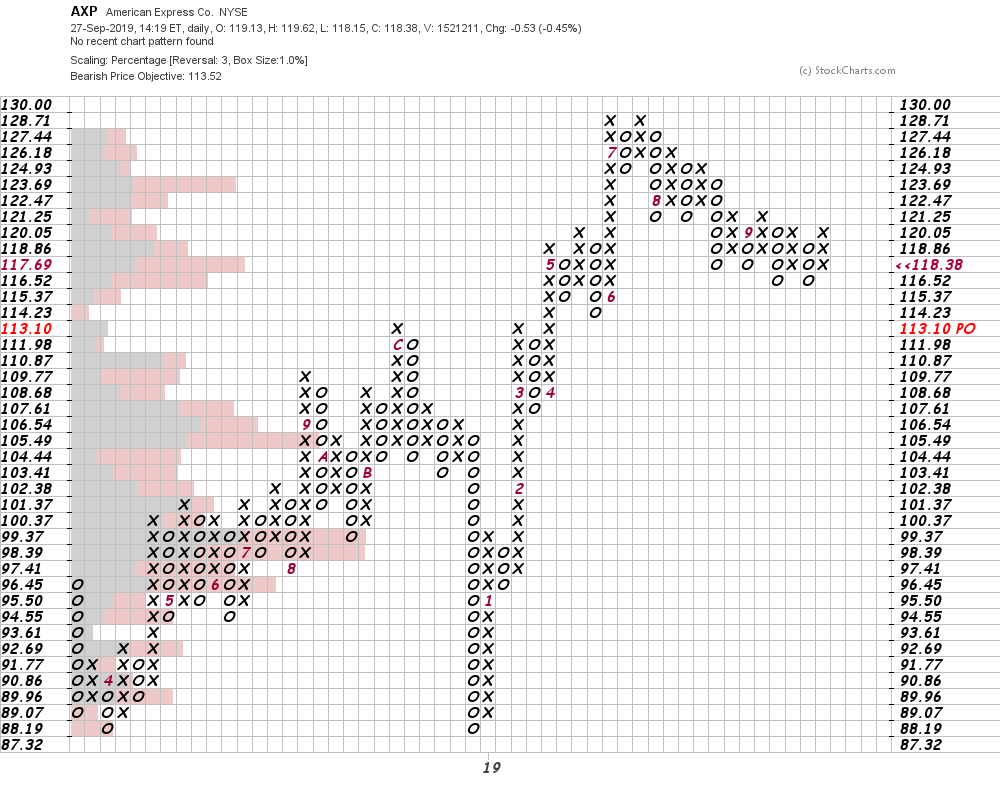 Bottom-line strategy: AXP looks like it could slowly grind lower. Keep your powder dry for now and let's see where buyers come back in so we can follow their lead.
(For more on American Express see Jim Cramer's column here.)
Get an email alert each time I write an article for Real Money. Click the "+Follow" next to my byline to this article.
TAGS: Investing | Stocks | Technical Analysis | Financial Services | Fintech