Akins said there's a lot going on at American Electric Power, including their recent announcement that they will grow their renewable energy generation to over 50% of total capacity.

Akins added that since he's been CEO, AEP has shuttered more than 18,000 megawatts of coal generation capacity, and they'll be adding even more solar, wind and renewables, along with some natural gas facilities as backups.

Let's check and see if the stock charts have any momentum.

When we last reviewed the charts of AEP back on March 4 we wrote that, "The charts and indicators of AEP point to lower prices ahead. Avoid the long side for now despite the attractive yield." Prices quickly bottomed and have rallied back strongly.

In the updated daily bar chart of AEP, below, we can see that the shares quickly turned to the upside in early March and rallied back above the 50-day and 200-day moving average lines. The slopes of both of these averages are now positive telling us that the trend is now up. (I hate getting whipsawed.)

The On-Balance-Volume (OBV) line was pointed down in February but made a higher low in early March and has since gone on to break above its October/November peaks. The OBV line is foreshadowing higher prices. The Moving Average Convergence Divergence (MACD) oscillator is above the zero line but has narrowed recently and could cross to the downside for a take profit sell signal.

In the weekly Japanese candlestick chart of AEP, below, we can see that prices are back above the rising 40-week moving average line. The latest weekly candle shows an upper shadow telling us that traders rejected the highs last week.

The weekly OBV has been positive since last April but shows a very slight dip now. The MACD oscillator has turned up from below the zero line and is very close to a crossover and buy signal.

In this daily Point and Figure chart of AEP, below, a potential upside price objective of $119 is being projected. 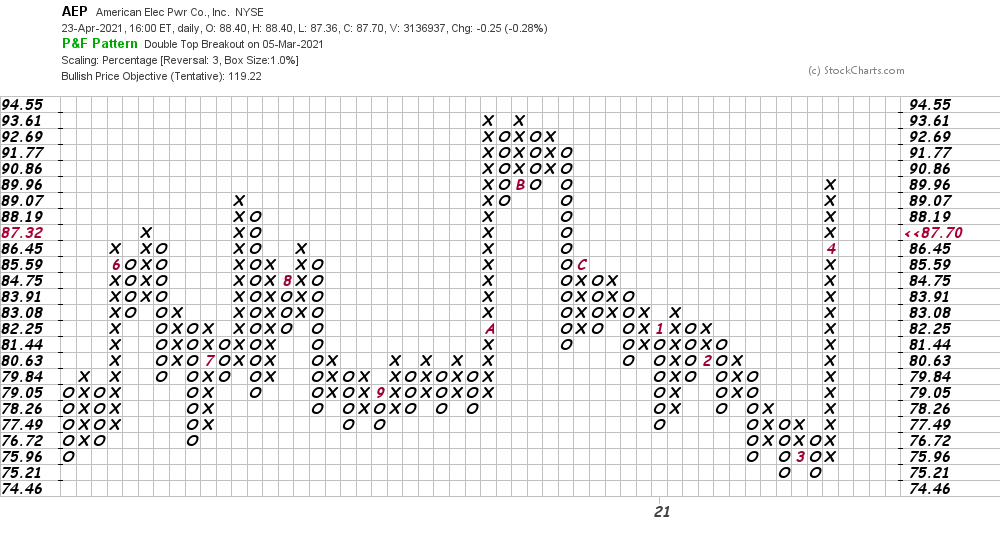 Bottom-line strategy: The charts of AEP are now bullish. Traders could go long AEP on a dip to $86 risking to $81. The $119 area is our price objective.

Get an email alert each time I write an article for Real Money. Click the "+Follow" next to my byline to this article.
TAGS: Investing | Stocks | Technical Analysis | Utilities | Mad Money | Executive Interview

High on Amazon or Not, Here's What to Expect

After selling off a month ago, the stocks has hung in there. Then again, it's easier to hang in there when the rest of the market catches a bid.