Jim Cramer on Tuesday's "Mad Money" program said the child tax credit stimulus is just about to hit the checkbooks of millions of families, most of which have paid down debt and are ready to spend for the coming back-to-school season. Cramer identified four stocks he said are perfect for this event. The first was Levi Strauss (LEVI) and the second was AEO Inc. (AEO) , formerly American Eagle Outfitters. Cramer said this Action Alerts PLUS holding has more room to run thanks to exposure to denim and its strong Aerie women's apparel brand.

Let's check out the charts of AEO.

In this daily bar chart of AEO, below, we can see that prices have been stalled in the $38 area (resistance) the past three months. Prices have been trading around the cresting 50-day moving average line. The slower-to-react 200-day moving average line is rising and intersects around $26. The On-Balance-Volume (OBV) line shows a peak in late April and a subsequent decline, telling us that traders have been more aggressive sellers in recent weeks; no wonder prices have been stalled around $38. The Moving Average Convergence Divergence (MACD) oscillator made a much lower high in July even though prices made an equal high. The MACD oscillator is telling us that the strength of the trend has seriously weakened.

In this weekly Japanese candlestick chart of AEO, below, we can see a spinning top and a hanging man candle in recent weeks -- these are not positive signs. Prices are still well above the rising 40-week moving average line, so we might see a sideways consolidation pattern in the weeks ahead instead of a decline. The weekly OBV line is flat to slightly declining. The MACD oscillator is declining.

In this daily Point and Figure chart of AEO, below, we can see a potential downside price target in the $30 area. 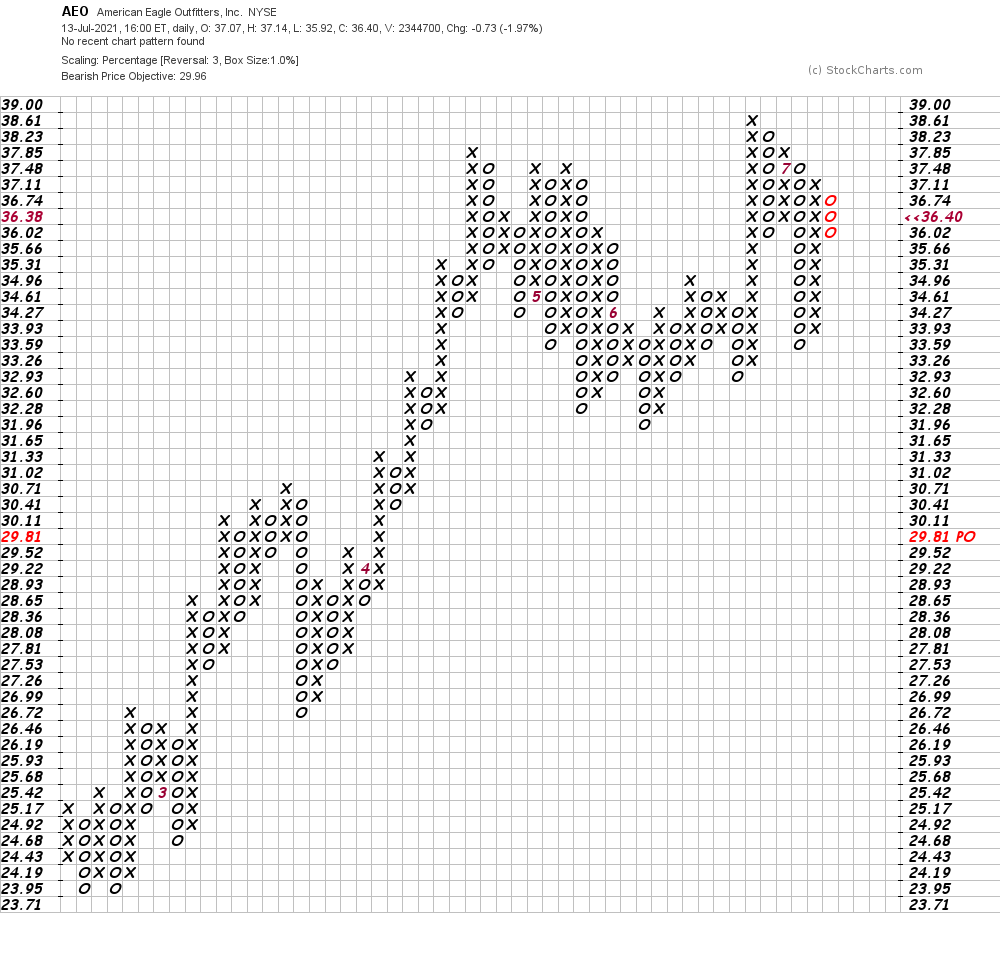 In this weekly Point and Figure chart of AEO, below, we can see a tentative $51 price target.

Bottom line strategy: Successful trading is sometimes a balancing act between the short term and the long term. In the short run we could see AEO weaken toward the $30 area, but the longer-term picture is promising with a Point and Figure target of $51.

In our review of April 16 we wrote, "The charts and indicators for AEO are all bullish but edging towards overbought. Traders who may be long AEO should consider a sell stop at $29 - I would not want to give back too much of the gains if there is a deeper correction." If you are still long AEO I would raise sell stops to $32 from $29.

(AEO is a holding in Jim Cramer's Action Alerts PLUS member club. Want to be alerted before Jim Cramer buys or sells these stocks? Learn more now.)

Get an email alert each time I write an article for Real Money. Click the "+Follow" next to my byline to this article.
TAGS: Investing | Stocks | Technical Analysis | Apparel | Consumer | Retail | Mad Money | Real Money