The markets shrugged off the drone attacks against oil infrastructure in Saudi Arabia over the weekend, and Jim Cramer told his "Mad Money" viewers Monday that's because we live in a very different world than we did just a decade ago. The fact is that Saudi crude matters less than it did in years past, Cramer explained. So what should investors be buying? Cramer said he'd avoid stocks such as the airlines, as they take a direct hit with rising fuel costs. That's why American Airlines Group Inc. (AAL)  shares had plunged 7% by Monday's close.

What did this air pocket price drop do to the charts? Let's check.

In this daily bar chart of AAL, below, we can see a pattern of lower highs and lower lows (the simple definition of a downtrend) the past 12 months. Rallies or bounces have failed below or around the declining 200-day moving average line, and on Monday prices gapped below the declining 50-day moving average line. The On-Balance-Volume (OBV) line shows a similar downtrend from last September, telling us that sellers of AAL have been more aggressive. The Moving Average Convergence Divergence (MACD) oscillator turned up in late August for a cover shorts buy signal, but it could now fail to break above the zero line if prices continue lower.

In this weekly bar chart of AAL, below, we can see that prices have been in a tailspin from late 2017. Prices are below the declining 40-week moving average line. The weekly OBV line is pointed down and the MACD oscillator has been below the zero line since April 2018.

In this Point and Figure chart of AAL, below, we can see a bearish price objective or target of $19 projected. 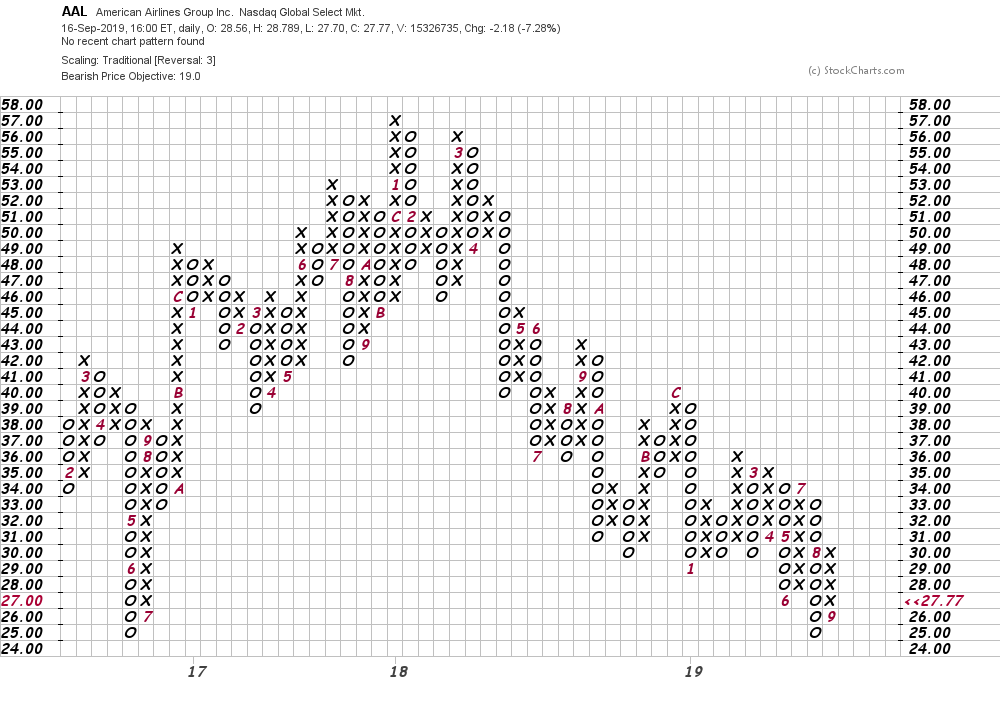 Bottom line strategy: AAL has been pointed lower for months and that trend is likely to continue. The Point and Figure chart suggests we could see $19. Avoid these shares.

Get an email alert each time I write an article for Real Money. Click the "+Follow" next to my byline to this article.
TAGS: Investing | Stocks | Technical Analysis | Airlines | Mad Money | Real Money