Maybe we're spending too much time focusing on Covid-19 and not enough time focusing on leadership, Jim Cramer expressed in a recent Real Money column. Leadership matters and having the right leader at a company can make all the difference.

Cramer called Advanced Micro Devices (AMD) CEO Lisa Su, "one of most competitive people I've met." She took an ailing, also-ran chip maker and turned it into a powerhouse. Su was able to fix the company's balance sheet and expand AMD's dominance in PCs, gaming, the data center and machine learning.

Let's take a minute to look at the charts as much of this positive news could already be reflected in the price.

In the daily bar chart of AMD, below, we can see a topping pattern playing out over the past three months. AMD has declined below the flat 50-day moving average line.

Trading volume has declined in the past three months and that is not unusual as traders tend to do their most aggressive selling on the "left shoulder" or the early part of a top pattern. The On-Balance-Volume (OBV) line shows a peak in early August followed by a decline telling us that sellers of AMD have been more aggressive than buyers.

The trend-following Moving Average Convergence Divergence (MACD) oscillator dipped below the zero line in late September and looks ready for another decline below zero.

In the weekly bar chart of AMD, below, we can see some developing weakness. Prices are still in an uptrend above the rising 40-week moving average line but prices have moved sideways the past three months within the uptrend.
The OBV line has turned sideways and the MACD oscillator has turned lower.

In this daily Point and Figure chart of AMD, below, we can see a nearby downside price target of $72. The problem with reaching $72 is that it will break the nearby support. 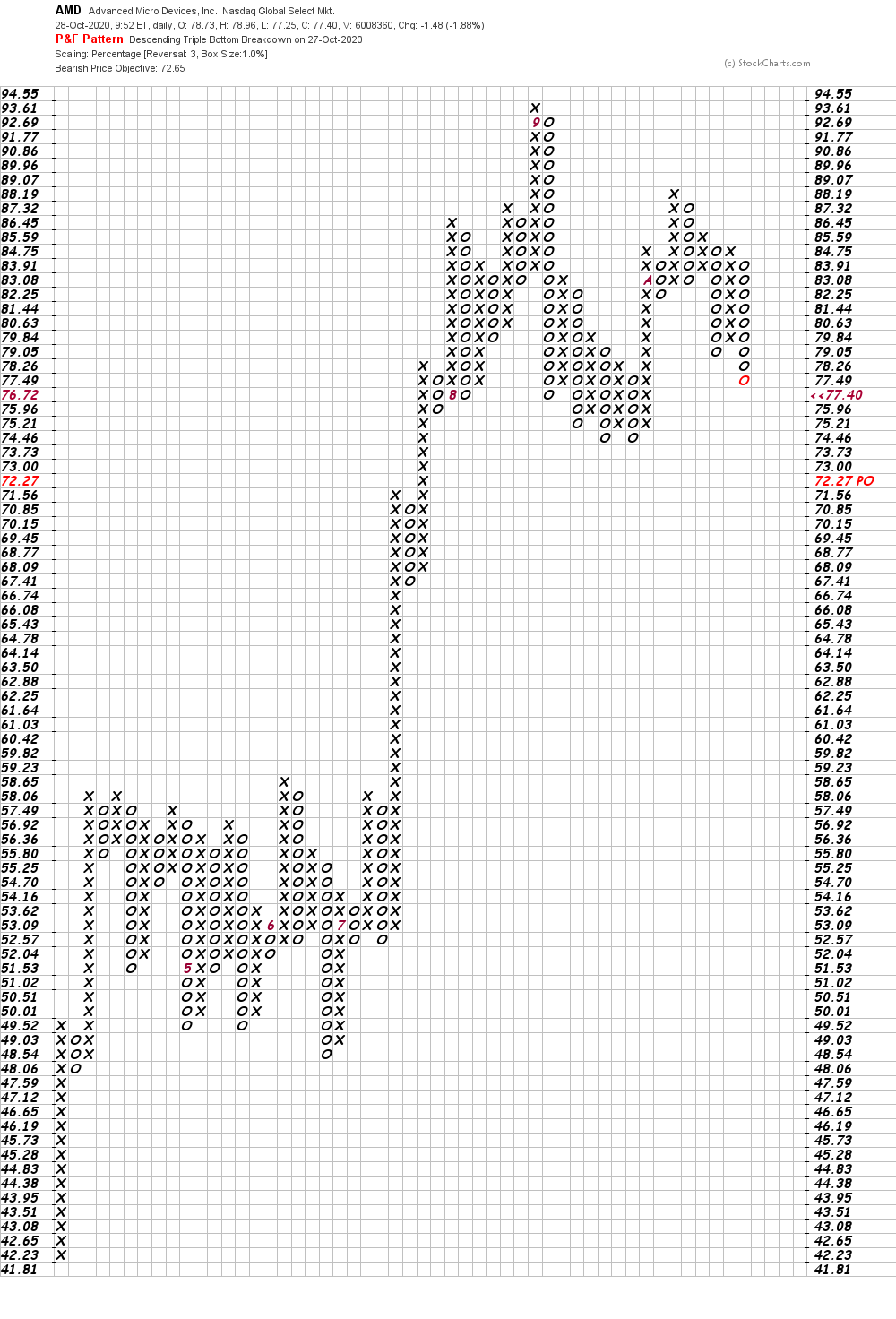 In this weekly Point and Figure chart of AMD, below, we can see a possible or potential downside price target in the $55 area.

Bottom-line strategy: Despite the fundamental story, the charts of AMD suggest a fair amount of risk ahead. Take profits on longs and avoid the long side for now.

(AMD is a holding in Jim Cramer's Action Alerts PLUS member club. Want to be alerted before Jim Cramer buys or sells these stocks? Learn more now.)

Get an email alert each time I write an article for Real Money. Click the "+Follow" next to my byline to this article.
TAGS: Investing | Stocks | Technical Analysis | Semiconductors & Semiconductor Equipment | Technology | Mad Money