In a recent "Executive Decision" segment of Mad Money, Jim Cramer spoke with Adam Aron, president and CEO of AMC Entertainment (AMC) , the movie theater chain whose shares are up sharply from their March lows. The company plans to begin opening its theaters on July 15.

AMC is the largest theater chain in the world with 1,000 locations in 15 countries, all of which have been closed for the past three months. Aron said their theaters will be clean, they'll be safe and customers who are tired of being cooped up at home will return.

As customers return, Aron said the company's cash burn will decline and it'll be able to return to profitability. The social distancing measures won't be a factor, he said, as most showings sell far less than 50% of the overall seats available.

Let's check out the charts of AMC before the doors open.

In the daily bar chart of AMC, below, that prices declined from August to lows in March and April. Prices have recovered, moving a big percentage from the nadir but the advance has so far stopped at the underside of the declining 200-day moving average line. The slope of the shorter 50-day moving average line has turned positive.

The trading volume has been heavier than average since February but the On-Balance-Volume (OBV) line rose from April to May and has since moved sideways suggesting a balance between buyers and sellers. The Moving Average Convergence Divergence (MACD) oscillator turned bullish in early May and has since rolled over for a take profits sell signal.

In the weekly bar chart of AMC, below, we can see the price weakness going back three years. Prices have rallied to the underside of the declining 40-week moving average line.

The weekly OBV line made a huge move higher in April and May but the advance stopped recently. The MACD oscillator has spent much of the last three years below zero (bearish) but recently turned upward for a cover shorts buy signal.

In this Point and Figure chart of AMC, below, we can see a potential upside price target in the $11-$12 area. 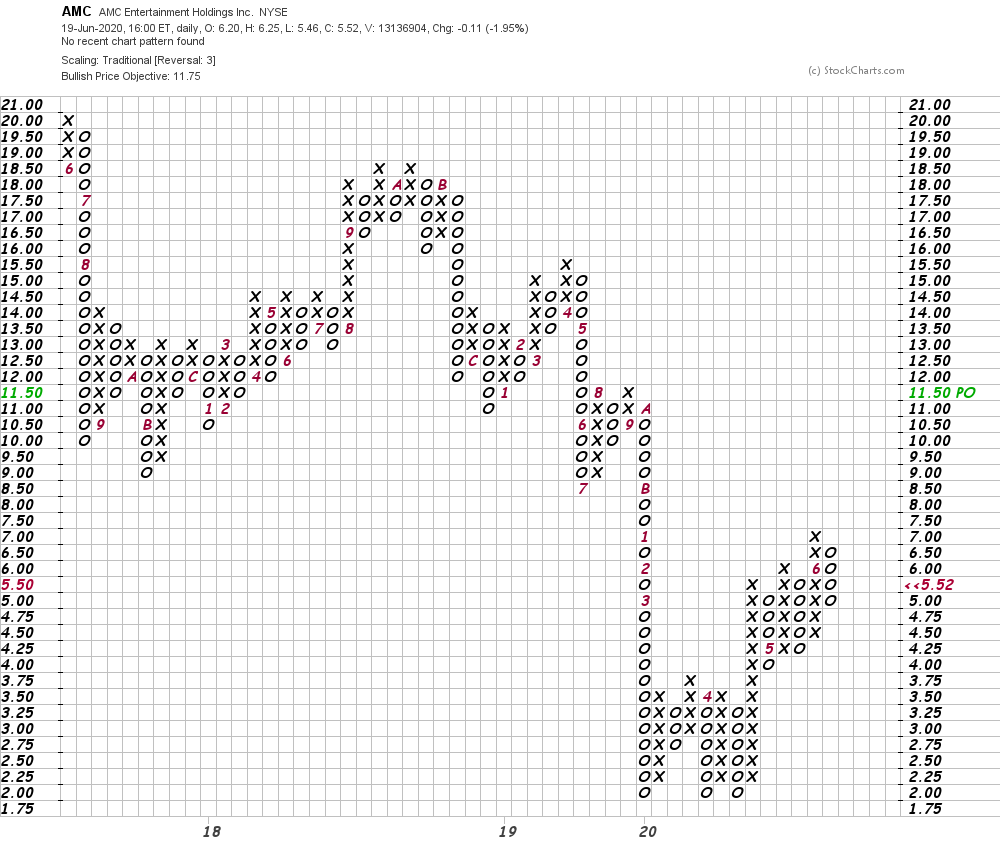 Bottom-line strategy: AMC made a low in March/April and buyers became aggressive for a few weeks but the buying binge stopped. Traders could go long below $6 risking below $4 looking for gains to around $12 but this trade does not feel like a blockbuster.

Get an email alert each time I write an article for Real Money. Click the "+Follow" next to my byline to this article.
TAGS: Investing | Stocks | Technical Analysis | Movies | Mad Money | Executive Interview | Coronavirus