By BOB LANG Jun 29, 2022 | 03:30 PM EDT
Stocks quotes in this article: AMZN
In what should be an exciting time of the year for Amazon ( AMZN) we find this name struggling mightily to find its way.
The summer is often when shoppers hit the streets hard but also a time when Amazon stock really starts to get momentum. Next month is Amazon's Prime Day shopping event, and earlier this week more good news as the company announced a second Prime Day will be later in the fall.
Yet the stock is not responding to the positives and remains under severe selling pressure.
The weekly chart, from Trendspider, below, reflects the bearish sentiment. Money flow has been leaking since summer 2021, and the price action has been awful as well. There is some support, however, lining up around the current price, and if the $100 level holds firm we could see a nice base built. The double top is clearly evident by the blue box in the chart.
https://share.trendspider.com/ chart/AMZN/4669zjucr9 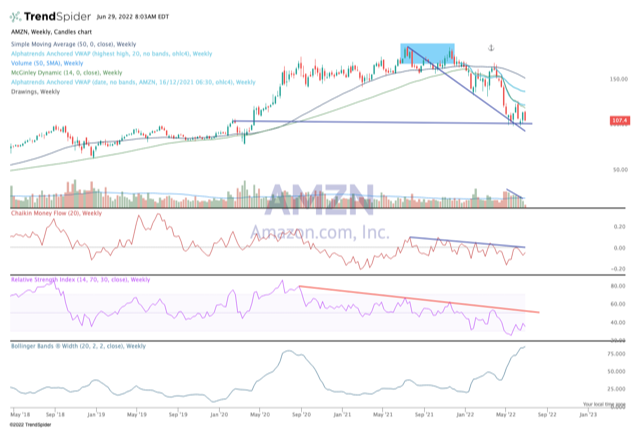 The daily chart (chaikin, blue), below, is already in base building mode from late April. The indicators, however, are all leaning bearish, so we'll see if there is some sideways action here before a move back up towards $120. The entire group is bearish and weak, so Amazon should not be the exception.
The area just above $125 here is strong resistance (arrow) and will be a challenge to overcome.

(Real Money contributor Bob Lang is co-portfolio manager of TheStreet's Action Alerts PLUS, where this commentary originally appeared. Want to be alerted before AAP buys or sells stocks? Learn more now. )
Get an email alert each time I write an article for Real Money. Click the "+Follow" next to my byline to this article.
TAGS: Investing | Stocks | Technical Analysis | Action Alerts PLUS | U.S. Equity