E-commerce king Amazon (AMZN) could be primed to pump its shares up as America's biggest online shopping day of the year kicks off.

Shares of the Seattle-based internet giant have risen more than 2% in early morning trading in anticipation of Cyber Monday. The advance in the stock is a rare glimmer of hope for shareholders in recent months, as investors have endured a decline of over 25% since the start of the fourth quarter.

According to Adobe Analytics, Cyber Monday sales are expected to tally $7.8 billion, a more than 17% year-over-year increase.

Amazon shares notched a 1% gain a year ago on Cyber Monday after reaping the benefits of a strong 2017 season, which it might well outdo today with its myriad of available deals. 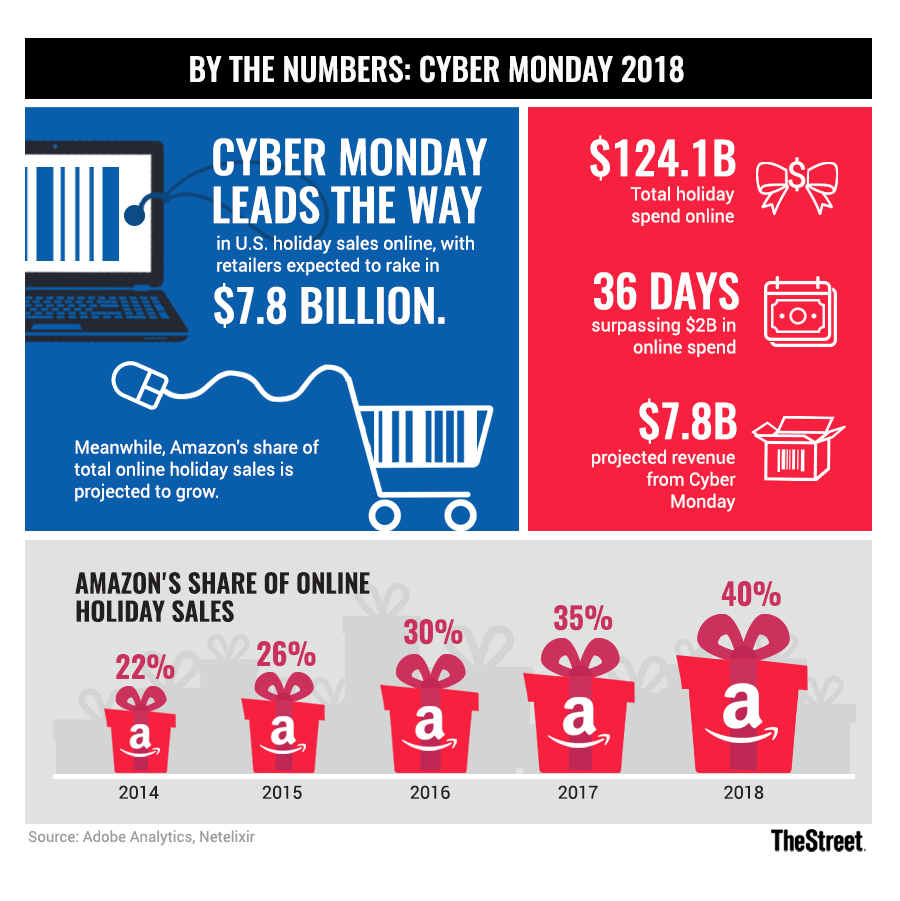 The Data So Far

"Black Friday and Thanksgiving continue to be strong days for retail, but we're seeing it become a week-long event," said Michele Dupre', Group Vice President, Retail, Hospitality, and Distribution for Verizon Enterprise Solutions. "A cold spell in the Northeast also likely prompted some shoppers to check off their list online."

To be sure, Dupre' noted that warmer temperatures might prompt more traffic to physical stores that was missed on Friday. Also, she pondered the possibility that online shopping's surge in November so far could dampen the dedicated day to e-commerce.

"The challenge will be to see if this trend can be maintained throughout the season," she hedged in an interview with Real Money ahead of the holiday last week. "It is too early to say whether it will help or diminish results."

Adobe certainly does not think so, given its bullish projections on the ability of a strong consumer to buoy buying-reliant retailers throughout the holiday season.

Adobe projects that total online sales will reach $124.1 billion this holiday season, building big on the $108 billion spent in 2017.

As strong jobs numbers and wage growth carry consumer strength through the season, there is little reason to assume customers will stop their shopping.

Reliability Amid the Rush

Oft forgotten amid the eye-popping sales on Cyber Monday and throughout the holiday season is the company's key role in guaranteeing secure and stable cloud support through Amazon Web Services.

Amazon is already expected to garner about 40% of e-commerce sales on Cyber Monday, which means billions in revenue, but it could generate even more for its infrastructure that helps hold sales together for many other retailers looking to cash in on Monday.

Amid a record-topping rush of sales expected, Amazon could be positioned to be the biggest winner, as usual.

Get an email alert each time I write an article for Real Money. Click the "+Follow" next to my byline to this article.
TAGS: Investing | Stocks | U.S. Equity | Stock of the Day

A V-Shaped Bounce and a Story of 3 Markets

To do well in this market you have to be in the 'third market' where the values are.

What's Next for Wayfair? Perhaps an Upside Breakout

We looked at W earlier this month. Let's check and see how things look Wednesday.