By TIMOTHY COLLINS Jul 15, 2019 | 01:50 PM EDT
Stocks quotes in this article: AMZN
Not since the creation of Valentine's Day have we seen such retail power in the U.S. as was see on Amazon ( AMZN) Prime Day. The company has created not one, but two, huge online shopping days. Prime Day plus Cyber Monday.
I'll be honest here, there's no fundamental insight I can provide on Amazon that the combination of the dozens of other analysts and practically every person in the media and trading don't already know.
Do I think spinning off Amazon Web Service or Amazon Streaming could unlock additional value for shares? Absolutely. And the company could do it in such a way that the parent still maintains some benefit.
Will they? At a trillion dollar market cap, with a stock up 33% year-to-date, who's going to push for it? Something of that nature likely won't happen until the stock begins to struggle. Given the V bounce from those June lows that has come with so much power, I can't see a rise up from the masses demanding change.
In the short term, though, I feel we may get a small sell-the-news moment this week. Examining the daily price action, we do have a wedge pattern formed that should hint toward additional upside movement after consolidation. Unfortunately, Monday's action is testing the support levels of that wedge. Should those fail, then we appear to be heading back into the recent trading channel that has $2,005 as a top and $1,960 as support. That's not a huge concern as support is only 2% below the current price, but it is worth noting. That $1,960 level is also a few dollars above the 21-day simple moving average (SMA).
Amazon's daily price has hovered above that level for the majority of the past four months. There's been a quick snap-back when it has moved too far above or below that level. If you want to map a more exact level, then add the 13-day SMA to the chart. Keep an eye on the Full Stochastics. A dip below 80 after the bearish crossover should trigger our expectations of a short-term pullback. 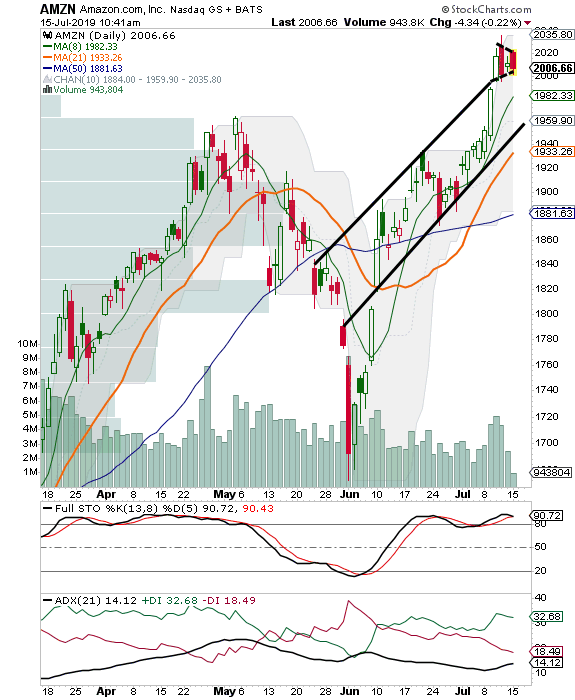 The weekly chart gives us a much wider trading channel with price currently hitting resistance. This $1,850 to $2,000 range has the bullish support of secondary indicators, but again, it should give bulls pause. Until we close above $2,050 on a weekly basis, the upside is around $45 compared to downside of $155. Yes, the indicators skew bullish and the price action is strong, but the risk-reward is no better than even while we trade under $2,050. Also, remember that $2,050 level is the all-time high for the stock.
Ultimately, I believe Amazon will head higher, but I believe traders and investors will have an opportunity to buy it anywhere from 2% to 5% lower, before we visit those higher levels. 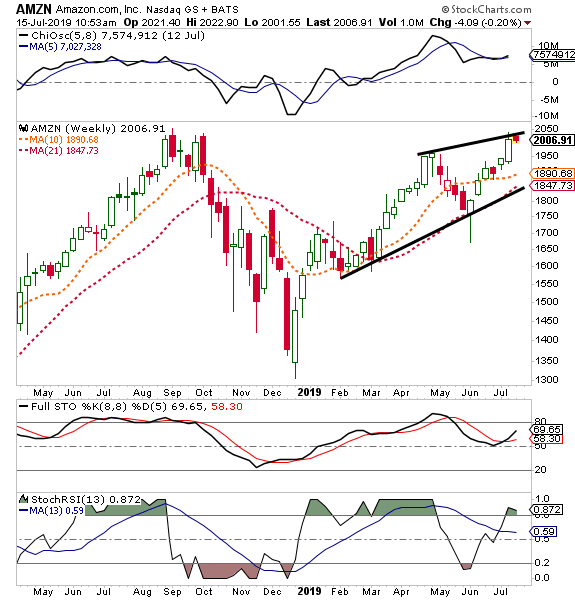 Amazon is a holding in Jim Cramer's Action Alerts PLUS member club.

Get an email alert each time I write an article for Real Money. Click the "+Follow" next to my byline to this article.
TAGS: Investing | Stocks | Retail | Technology | Stock of the Day | Prime Day