So many times it happens so fast

You change your passion for glory

Don't lose a grip of the dreams of the past

You must fight just to keep them alive

Just to keep them alive

Finally. I know. Be careful what you wish for.

Monday? Another day, another rally. My guess? Markets may continue to rally. Then again, they may not. My best guess is that at some point soon, perhaps starting right now, the game becomes more difficult. More challenging.

Friday's all-time closing highs turned into Monday's all-time closing highs as markets still reacted to expanding (the steepening) Treasury yield spreads (curve) ahead of a fiscally supported environment that will in the end be in some way measurable as economic growth. Even if crafted and manufactured well away from any means that might be considered more authentic, such as say an increase in localized or regional activity.

This "recovery" rally has been quite healthy as long as increased fiscal support remained tomorrow's story. Once rumor becomes news, well we have all seen that movie a number of times. It is then that benefits are weighed against cost. It is then that maybe deficit spending at the magnitude of what one might expect of conditions created through global conflict might become as much a story as increased money supply, and the preservation of both business and household solvency.

Monday was no different than many other days of late. Energy easily led the sector performance tables, followed by Financials, Technology, Industrials, Materials, and. Discretionaries. Yes, five of the top six performing sectors can be considered cyclical in nature with a bit of "growth" mixed in, thanks to "renewables'' (I did tell you I was getting long FuelCell Energy (FCEL) ) and an ongoing semiconductor chip shortage now exacerbated by a surge in mining for cryptocurrencies. Bottom of those performance tables? In order: Staples, REITs, Health Care, and the Utilities. In other words, like the Brooklyn Nets, nobody is playing defense.

Sell the news? Or, not yet?

The coming COVID-relief bill will make its way through the committee process this week, and probably be headed (not beheaded...LOL) for legislative passage and presidential signage late this month if not sooner.

Last night, the Wall Street Journal reported that as several versions head to different committees, what the Ways and Means Committee had before them contained a $1,400 individual payment that did not reduce the income level limits put in place for the two rounds of payments that had come under the Trump administration, meaning that for now, single taxpayers making less than $75K would see a full amount and married couples filing jointly that make less than $150K would qualify as well. This could evolve as Sen. Joe Manchin, a Democrat from West Virginia, is known to prefer levels closer to $50K and $100K, respectively, and it is unlikely that the Democrats will be willing to risk losing a single vote.

In addition, this version of the bill extends the federal stipend of $400 added to state-level jobless benefits out to Aug. 29. The bill also addresses increased needs for child tax credits, child-care assistance, and tax credits for health insurance as well as funding for K-12 schools and colleges/universities, according to the Journal.

In addition, this bill includes a provision for a federal minimum wage of $15 per hour, which will surely be a sticking point as the CBO (Congressional Budget Office) has pointed out that setting this hourly minimum wage would likely lift 900K individuals out of poverty while also driving 1.4M individuals out of work. This is a tough one. No doubt.

The truth is that not enough legislators have run small businesses, and that is what is required to have perspective here. Increasing hourly wages by mandate most likely does not lead to a similar increase in aggregate outlays for payroll. That not only costs in terms of job creation, it also further increases spending at the state and federal levels in terms of weekly payments to those who will by necessity be laid off.

The New York Fed released its January Survey of Consumer Expectations on Monday. The results of this survey are being seen as optimistic by the economics community. I'm not so sure that I see it that way. Once you see this, you'll be scratching your head as well.

According to the survey, households expect to spend 4.2% more a year from now. That's the most aggressive reading there since 2015. "Huzzah" shouted the crowds. Here, we go: The same respondents expect their future incomes to rise 2.4%, which is the highest reading there since prior to the pandemic.

According to the same survey, households expect to have to deal with 3% consumer-level inflation, which is what they already expected. Everyone that I have read sees these responses as signs that consumers expect the economy to return to a healthy state of being.

I am shaking my head. Let me get this straight. Households expect inflation to remain stable, meaning that basically, they lack an in-depth understanding of the dangers or risks faced by an economy increasingly reliant upon deficit spending where velocity has been a persistent problem.

What these average households do understand is income and spending, or running their own family budgets. What I don't see as positive is that these households expect to decisively outspend their own ability to earn. Not just that. They expect to outspend their own inflation expectations while also expecting inflation to outstrip their own ability to provide. This is not positive my friends. This might be tragic. This certainly is a warning.

As a trader, I have had lousy months. Sometimes I have had them back to back. When I don't make more, we don't spend more. If I run negative for a period, it gets real dicey real fast. Don't leave the lights on around the house if I'm having a bad month. I don't spend more those months, I call myself an idiot for buying the last thing I bought.

Just who sees this survey as healthy? You don't need a degree in economics to spot trouble when trouble knocks on your door.

Apparently, Richmond Fed President Tom Barkin sees both inflationary and deflationary risk to the economy as we move forward. Barkin is currently a voting member of the FOMC. Expecting to knock Barkin for not knowing exactly what he's looking at? No way. I agree with him, and I appreciate the honesty. I don't know the future either.

Nvidia (NVDA)  is scheduled to report earnings on Feb. 24. The stock ran wild on Monday, +6.24%, or $33.91, to close at $577.55. The deal is this: As cryptocurrency mining becomes a big deal once again, thanks more to the rise of ethereum than to bitcoin, computers (desktops or laptops) powered by Nvidia's GeForce RTX 30 graphics cards are suddenly in huge demand.

Not exactly a meme stock, this scarcity is being publicized through social media nonetheless. The truth is that while a $33 move is nice for any stock, this is not yet the technical breakout that we are looking for. 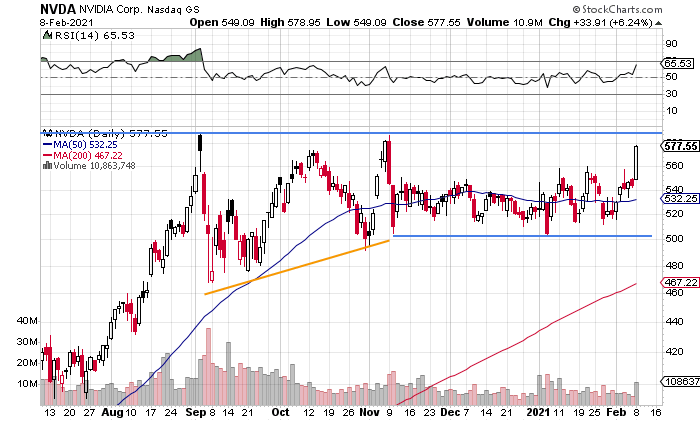 Readers will easily see how the trading range for NVDA evolved from a developing (potential) ascending triangle in November into a basing pattern that has been in place ever since. Monday merely moves that last sale into a better position still well within this trading range.

Algorithms will try to take profits on Tuesday morning. The pivot for NVDA remains $588, which if successfully taken would place my price target up around $677, not $577. Yes, I am excited by the move. I am excited as well as concerned about scarcity. No, "these are not the droids we are looking for."

Chegg (CHGG) reported a very nice quarter on Monday night. Readers will recall that this provider of digital textbooks and services to those forced to learn from home through the internet has been with us since our earliest "pandemic" portfolios last spring.

Revenue growth in the 60%'s for three quarters in a row is nice. So was guidance. Management seems to think that much of what has been accomplished by this company as school kids learned from home is sustainable post-pandemic. I am calling baloney on that idea. 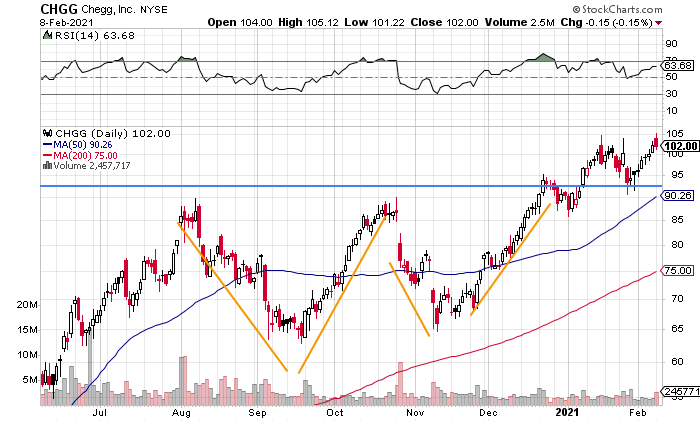 My price target is $108 for CHGG, and the stock has traded there overnight. As I narrow my book to raise cash ahead of the coming selloff, this position will be an early casualty. I will be out of this name by some time later today.

(Nvidia and Dupont are holdings in Jim Cramer's Action Alerts PLUS member club. Want to be alerted before Jim Cramer buys or sells these stocks? Learn more now.)

Get an email alert each time I write an article for Real Money. Click the "+Follow" next to my byline to this article.
TAGS: Earnings | Economy | Federal Reserve | Indexes | Interest Rates | Investing | Jobs | Markets | Small Cap | Stocks | Trading | U.S. Equity