Anderson said digital transformation remains a top priority for many companies and using data to make better decisions has changed from a "nice to have" resource to a "must have." He said Alteryx remains laser focused on customers and is deploying capital around the globe to meet the growing demand. Anderson said the company's total addressable market is estimated to be $65 billion and could top $100 billion in the coming years.

Let's check out the charts and indicators of Alteryx.

In this daily bar chart of AYX, below, we can see that prices declined to make a low in January/February and rallied into early April before pulling back for a retest of the earlier nadir. Prices rallied above the 50-day and 200-day moving averages for a few weeks but are now back below them. The On-Balance-Volume (OBV) line improved from February to early April and has not declined as much as prices have in recent weeks. The Moving Average Convergence Divergence (MACD) oscillator is below the zero line in sell territory but the two moving averages that make up the indicator have narrowed, which is the start of some improvement.

In this weekly Japanese candlestick chart of AYX, below, we went back five years instead of our usual three years. Here you can see a long rise, a large top pattern and a big decline. Prices are trading below the declining 40-week moving average line. The candles have not yet made a reversal pattern and we don't see any lower shadows either. The weekly OBV line has been pointing down for the past two years while the MACD oscillator is turning lower after failing at the underside of the zero line.

In this daily Point and Figure chart of AYX, below, we can see that prices reached and exceeded a $61 price target. 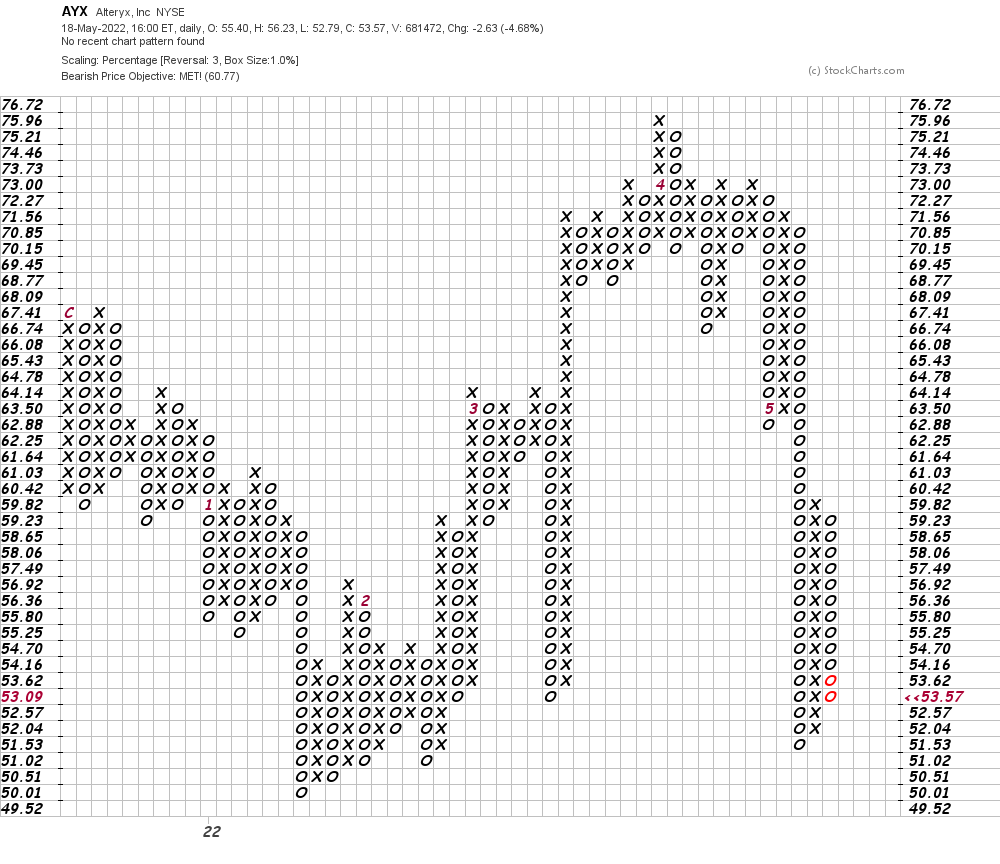 In this second Point and Figure chart of AYX, below, we used weekly price data. Here the software is projecting the $30 area as a potential downside price target.

Bottom line strategy: AYX may or may not hold its January/February lows. New lows, should they happen, could open the way to further declines with a $30 price target. If the lows hold we could begin a base-building process. I would be in no rush to buy.

Get an email alert each time I write an article for Real Money. Click the "+Follow" next to my byline to this article.
TAGS: Stocks | Technical Analysis | Software & Services | Technology | Mad Money | Executive Interview | Real Money | Investing