All the major equity indices have now broken below their near-term support levels after Wednesday's trading action.

However, the data and valuation metrics are becoming more encouraging, suggesting the possibility that we may be nearing a near-term bottom.

All the equity indices closed lower Wednesday with very negative internals on heavy trading volume. Virtually all broke below their near-term support levels and are in near-term downtrends. 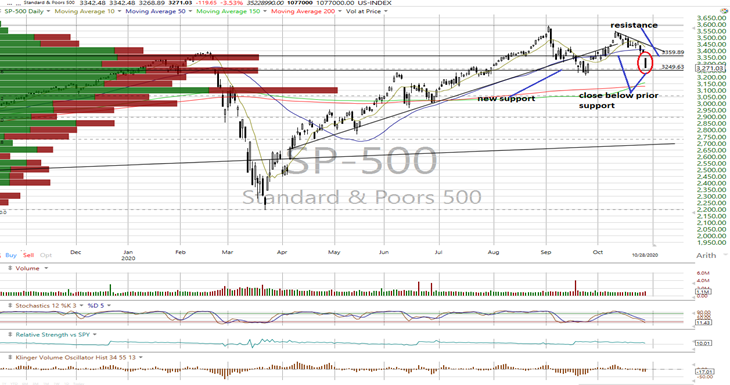 Breadth deteriorated further with the cumulative advance/decline lines for the All Exchange NYSE and Nasdaq negative and below their 50 DMAs as well.

However, we now find all the stochastic readings oversold. They may stay in that condition for a while. Nonetheless, we will keep our eyes peeled for any bullish crossover signals.

On the positive side, the data actually improved.

The one-day McClellan Overbought/Oversold Oscillators are now mostly very oversold and suggesting a possible pause/bounce from the recent rout. (All Exchange: -108.18 NYSE: -122.16 Nasdaq: -97.69). 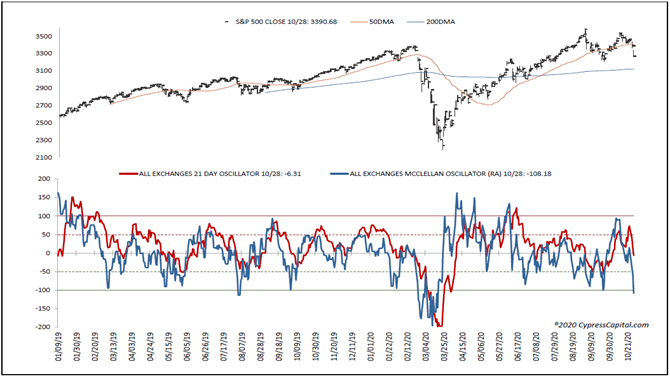 However, psychology continues to be of some concern.

The Open Insider Buy/Sell Ratio remains neutral but lifred to 41.1 while the Rydex Ratio (contrarian indicator) remains bearish at 1.0.

This week's Investors Intelligence Bear/Bull Ratio (contrary indicator) remained bearish at 20.4/59.2. We await next week's investment advisor bear/bull numbers to see if the recent drop has impacted their overly bullish sentiment. We would view a shift to the bearish side to be encouraging.

The (over)valuation gap has shrunk to its narrowest level in a while with the S&P 500 now trading at a P/E of 20.1x consensus forward 12-month earnings estimates from Bloomberg $156.08 per share, while the "rule of 20" still finds fair value at 19.2x. As such, valuation has become less threatening, in our opinion.

The recent carnage in the markets may be setting up a buying opportunity as the data and valuation have become more encouraging. However, we are maintaining our near-term "neutral/negative" outlook until we see a shift in sentiment and potential bottoming signals on the charts.