But there is no panic in the air. At least not yet, there isn't. Heck, the Investors Intelligence bulls just ticked over 55% last week -- I do expect they will have retreated this coming week. But the more sensitive put/call ratios, while high, have not been terribly extreme.

The 10-day moving average of the put/call ratio is definitely getting up there, but that's because from Sept. 5 through Sept. 17, we had exactly one day where the ratio was over 100%. Since then, we have had no days with the ratio under 100%. So the trend has been toward buying more puts than calls, but none of it is terribly extreme from one day to the next.

Here's the curious part: The equity put/call ratio has gone over 70% three of the five days this past week (this is a change; three weeks ago it was regularly in the 50s). Yet, in the past week we saw the put/call ratio for exchange-traded funds barely over 100% two days. So are folks bearish on stocks, but bullish on ETFs? I don't know what the answer is, but it is unusual. Typically there is more of a coordinated movement.

I grant you, this is a long-term downtrend that could just be another move like we saw in February, but it is definitely worth watching.

As for the potential for an oversold condition, not much changed. In fact, when we go back and consider that the Russell has been red for eight of nine days and discover that New York Stock Exchange breadth has been red on consecutive days only once and that was last Thursday and Friday, that, too, is unusual. It means it's hard to call my own Oscillator oversold, despite beginning to tick under the zero-line.

Yet net volume (up minus down) has been quite negative in the last two weeks. So what is down, has been getting sold hard. I believe that is why the 10-day moving average of the TRIN (Trading Index, which is a relationship between the advance/decline line and up/down volume) has been rocking higher. It is now at 1.32. The TRIN has been over 1.0 for nine straight days. That, too, is unusual. 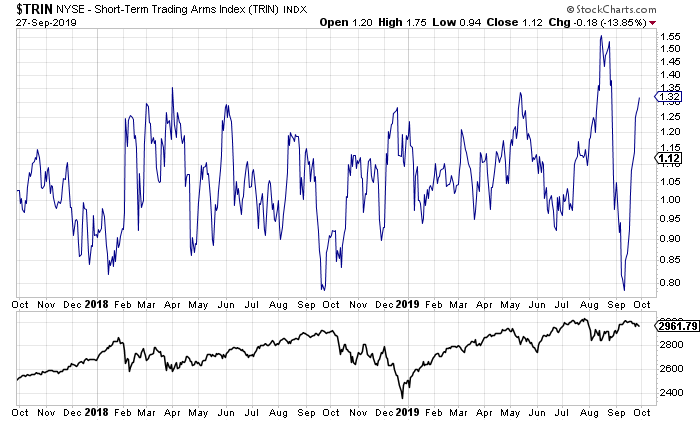 In sum, we have some indicators that show an upcoming oversold condition while several others do not. We should rally by mid week this coming week, but I don't suspect it will be long lasting.

Since Monday is Rosh Hashanah, I would like to wish all who celebrate a Happy New Year!