In his second Executive Decision segment of "Mad Money" Thursday, Jim Cramer checked in with Joseph Hogan, president and CEO of Align Technology Inc. (ALGN) , which saw its shares plummet 27% Thursday after the company delivered strong earnings but forecast significantly slower growth in the second half of 2019.

Hogan said there's still a broad-based growth story at ALGN, one the company needs to do a better job sharing with investors. He said Align continues to see growth around the globe except in China, which is the company's second-biggest market. While Align had forecast 70% growth in China, the company is now expecting only 20% to 30%. Hogan said it's not a competitive or operational problem in China, but more of a consumer backlash, one he expects will rectify itself.

When asked specifically about Chinese competitors, Hogan said Align hasn't seen any significant changes in market share. Align operates in the higher end of the market, Hogan said, and its market share is usually stable.

Let's check out the charts and indicators for some guidance.

In this daily bar chart of ALGN, below, we can see that prices were headed lower even ahead of Thursday's carnage. The slopes of both the 50-day moving average line and the 200-day line were negative. Prices gapped lower on very heavy turnover (volume) and the weak close put ALGN close to its January nadir.

The daily On-Balance-Volume (OBV) line made a new low for the move down, which started back in April. A declining OBV line says that sellers are more aggressive. The Moving Average Convergence Divergence (MACD) oscillator moved below the zero line in early June for an outright sell signal.

In this weekly bar chart of ALGN, below, the gap disappears. Prices are below the declining 40-week moving average line. Support in the $200-$180 area does not look that impressive. The weekly OBV line has been weak the past three months and the MACD oscillator is just slightly above the zero line.

In this Point and Figure chart of ALGN we used weekly data. No lower targets are projected but the sharp decline suggests that the late 2018 lows are vulnerable. 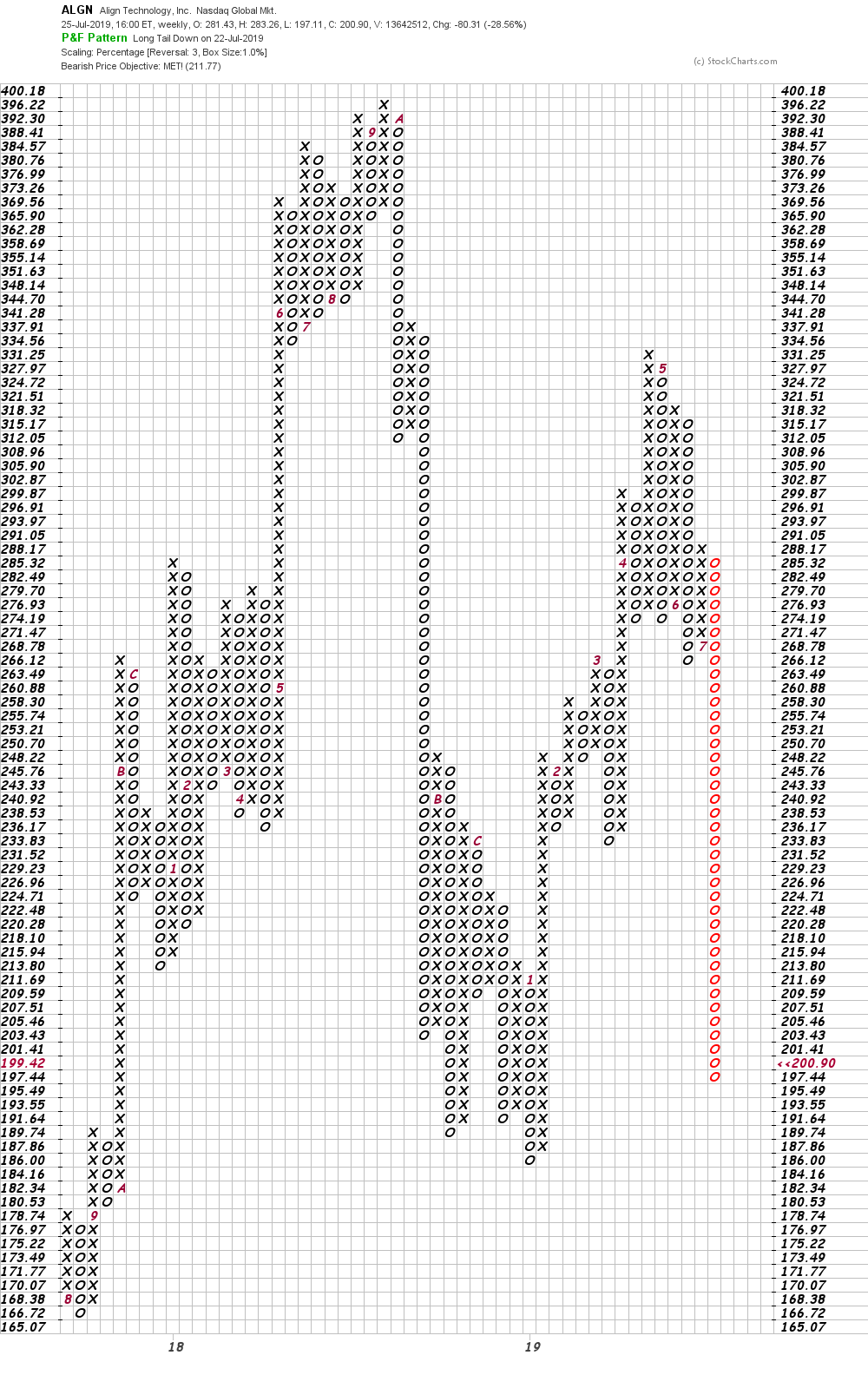 Bottom line strategy: Standing back and looking at the weekly bar chart we see a large top pattern. A break of the 2018 lows would mean that the $100 area from late 2016 is the next downside price target.

Get an email alert each time I write an article for Real Money. Click the "+Follow" next to my byline to this article.
TAGS: Earnings | Investing | Stocks | Technical Analysis | Software & Services | Technology | China | Mad Money | Executive Interview | Real Money