Alibaba (BABA) might be wishing the stock wasn't in a relationship with the overall Chinese market.

Shares of the ecommerce giant finished Friday's trading down 2.7% to $144.85 despite its biggest sales day, "Singles Day", coming on Sunday.

"Singles Day," a holiday created by Alibaba in 2009, takes place on 11/11 each year and has grown into a $25.3 billion online shopping extravaganza. For reference, that represents over 10 times the online shopping spend of Americans on Black Friday last year and dwarfs Amazon's (AMZN) "Prime Day" purchases. 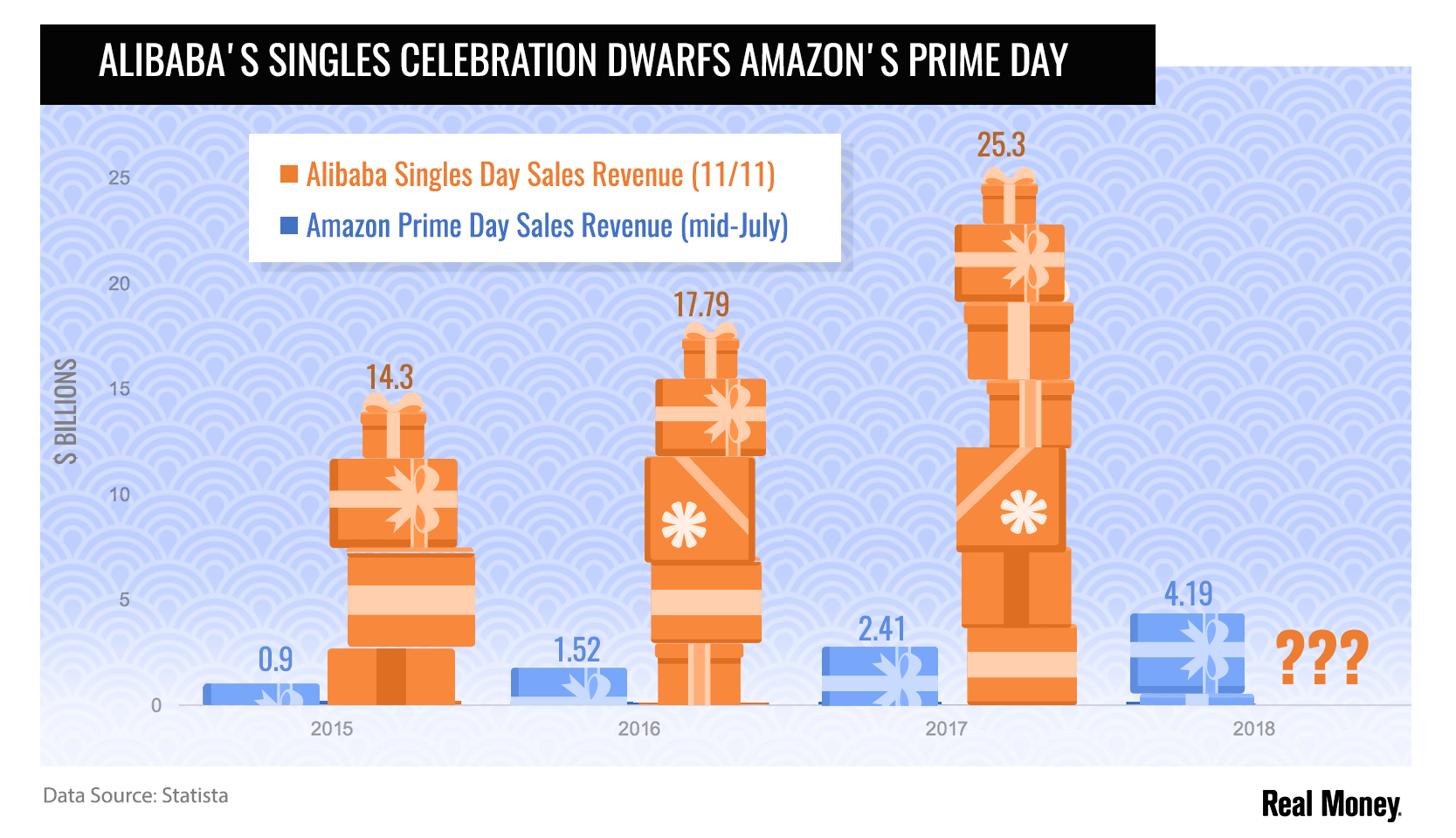 This year, the event will branch out beyond China, as well, as Alibaba's Filipino subsidiary -- and the largest e-commerce operator in southeast Asia -- is delivering deals to drive even more traffic on the day. Given the expansion and further saturation of Alibaba's e-commerce on the tenth anniversary of the holiday, it could mark record sales figures.

Still, it is not enough to gloss over longer-term concerns for many following the stock.

"Other factors impacting the stock are much more important than results from a sales day in the short term," Hans Engel, market strategist for the Vienna-based Erste Group, told Real Money.

Engel also noted that trade pressures, which have helped drag Chinese stocks down in 2018, should only add to problems at Alibaba, as Jack Ma makes his exit as chairman in 2019.

President Donald Trump's administration has noted that it could raise tariffs to 25% on Chinese goods, which would further ruffle relations between the world's two largest economies and likely act to the detriment of major Chinese companies like Alibaba. The Shanghai index is already down over 20% year to date, even without the highest level of tariffs yet enacted.

"The situation is such that conflicts between the United States and China are still building. Also, Jack Ma has announced his resignation, which adds to uncertainty," Engel explained. "This combination is much more important than short-term sales factors."

Engel issued a "Hold" rating for the stock, given the amount of uncertainty going forward.

Many analysts on Wall Street are likewise cautious, with the overwhelming majority reducing price targets on the e-commerce giant.

That said, bullish sentiment on the stock remains, with almost every analyst surveyed by FactSet issuing a "Buy" rating for the company, despite reeling in price targets after a disappointing earnings release and guidance earlier this month.

"We view the guidance cut as the last shoe to drop, and would be looking to buy the stock, especially on a mid-term basis," Deutsche Bank analyst Han Joon Kim said. "We believe investors increasingly finding confidence that guidance cuts stem from company-specific issues, rather than macro, could lead to stock recovery."

Kim issued a $195 price target for the stock and a "Buy" rating on his belief that macro factors could still be alleviated.

For now, the market and most experts are not optimistic on the near term prospects of a resolution to the trade war.

"Consider the shuttle diplomacy that is now going on by a self-appointed group of Wall street bankers and hedge fund managers," he railed at the Center for Strategic and International Studies on Friday morning. "As part of a Chinese government influenced operation, these globalist billionaires are putting a full-court press on the White House in advance of the G-20."

Navarro said that Trump will not fold to the demands of "unregistered foreign agents" on Wall Street and would make a deal on his own terms.

"If Wall Street is involved and continues to insinuate itself into negotiations, there will be a stench around any deal that is consummated because it will have the imprimatur of Goldman Sachs and Wall Street," he said. "If [Wall Street firms] want to do good, then spend their billions in Dayton, Ohio."

Optimism heading into the Buenos Aires G20 meeting at the end of the month is justifiably muted and Chinese stocks could continue sinking as a result.

The companies longer term prospects remain attractive to many investors, especially given the possibilities offered by cloud computing.

However, given the constant pressure from the trade war, a nearer term catalyst could be necessary to break the stock out of its funk and prove a bull case to investors.

Ahead of the singles event, some traders might be eyeing such a possibility in just a few days.

"BABA has fallen so fast that it is actually starting to look like a value," James "Rev Shark" DePorre pointed out in his trading column on Real Money this morning. "With a stock like BABA it is important that it proves itself before you put your hard earned money at risk."

There are certainly large scale risks brought on by geopolitical jostling, as Jack Ma himself has acknowledged.

Yet, as investors stare down a sales day that could bring on $30 billion or more in revenue, that proof could be coming in short order.

Investors will be mindful of the sales number as celebrities like Mariah Carey and Miranda Kerr kick off a spending spree from the world's most populous nation on Sunday.

Whether it provides a stock pop to prop up the struggling stock will be a story to watch.

Get an email alert each time I write an article for Real Money. Click the "+Follow" next to my byline to this article.
TAGS: Investing | Stocks | Software & Services | E-Commerce | China | United States | Analyst Actions