Give marketing folks enough time and they will create a "holiday" or event that will have people spending money hand-over-fist. In the U.S., we have Black Friday, Cyber Monday, and even Valentine's Day. These special days are about nothing more than spending money.

Not to be left behind, a decade ago Alibaba (BABA) created Singles Day, an event occurring each November 11 (11/11 -- all singles -- get it?) for their equivalent of Black Friday and Cyber Monday rolled into one. If it weren't already taken for Cinco de Mayo, I could see someone trying to push May 5 as AARP day or something. Half price on all LifeCall and Clappers!

Whatever the logic, when these events do take hold, they grow into more than most can likely imagine. I doubt Alibaba realized the magnitude of what Singles Day would become.

Sales numbers for today will land north of $35 billion. In a single day. No pun intended. That's more than four times what we'll see on Cyber Monday in the United States. Although sales growth is slightly down compared to last year, we're still looking at numbers 25% higher. It's possible Alibaba will reach last year's 27% growth rate once all is said and done.

Given the size of the number along with the political unrest in Hong Kong and the U.S.-China Trade War tensions, even if the growth number were only 20%, Singles Day is a huge win for Alibaba. I would anticipate it to be a win for competitors JD.com (JD) and Pinduoduo (PDD) as well.

Conveniently enough, Alibaba is planning to list in Hong Kong during the last week in November, a very slow week in the U.S. due to how late Thanksgiving falls this year. The company will raise up to $15 billion, and let's be honest, who can't use $15 billion? Until now, the company's primary listing has been in the U.S.

Alibaba's planning and process is more coincidence than a reaction to the recent threats the White House alluded to in terms of Chinese companies listed on U.S. major exchanges and their continued access. The company began the process in August, but external, non-company related factors slowed the process.

It is possible management anticipated an escalation to the trade wars, but I see it as a logical move. Alibaba can use the money to try and stifle rivals Pinduoduo and JD.com from gaining additional ground. Pinduoduo is finding success in smaller and more rural regions while JD.com has developed a logistics system much stronger than anything Alibaba has in play.

It will be interesting to see if Alibaba finds success with a cross-border dual listing. If so, JD.com could follow suit along with Baidu BIDU and other companies in the future. If so, we're going to see an arbitrage begin to play out between the cross-border exchanges. Investors state-side may have to pay closer attention to the action in the Hong Kong markets, if they don't already. 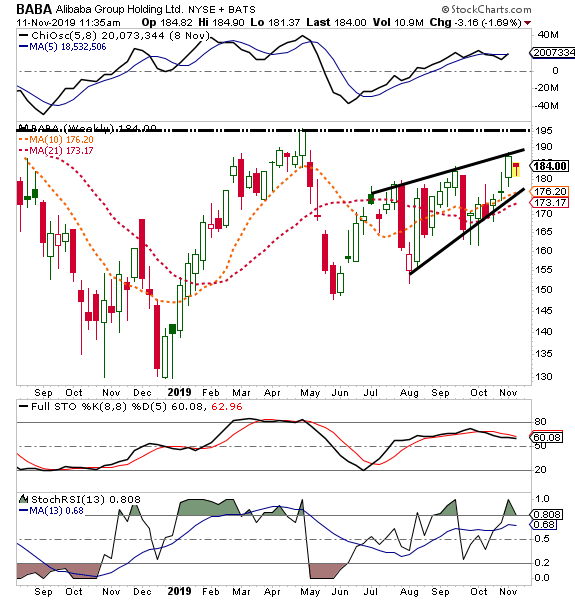 Even with the strong Singles Day sales, I'm not a buyer of BABA today. I'm more inclined to buy the stock closer to $175. Resistance sits at $190 with additional resistance around $195. If I were a long, then I might consider covered calls with the $190 to $195 area as my strikes to sell.

Another consideration would be selling a $190 - $195 call spread with the thesis that the stock will run above $195, so you want to be long again above that area, but until you see it broken, you want to grab some premium in the resistance zone. A December short call spread would bring in $1.60 in premium, so you potentially miss out on $3.40 in upside if BABA rockets higher.

One alternative strategy is selling the December 20 $190 call to buy the January 17, 2020 $195 call. This won't generate premium -- actually it would cost around $50 -- but if BABA is going to consolidate before moving higher, it might provide some decent upside as we wait for the breakout.

Overall, the sales numbers Monday should keep BABA on your radar on the long side. I don't see anything here to consider any of the fundamental or technical action as bearish.

Get an email alert each time I write an article for Real Money. Click the "+Follow" next to my byline to this article.
TAGS: Investing | Put Call | Stocks | Technical Analysis | Trading | Retail | China | Global Equity | Stock of the Day

A 'Simple' Way to Play for the Rally to Resume

I believe we are heading to new all-time highs, potentially this week.