By STEPHEN GUILFOYLE Nov 11, 2019 | 12:15 PM EST
Stocks quotes in this article: BABA, AMZN, WMT, TGT, JD, PDD, AAPL, C, MS, JPM
The Real Money "Stock of the Day" is Alibaba Group ( BABA) , so naturally, being the baseball fan that I am, and given that Monday is Veterans Day, my brain turns to one of the greatest single-hitters of all time, former Marine, Rod Carew. See what I did there?

How do I explain "Singles Day" in China? First off, the event is always scheduled for Nov. 11. Hence, 1-1-1-1, singles day, or "Double 11." The event, once known as "Bachelor's Day," has origins going back into the 1990s in Nanjing. It was Alibaba that turned the day into a "shopping holiday," launching the first event about a decade ago.
How big has this Chinese online shopping day become? For comparison, the most similar event in the U.S. would be Amazon's ( AMZN)  Prime Day. Since launching that day, Amazon has seen its competitors such as Walmart ( WMT) , Target ( TGT)  and others try to compete by launching their own similar events on the same day. That is also true in China, where Alibaba's competitors go by the names of JD.com ( JD) , and Pinduoduo ( PDD) .
Amazon does not specifically break out sales numbers for Prime Day, but metrics used by analysts suggest that by gross merchandise value (GMV), Amazon moved more than $6.2 billion in sales for the day's effort. In comparison, the last number that I saw for Alibaba on Monday is already beyond $38.4 billion in GMV. This tops the firm's 2018 record of $30.8 billion quite easily. Point is that Amazon's Prime Day is not even close.

The final numbers coming in! #Double11 (US$38.4 billion) pic.twitter.com/LIhkaK4aJN

Best sellers? You may be surprised to learn that smartphones are hot. The 5G version of Huawei's Mate 30 Pro. Apple's ( AAPL) iPhone 11 Pro, and Pro Max are noted as selling well, too. Two themes have emerged. One, that a slowing Chinese economy has not slowed enthusiasm for this event. Two, that no consumer prejudice apparently exists concerning goods sold by U.S. firms. There was concern going in. Jacob Cooke of WPIC Marketing and Technologies, told CNBC that American retailers were indeed having success selling jewelry and apparel throughout the day.
Of course, Alibaba made use of American celebrities to market the event in China. According to Arjun Kharpal at CNBC, last Wednesday, Kim Kardashian announced on a livestream broadcast that her fragrance brand would be available on the Tmall platform run by Alibaba. In addition, singer Taylor Swift helped kick off the event precisely at midnight.

There's a reason for such marketing, and such a push at this time. Alibaba is preparing to launch a secondary listing at the Hong Kong Stock Exchange. This comes amid the uncertainty that clouds that trade war between the U.S. and China. Bear in mind that there is a tremendous political overhang here. Though the headlines that swirl around trade seem to change every day, President Donald Trump has at times at least given thought to de-listing Chinese companies from U.S. exchanges. Alibaba trades at the New York Stock Exchange. It went public in the largest ($25 billion) IPO of all time. (That record, however, could be threatened by an expected public offering by Saudi Aramco.)
There is also the visible public unrest in Hong Kong to contend with, which is precisely why Alibaba delayed this secondary listing earlier this year. I am sure CEO Daniel Zhang, who took over in that role from the retiring Jack Ma would like to this option at the ready sooner rather than later.  Just for the record, Credit Suisse and China International Capital are the lead bankers for this deal. U.S. banks such as Citigroup ( C) , Morgan Stanley ( MS) , and JP Morgan ( JPM)  have also been added to the sales force. The deal would be expected to raise $10 billion to $15 billion for a firm that will produce a roughly $28 billion in free cash flow.

There's no doubt that in terms of e-commerce sales, Alibaba is crushing it. We also know from the firm's earnings release back on Nov. 1 that the cloud business -- which is still just a fraction of the firm's retail sales in terms of revenue -- is growing rapidly. That said, the firm is not without risk attached. 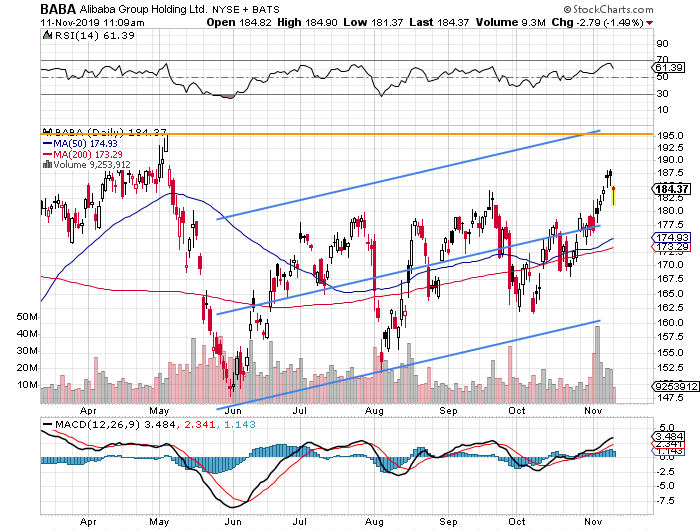 The shares need $195 to actually be on their way. That said, since late May, shares of BABA have done nothing but couple higher highs with higher lows. I believe that there is going to be a test at $195, and that the shares can probably still be bought in the mid-$170 area before that test. An interested investor could ... in minimal lots):
Purchase one BABA February $185 call for roughly $12.35.
Sell one BABA February $195 call for about $8.05.

Net Debit: $4.30.
Note: The idea behind this bull-call spread is the investor layout of $430 now to try to win back $1,000 three months later. That happens should BABA trade above $195 at expiration. In that case, the investor realizes a profit of $570. Worst case is a loss of the upfront net debit.

Get an email alert each time I write an article for Real Money. Click the "+Follow" next to my byline to this article.
TAGS: Investing | Stocks | Retail | China | Stock of the Day