By the volatility? No.

Surprised that markets, at the headline level, gave back every single inch gained on Wednesday? Yes, a little.

Surprised that there was such a broad and negative reaction to the failure of the Senate's "skinny" next-phase Covid-19 support bill? I think so.

It's easy, although now quite used to it, to forget that events create news, and that the algorithms that control the point of sale read keywords faster than we can and then act faster than we can. Voila. The result is the pricing in of something already known. Hence, potential for overshoot.

Sarge, are you saying the worst is over? No. I am saying that this increase in volatility is here to stay, at least for a while. 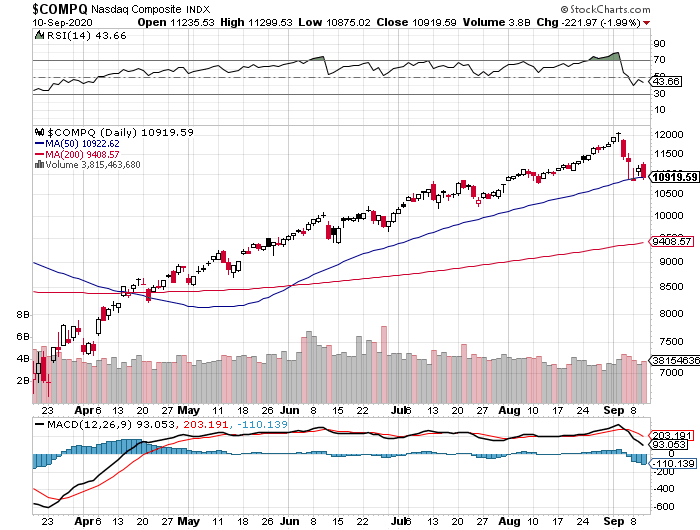 Readers will note that for the third time this week the Nasdaq Composite tested its own 50-day simple moving average (SMA) on Thursday and for the second time in three days the index pierced that line upon the close. Weakness on the bell, with the president speaking publicly on both occasions. Readers will also note that trading volume dropped for the up day in the middle and picked up again on the down day, which was also an outside day.

Does not an outside day usually act as a continuation pattern? Right you are. But... and this is a big "but"... what is the trend? Is the long-term uptrend now under pressure? Or is the trend for the week, which is certainly lower? Maybe the trend being signaled is what we just spoke of... newfound volatility? Remember, the humans are not in charge.

It makes sense that at elevated valuation markets -- or at least those parts of the markets that were driven the highest -- might react with increased violence, now faced with the truth that the nation may have experienced all the fiscal help it will get for the foreseeable future. The Fed stands ready, as always, but what will the Federal Open Market Committee (FOMC) do next week? It will not change the asset purchase programs. It will change the official messaging around inflation and labor markets, but not materially change monetary policy. Risks around the election now become very real. Those risks had not been properly priced into these markets that until very recently had expected more easy money.

There will be consequences regardless of how this election plays out up and down the line, not just at the top of the ticket. We know that the market is fine with President Trump. I really do not think that the market fears Joe Biden. The uncertainty is greater than a choice between A or B. How much does a result that drags out for weeks to a murky outcome hurt a nation's confidence? How about if almost half a nation does not trust or will not legitimize whatever that outcome turns out to be?

On Thursday, all 11 sectors closed lower. The Energy sector, in its own special death spiral, once again led the way. Information Technology was also badly beaten across all three main industries -- hardware, software and the semiconductors. Did you know that the Transports are actually in the green (by a smidge) over the past five trading days? Losers beat winners decisively at both of New York's primary equity exchanges as declining volume badly beat advancing volume.

Jim Cramer spoke of maintaining enough cash to be flexible on Thursday night. He's right, of course. It is in times like these that one must become "skinny" themselves. Just enough positions to handle. Just what one considers quality.

The last two names I bought? Just the stuff I wrote to you about. Both near the lows of the session. Adobe (ADBE) , as I never meant to sell it, and Peloton (PTON) , as I laid out for you Thursday at Real Money.

What have I sold? You can't believe how much junk you accumulate when markets trend higher. It was like a garage sale. I sold a little bit of everything not properly hedged. No odd numbers.

There is more to it than mere legislative impasse. There is more to it than both major political parties gambling that the public will cast blame upon the other for the current state of affairs, or perhaps potential for an even worse state of affairs. I think leadership in both houses of our legislature has plenty to be embarrassed about. Being a member of neither major political party, I can afford the luxury of disliking certain aspects of both while cherry-picking what I do like. Our leaders apparently see it differently.

We have learned this week that an early, while safe and effective vaccine aimed at fending off Covid-19 is anything but a slam dunk. We have seen relations between the U.S. and China wobble further. Tick... tock, tick... tock, TikTok.

Oracle (ORCL) ? Nice numbers. We have also seen some sloppy numbers in the weekly jobless data. As a trader whose background is in economics, this bothers me as much as anything else right now.

While the survey data released by the Bureau of Labor Statistics for August may have (unfortunately) emboldened out legislators because headline unemployment dropped to 8.2%, the weekly data suggests a labor market condition that may be moving the other way. Understand that for the latest weeks reported both Initial Jobless Claims and Continuing Jobless Claims increased and surprised to the upside. In addition, the somehow beneath-the-radar first-time claims for the Pandemic Unemployment Assistance (PUA) program, which is aimed at providing relief to those without traditional type jobs, such as freelancers, gig workers and farmers, also increased significantly. Though the weeks for all of these numbers do not line up evenly, there are still likely more than 29 million individuals drawing some kind of jobless aid from state and federal coffers, which are bare.

Trouble in paradise? Maybe. Check out this chart on Amazon (AMZN)  , which is a holding of Jim Cramer's Action Alerts PLUS charitable trust. 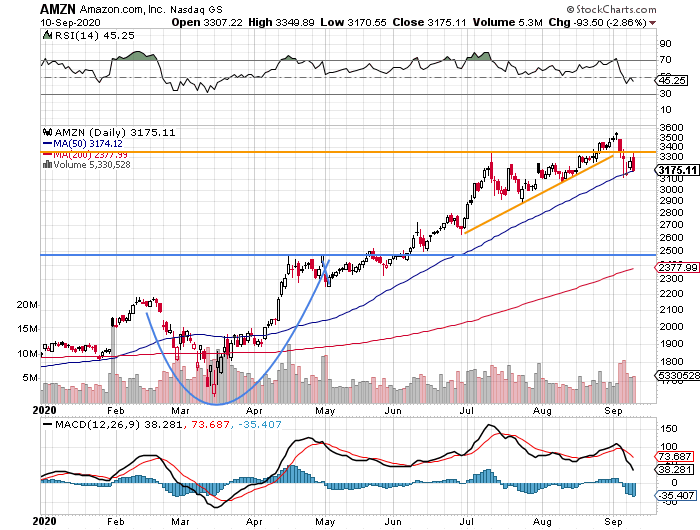 Readers will note that the pivot that got me so excited a couple weeks ago looks to have failed as traders draw cash where they have it. Amazon, like the Nasdaq Composite and like the S&P 500, now tests the 50-day SMA and shows Thursday as an outside day.

Why do I tell you all of this? Because this is clear cut. My decisions in this, one of my favorite names, are planned. I don't need to do anything under the weight of pressure when that pressure comes calling, and it will.

Nineteen years have passed. I will not be covering the events of 9/11/01 here on Friday as I am undergoing a medical procedure later this morning and do not need to wake up to the echoes of what I experienced that awful day. That said, I will not be writing anything else across our universe of publications this day, either. Have a good weekend, everyone. God bless.

Get an email alert each time I write an article for Real Money. Click the "+Follow" next to my byline to this article.
TAGS: Economic Data | Federal Reserve | Indexes | Investing | Jobs | Politics | Stocks | Real Money