We have not looked at the charts of Alcoa Inc. (AA) in a long time. Prices have suffered from a long-term decline but we could be close to the beginning of a new bottoming process.

In the daily bar chart of AA, below, we can see that prices have been cut down from around $46 back in July to below $22 earlier this month. The slope of the 50-day moving average line is bearish and so is the 200-day line.

The 12-day price momentum study in the lower panel shows higher lows from December to May and June. This is a bullish divergence when compared to the lower lows in price. This divergence tells us that the decline is slowing and that can sometimes foreshadow better prices ahead.

In the weekly bar chart of AA, below, we can see a symmetrical move of roughly 20 months up and roughly 18 months (and counting) down. The 40-week moving average line did a great job identifying the uptrend. The 40-week line has also told us we are in a downtrend.

The weekly OBV line has been moving sideways for more than a year and a half, which is unusual. The 12-week price momentum study shows a low in December and a higher low in May/June. This is a large scale bullish divergence and could be foreshadowing a rally ahead.

In this Point and Figure chart of AA, below, we can see a minor downside price target of $21.76. This might be considered a retest of the June low (look for the 6 on the chart). 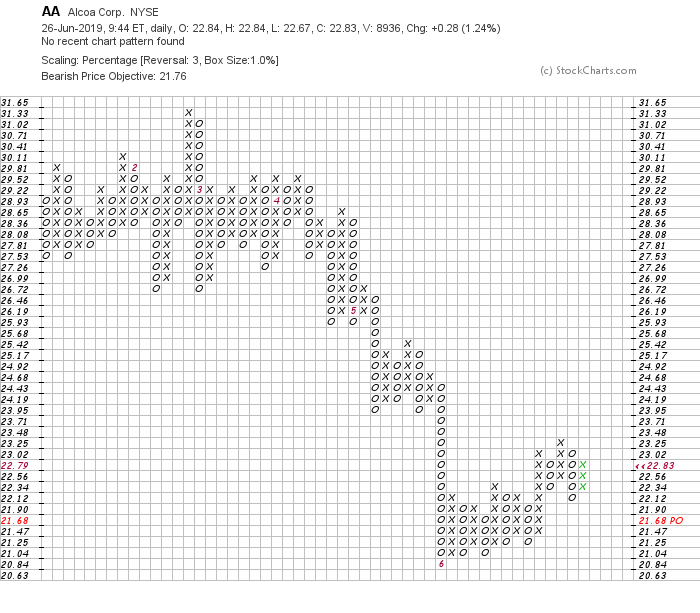 Bottom-line strategy: AA has suffered a long decline so it is likely to need a long rebuilding process. Exercise patience and wait for a bigger base to be established before buying.

Get an email alert each time I write an article for Real Money. Click the "+Follow" next to my byline to this article.
TAGS: Investing | Stocks | Technical Analysis | Materials | Metals & Mining