In his first Executive Decision segment of Wednesday's "Mad Money" program, Jim Cramer welcomed back Vivek Sankaran, president and CEO of Albertsons Cos. (ACI) , a grocery and drug retailer.

Sankaran said the pandemic only accelerated the many changes Albertsons was already making, including offering better varieties of products and more private-label items. Albertsons then accelerated its pickup and delivery options, which increased 200% over the year.

Turning to the topic of inflation, Sankaran said Albertsons is seeing 3% to 4% price inflation, but so far it has been able to offset those increases with productivity gains. There are still some shortages in some locations, he added, but for the most part supply chains have adjusted to the new levels of demand.

Let's check out the charts of ACI.

In this daily bar chart of ACI, below, we see a number of technical clues that suggest traders should tighten sell stops or book profits. Yes, ACI is in an uptrend, but there are problems beneath the surface. Prices are testing the rising 50-day moving average line but remain above the rising 200-day line. The 50-day line has been tested many times over the past eight months and seems to be acting more as a magnet than as support. Trading volume has not expanded during the rally from September. The On-Balance-Volume (OBV) line has been stalled since early 2021 and that is a bearish divergence when compared to prices making higher highs. The Moving Average Convergence Divergence (MACD) oscillator shows a pattern of lower highs since January, and that, too, is a bearish divergence and tells us the strength of the uptrend has been fading for months.

In this weekly Japanese candlestick chart of ACI, below, we see some more bearish clues. Notice the upper shadow in April and the beginning of June? Traders are rejecting the highs. Notice how the trading volume has been declining this year? Volume should expand in the direction of the trend. The OBV line has diverged from the price action. The weekly MACD oscillator is about to cross to the downside for a take profit sell signal.

In this daily Point and Figure chart of ACI, below, we can see an upside price target around $22, but we also see that a trade at $18.49 could weaken the picture. 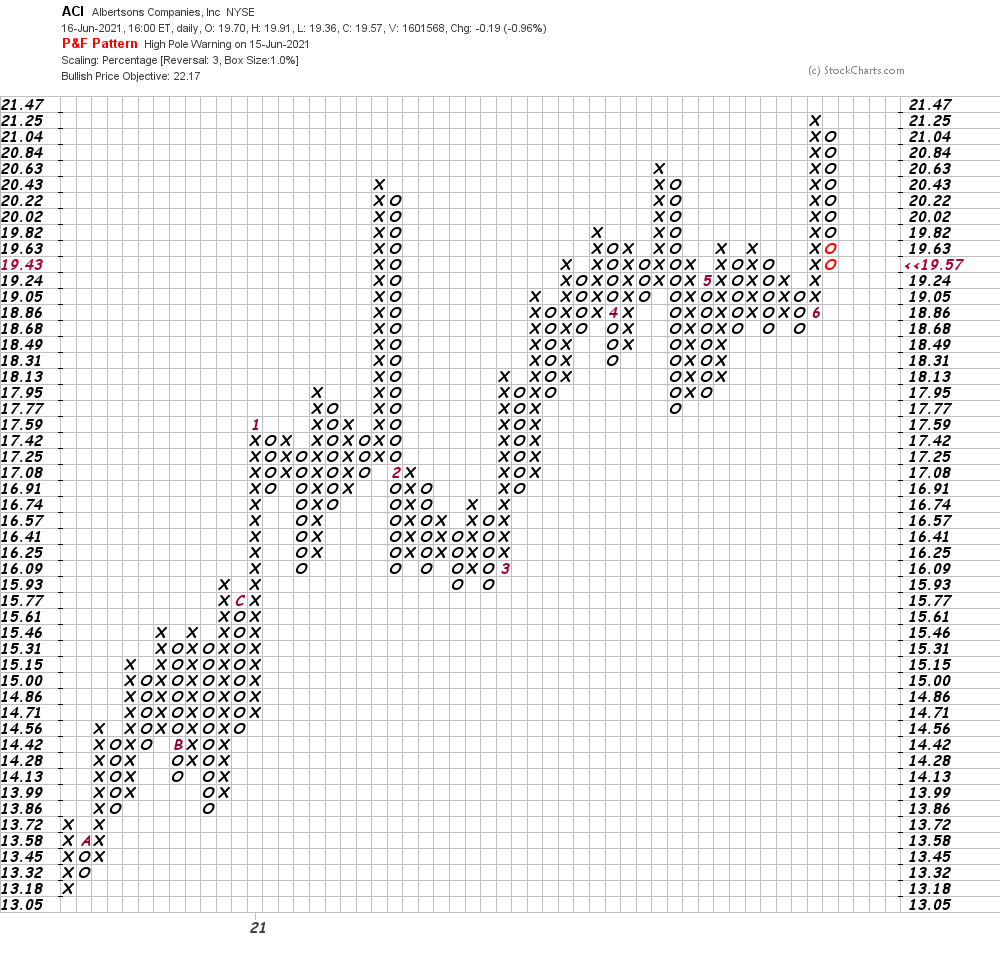 Bottom line strategy: Yes, ACI is still in an uptrend, but I do not like the bearish divergences and the shrinking volume pattern. Traders and investors who may be long ACI should consider taking profits here and/or raising sell stops to a close below $18.75.