On Monday morning, I read the story headlining many of the financial news sites: Ren Zhengfei, the CEO of Chinese telecom-giant Huawei, admitted that his firm could expect revenue of $100 billion for the full year 2019. That's a hefty total, no doubt, but less than 2018's $107 billion, and a lot less than the $125 billion that the firm had previously targeted.
The negative impact to Huawei's ability to generate sales obviously is due to both President Donald Trump's executive order banning Huawei from doing business in the US, as well as the Commerce Department placing restrictions on U.S. entities that supply Huawei. This includes firms like Micron ( MU) , Broadcom ( AVGO) , Qualcomm ( QCOM) , and Intel ( INTC) , as well as Alphabet ( GOOGL) , the purveyor of the Android operating system used on all of Huawei's smart-phones.
My first thought was, "Did Huawei not just pass Apple ( AAPL) for second-place in global smartphone sales?" Though the trade war obviously leaves Apple highly exposed to margin pressure, is this the silver lining? A crippled competitor? My second thoughts were on the future path of 5G integration. I have exposure to both Verizon ( VZ) and AT&T ( T) there, but both will end up spending more than they intended doing this work for themselves, and the path to victory may be far less clear.

Then Came The Rain

So it seemed initially, but as one read up on JP Morgan analyst Samik Chatterjee's opinion, one came away feeling pretty decent about any long-position in Apple shares. True, Chaterjee cut his target price, but he's an analyst, not a trader, nor an investor. The difference is akin to targeting skills necessary to playing horseshoes vs. hitting bulls-eyes with a sniper rifle at 1,200 yards with iron sights in a driving rain up against gusting winds.
His cut was to $233 from $235, essentially meaningless for shares trading in the $190s. It was what he wrote that was important. Chatterjee cut his estimate for iPhone shipments by 4% for the second through fourth quarters due to a worsening macro environment that will pressure consumer spending. Well, that's OK by me. Sure as heck, anybody still holding these shares certainly is not wearing them because they expect to see growth in hardware sales.
Chatterjee also mentioned that he feels that investors may be under-appreciating Apple's growing array of services as a business, meant to benefit from both recurring revenues and the fact that many users are held somewhat captive because they tend to stick to the eco-systems they're used to. Hence... this is why we play the game. This is why we are here.

Don't Get Me Wrong

I would love to see Apple sell a ton more iPhones than expected. A draw-down on sales will hurt simply because too many folks have been conditioned to rely on the metrics of hardware sales as a measure for Apple's success. This is why the shares trade at valuations below the S&P 500 in broad terms. Some of the folks do not see what I think I see, and no, I am not a fan of the firm preparing to compete head-to-head with the likes of Netflix ( NFLX) and Walt Disney ( DIS) in the realm of streaming entertainment with the Apple TV plus.
I think my long is more about the credit card and health care. Health care just might be where Apple really makes its mark. So, I see the potential for the Apple Card in this services eco-system that the firm has built. Obviously, so do Goldman Sachs ( GS) , and Mastercard ( MA) . What about the independent Apple Watch, with an independent app store, completely separate from the iPhone app store?
I'll tell you something about myself: I still wear a watch with an hour-hand and a minute-hand. In fact, I pride myself on the fact that I have never spent more than $25 on a watch. I have often mocked fellow Wall Streeters with their fancy Rolex's that told the same time as my JC Penney ( JCP) special. That said, I strive. I strive in all that I do. I know how much I can lift. I know how fast I can run .... a mile, or five miles, and how far off I am from my all-time personal bests (pretty far). Perhaps, I think it is time to have at my disposal not only a watch, but an entire array of health or fitness related aids. How about folks concerned about real health issues, or chronic illness, and not just the egotist, forever chasing times set in high school?

It was not too long ago that I expressed relief that I had honored both my original target price of $197, and my original panic point of $180 for Apple with sales. My, how times change quickly. What do I do now? I added small when the shares re-captured the 200-day simple moving average, but I am underweight the shares, wishing that I was still overweight. What can I do, if anything? I currently have inventory of about 2/3 of what would like to have. 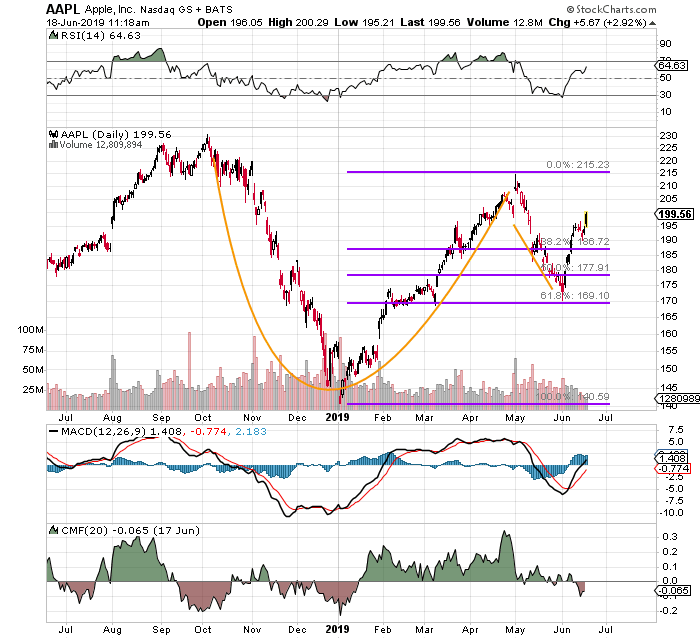 Incredibly, the cup-with-handle pattern that we thought ended with that false handle back in late March can actually be redrawn to include the present. The new "giant" handle is not only a whopping 21% deep, but also a nearly perfect 61.8% Fibonacci re-tracement of the Christmas-through-May 1 rally, further validating (I think) what I see.
What this means to me is that my $240 price target may still be good for something. What does Jim Cramer say? "Own it, don't trade it." I traded it. I still did better than if I had mowed the lawn or something, but turns out he was right. Again.

Target Price: $240 (re-established)
Peel Something Off: $215
Add: $186, $178
Panic: $170
Now: Sell Aug. 2 $185 puts (value: 2.92), and / or August 2 $177.50 puts (value 1.69)
Note: The firm reports in late July, hence the Aug. 2 expiration date. The aggregate credit here come to $4.61, which will serve to reduce net basis should an equity purchase be required due to a negative earnings surprise (or any other reason).
AAPL, GOOGL, DIS, GS, QCOM, MA and T are holdings in Jim Cramer's Action Alerts PLUS member club.
Get an email alert each time I write an article for Real Money. Click the "+Follow" next to my byline to this article.
TAGS: Investing | Stocks | Technical Analysis | Fintech | Health Care Equipment & Services | Technology | Technology Hardware & Equipment