By BRUCE KAMICH Aug 30, 2019 | 10:05 AM EDT
Stocks quotes in this article: AIG
American International Group Inc. ( AIG) has been testing the $52 level the past three months. Will it continue to hold or is the risk of a breakdown greater now? Let's check out the charts and indicators.
In the daily bar chart of AIG, below, we can see that prices made a low in December with the broader market. We can see a decent rally to a small double top in July and August. Prices have pulled back to below the cresting 50-day moving average line. The rising 200-day line intersects around $47.
The daily On-Balance-Volume (OBV) line shows a rise from December to late May confirming the price advance but the line has been mostly flat the past three months, which is a bearish divergence when compared to prices making new highs in July.
The movement of the Moving Average Convergence Divergence (MACD) oscillator also shows a divergence in July as it made a much lower high than in May. The MACD oscillator is now below the zero line for a sell signal.

In the weekly bar chart of AIG, below, we can see that the bigger picture over the past three years is weak and prices have only rallied into overhead resistance. AIG is above the rising 40-week moving average line but the OBV line is pointed down suggesting that sellers of AIG are now more aggressive.

The MACD is crossing to the downside for a take profits sell signal.

In this Point and Figure chart of AIG, below, we can see a nearby price target of $50.27 being projected. That is not much of a decline but if it happens it means that the support at $52 has been broken. 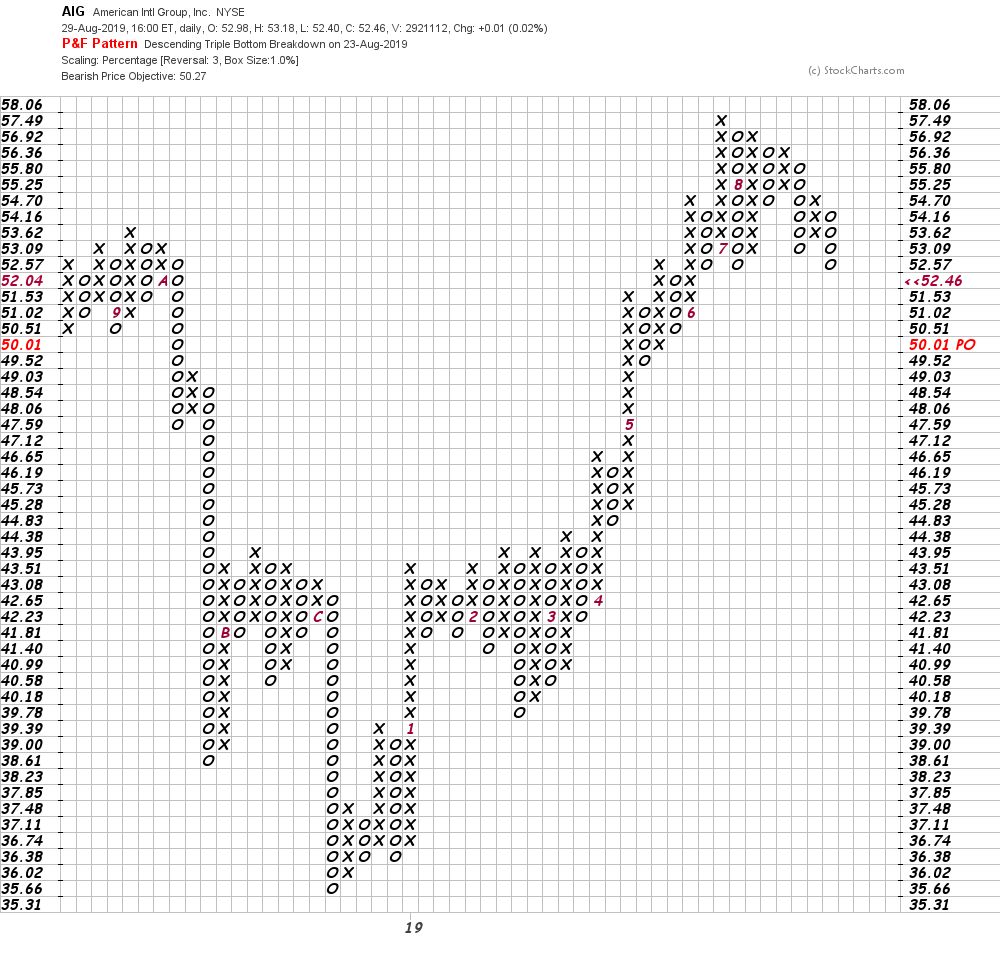 Bottom-line strategy: Insurance companies should be sensitive to the direction of interest rates and that might be driving the pullback in AIG. I suspect we will see lower interest rates in the weeks ahead and lower prices for AIG.
Get an email alert each time I write an article for Real Money. Click the "+Follow" next to my byline to this article.
TAGS: Fixed income | Interest Rates | Investing | Stocks | Technical Analysis | Financial Services