About three and half months ago, on March 31, I introduced Vision Marine Technologies (VMAR) as my favorite stock for the rest of 2022. While the stock is down slightly over that period, the maker of electric outdoor powertrain systems and electric boats finally issued a news release that deserves attention.

As a reminder, I was able to ride in a boat powered by VMAR's 180E electric outboard motor system while attending the Miami International Boat Show in mid-February. I've never been much of a boater, but I was blown away by the smooth acceleration and the fact that there was almost zero noise coming from VMAR's 180E engine. If you've ever tried to carry on a conversation while sitting toward the back of a boat traveling 30 or 40 mph, you know how difficult it can be. But it was effortless in the boat powered by the all-electric 180E powertrain.

On Monday, Vision Marine announced a partnership with Groupe Beneteau to integrate Vision Marine's electric outboard motors on several models across Groupe Beneteau's brand portfolio. Unless you're a boater, you've probably never heard of Groupe Beneteau, but this is a huge company with around 7,600 employees spread across France, the U.S., Poland, Italy, Portugal and China. With its international production capacities and global sales network, Groupe Beneteau oversees 12 brands and manufactures more than 180 different boat models. Oh, and it's worth noting that Groupe Beneteau sells thousands of boats across all its brands and models.

Neither company released any firm order numbers on Monday, so it's impossible to know how big of an impact this partnership will have on Vision Marine's bottom line. However, based on my conversations with VMAR's management in the past, it sounds like every 100 E-Motion 180-hp Powertrain Systems sold will add about $0.25 per share to the company's bottom line. Given the number of boats Groupe Beneteau sells each year and the size of its worldwide dealer network, I hope this partnership will turn out to be a significant catalyst for VMAR's business.

There is one statement from Vision Marine's news release that I want to highlight, and it comes from the company's CEO, Alex Mongeon:

"We have always held Groupe Beneteau in high esteem and acknowledge the company's longstanding mandate for leadership and excellence within the boating industry. We are honored to have the opportunity to power the Four Winns boat with our E-Motion 180E technology and look forward to a longstanding partnership with them. We continue to showcase our technology and rig the E-Motion powertrain on numerous third-party boats to formally move towards scaled production of our E-Motion technology for commercial usage." (emphasis my own)

I read Alex's words to mean that the folks at Beneteau aren't the only ones hanging around the Vision Marine facility. Based on the CEO's statement, my guess is that Monday's announcement from Groupe Beneteau is the first of many from Vision Marine over the next 12 months. 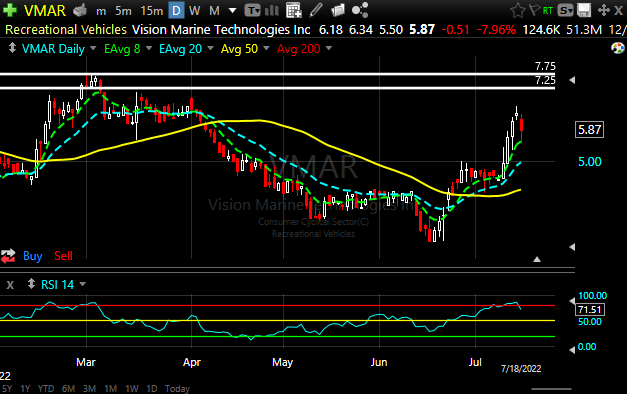 If you're trading VMAR, I think you have two options.

The first is to buy the shares on a dip toward the 10-day or 21-day exponential moving average (EMA), especially if the pullback occurs with the Relative Strength Index (RSI) pulling back to but remaining above 50. The second is to buy the stock on a break above resistance between $7.25 and $7.75. In both cases, keep an eye on the 50-day simple moving average (SMA) as the stock has respected that reference point reasonably well over the past year.

Get an email alert each time I write an article for Real Money. Click the "+Follow" next to my byline to this article.
TAGS: Fundamental Analysis | Investing | Stocks | Technical Analysis | Technology | Real Money | Consumer Discretionary | Electric Vehicles