Hansotia said there are two factors at work for Agco. The first is that crop prices are up, resulting in good profitability for farmers. The second is pent-up demand from the pandemic. In lean times, farmers hold off on new purchases and that's exactly what happened last year.

Hansotia said demand is growing for sustainable farming around the globe, even in China, where that country has seen several years of volatility from both a swine flu and then COVID-19.

Back on March 23 we checked out Agco and wrote that "The charts and indicators of AGCO are pointed up with $152 and then $172 as new price targets. AGCO could show independent price strength over the next few weeks but I would not rule out a sideways consolidation before renewed gains as weakness in the broader market could turn buyers less aggressive."

In this daily bar chart of AGCO, below, we can see that prices edged higher from late March into April. Check out the 12-day price momentum study in the lower panel, which shows that the pace of the advance slowed greatly and that foreshadowed the decline in May and June. Prices bottomed in June and July and there was a successful test of the rising 200-day moving average line.

Trading volume remained active and the On-Balance-Volume (OBV) was surprisingly steady in May and June and has since risen to a new high. The OBV line tells us that buyers of AGCO have remained more aggressive. The 12-day price momentum study shows us higher lows from May to July as prices recover on the upside.

In the weekly Japanese candlestick chart of AGCO, below, we can see that prices held the rising 40-week moving average line but the most recent candlestick bar shows an upper shadow as traders rejected the highs.

The weekly OBV line is steady and the MACD oscillator is pointed down in a take profits sell mode but it has started to narrow. A mixed picture overall.

In this daily Point and Figure chart of AGCO, below, we can see that the software is projecting a decline to the $113 area based on the pattern of X's and O's. 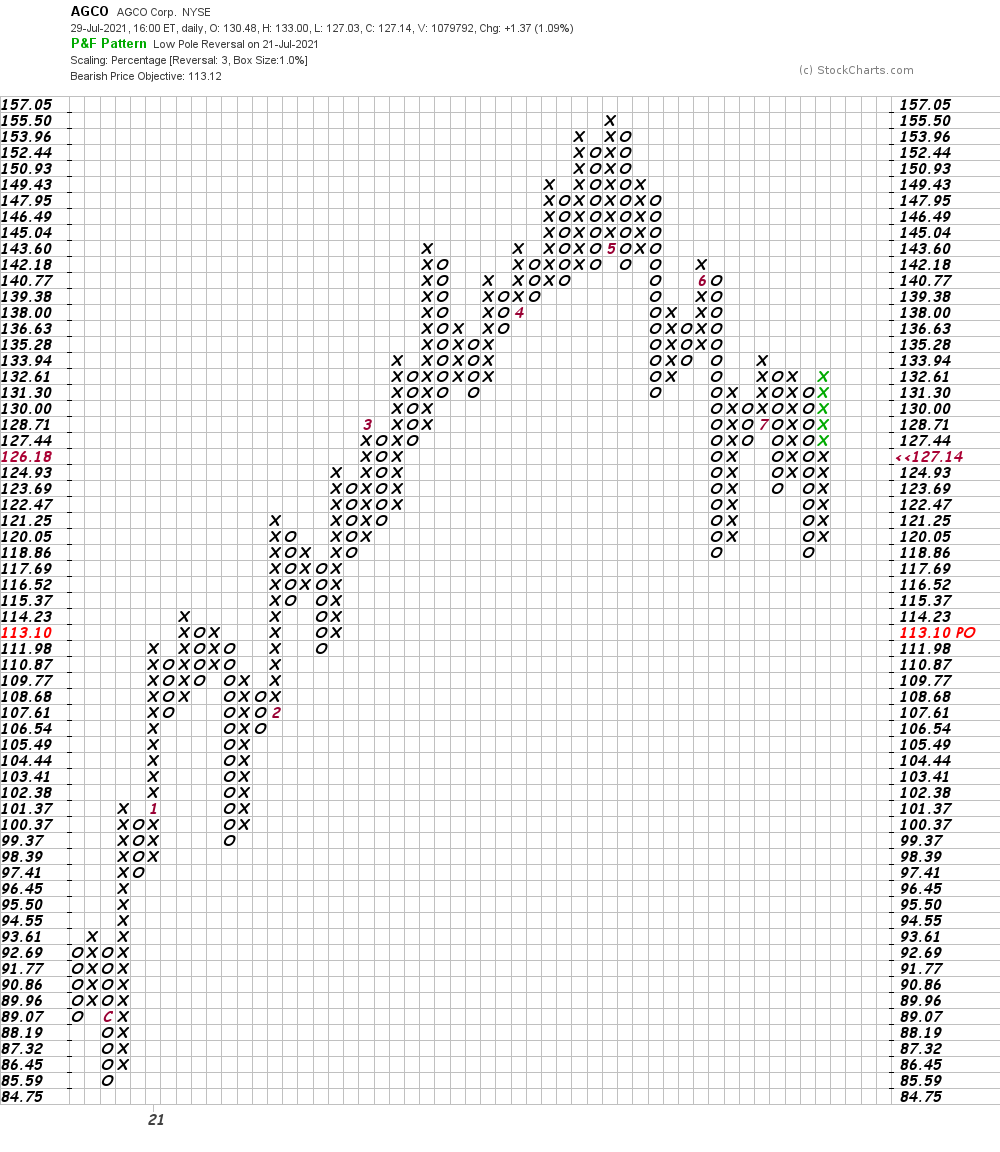 In this weekly Point and Figure chart of AGCO, below, the chart suggests a more bearish target of $95. A trade at $135.28 or higher could improve the picture.

Bottom-line strategy: AGCO has pulled back and has been making hopefully a new base in the $130-$120 area. The trend is still pointed down so AGCO is not "out of the woods" just yet. I want to wait a few more sessions to see if AGCO can build on its recent gains or slip back under $120. Stay tuned.

Get an email alert each time I write an article for Real Money. Click the "+Follow" next to my byline to this article.
TAGS: Earnings | Investing | Stocks | Technical Analysis | Agriculture | Mad Money | Executive Interview