Electric vehicles manufacturer Tesla (TSLA) was set to report on Wednesday afternoon. Tensions were high. Many traders really did not know what to expect. In the way of margin. In the way of some kind of outlook. So much had happened. From shutdowns to supply chains to "money furnaces"... would CEO Elon Musk even make an appearance.

Musk did just that. This is that story.

For the second quarter, Tesla posted an adjusted EPS of $2.27 (GAAP EPS: $1.95) on revenue of $16.93B. The bottom line results easily beat Wall Street. The top line, while good enough for year over year growth of 41.6%, met expectations. The adjustment of $0.32 per share was made for stock based compensation.

Net cash provided by operating activities increased 11% to $2.351B, as capex increased 15% to $1.73B. This allowed free cash flow to land at $621M. That might not seem like a big number coming after $2.775B and $2.228B for the last two quarters, but there was real concern that free cash flow might have fallen below $500M for the quarter and the print of $621M was reassuring.

The facility at Fremont, California operated at a record pace for the quarter. Output in Texas continues to grow. Shanghai has been the problem in 2022. The facility certainly has the highest capacity level in the Tesla universe, but was both partially and fully shut down at times due to the Chinese government's "Zero-Covid" related policies. Belin is up and running, having hit 1K vehicles in one week and continues to improve.

The firm still plans to grow its manufacturing capacity "as quickly as possible." The firm expects to achieve a 50% average annual growth rate in vehicle deliveries. That has not changed. The firm is sufficiently liquid enough to fund long-term capacity expansion and their expenses. The firm expects hardware related profitability to ultimately be accompanied by 'an acceleration" of software related profits.

The firm adds that the industrialization of the Cybertruck is planned for the Texas facility subsequent to the Model Y production ramp.

From the call... "Q2 was a unique quarter for Tesla due to a prolonged shutdown of our Shanghai factory. In spite of all these challenges, it was one of the strongest quarters in our history. As a result, we have the potential for a record-breaking second half of the year. I do want to emphasize this is obviously subject to force majeure, things out of our control."

How great is this? Tesla sold approximately 75% of the firm's holdings of Bitcoin during the second quarter, taking a $106M hit in the process, but adding $936M to the balance sheet. This was brilliant. Loading up on Bitcoin? Of course not. Turning most of it into cash, which strengthens the balance sheet and allows for a more liquid current situation as the Covid situation remains unstable, and as the world and maybe the US go into recession? Yes, brilliant.

Tesla ended the quarter with a net cash position of $18.915B, and inventories of $8.108B. Both of these lines were up and took current assets to $31.222B. Current liabilities came to $21.821B, which is down from three months ago. This improved Tesla's current ratio to 1.43 from 1.35 over three months and also improved the firm's quick ratio from 1.04 to 1.06. More than acceptable. Especially given the need to be inventory intensive in this business at this time.

Total assets increased to $68.513B, including just $437M in "goodwill" and other intangibles. Total liabilities less equity adds up to $30.855B, as long-term debt and finance leases dropped to $2.898B from $3.153B three months ago and from $7.871B one year ago. This balance sheet passes the Sarge test with ease and truly impresses the Sarge through the firm's overt attempt to improve this balance sheet made over the past year and ahead of the obvious onset of what could be considerably tougher economic times.

I can find 11 sell-side analysts who both opined on Tesla since these earnings were released and are rated at four or five stars by TipRanks. There are other, lesser ranked analysts that have opined, including one with a $73 target price, but I think we'll keep this portion of the article to those with more impressive track records.

I did not expect much. I did not come in with a position in Tesla, but I had the urge to short some ahead of the report. I did buy an odd-lot of that new AXS Tesla Bear Daily ETF (TSLQ) that seeks to achieve the inverse result of the daily performance of Tesla stock. Fortunately, I was experimenting with this product and did not put any real funds into it. It appears to work as designed.

I am very impressed with these results. I am impressed with production, revenues, what profitability was salvaged, free cash flow, the balance sheet.. you name it. This was a solid quarter from a firm that executed well under intense pressure. 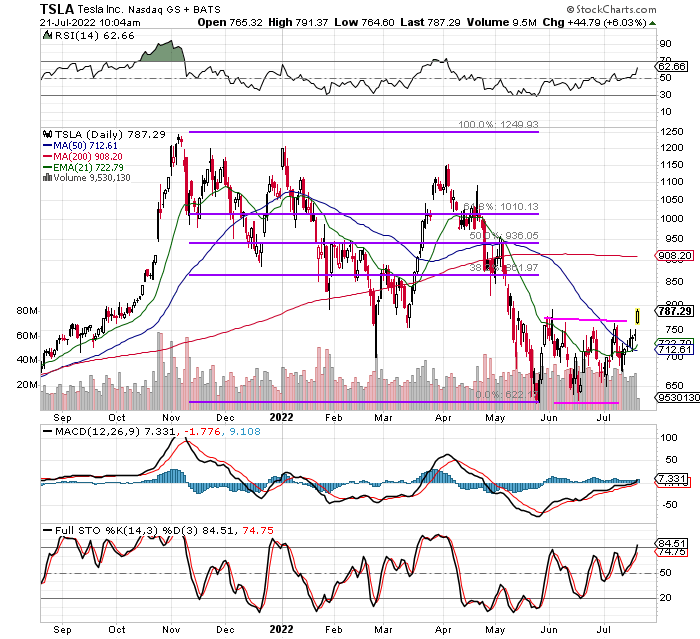 Readers will see TSLA breaking out of a basing period of consolidation this morning. If support can be found where there had been resistance ($765-ish), then TSLA might be coming out of where it has been.

Relative strength is good, but not technically overbought, the daily MACD is moving in the right direction. Only the 26 day EMA is still negative. The full stochastics oscillator shows growing strength as well.

My realistic target for this name would be $861, which would be a 38.2% retracement of the entire November through May selloff. Then, we can talk about the 200 day SMA, which is $908 and would be close to a 20% move from the top of that basing period now on the rear view mirror.

No, I would not join or add to a TSLA long on this morning's 6% move. Getting paid $5 for $765 puts expiring tomorrow though? That's interesting. Are you willing to own TSLA at a net basis of $760 if tomorrow somehow goes poorly? That is the question.

Get an email alert each time I write an article for Real Money. Click the "+Follow" next to my byline to this article.
TAGS: Bitcoin | Earnings | Economy | Investing | Stocks | Technical Analysis | Trading | Automotive | Elon Musk | Electric Vehicles