Athletic apparel and footwear giant Nike (NKE) reported its fiscal first-quarter performance on Thursday night. There was a lot of "good" to look at. But there was also some trouble in the supply chain that is expected to persist, impacting several quarters. The stock sold off overnight and into early trading Friday.

For the three-month period, Nike posted GAAP EPS of $1.16, which did beat Wall Street expectations. Revenue generation landed at $12.25 billion, good for annual growth of 15.6%, but below estimates.

Gross margin widened 170 basis points from a year earlier, and 70 basis points sequentially to 46.5% leading to the improved profitability. This increased margin performance was largely due to Nike Direct, where sales contributed $4.7 billion to the $12.25 billion total, which is growth of 28% (25% in constant currency). Nike Brand revenue increased 12% to $11.6 billion, while the Converse brand pitched in $629 million, growth of 7%.

The problem, more than the first-quarter revenue miss, was in the guidance.

For their current fiscal (second) quarter, Nike expects revenue growth to be flat to down low-single digits (in percentage terms) due to factory closures in Asia, most lately, and notably in Vietnam. Nike expects both holiday and spring season sales to be negatively impacted. CFO Matthew Friend stated "Consumer demand for Nike remains at an all-time high and we are confident that our deep consumer connections and brand momentum will continue."

Friend also said "Lost weeks of production combined with longer transit times will lead to short-term inventory shortages in the marketplace for the next few quarters." The company expects full fiscal year 2022 sales to rise at a mid-single-digit pace, down from prior guidance of double-digit growth. Uh oh.

The fact is that Nike's operations in both Vietnam and Indonesia have been shuttered at times due to the spread of the Delta variant of Covid-19. Indonesia seems to be up and running, but production in Vietnam is basically still shut down. Nike manufactures roughly half of its footwear and about a third of all apparel in Vietnam.

The Not So Ugly

Turning to the balance sheet... cash and short-term investment, in aggregate, are up 44.5% to $13.7 billion over the past 12 months, up $200 million over the three months ending Aug. 31, despite the company having returned $1.2 billion to shareholders through dividend payments and share repurchases.

Inventories are up slightly from a year earlier. At least Nike started the quarter with something to sell. Total assets are up 14% year over year to just under $38 billion. Total assets amount to about 160% of total liabilities less equity. Long-term debt accounts for about $9.4 billion worth of the liability side of the balance, which is flat from last year.

All in all, the balance sheet is in good and improved shape.

I see six five-star-rated analysts that have opined on Nike in response to these earnings. Five either reiterated or maintained "buy" ratings or their firm's equivalent. One reiterated a "hold" rating.

The average price target of the six is now $180.16 with a high of $200 (Randal Konik of Jefferies), and twin lows of $170 (Paul Lejuez of Citigroup and Simeon Siegel of BMO Capital. Lejuez is the "hold.") 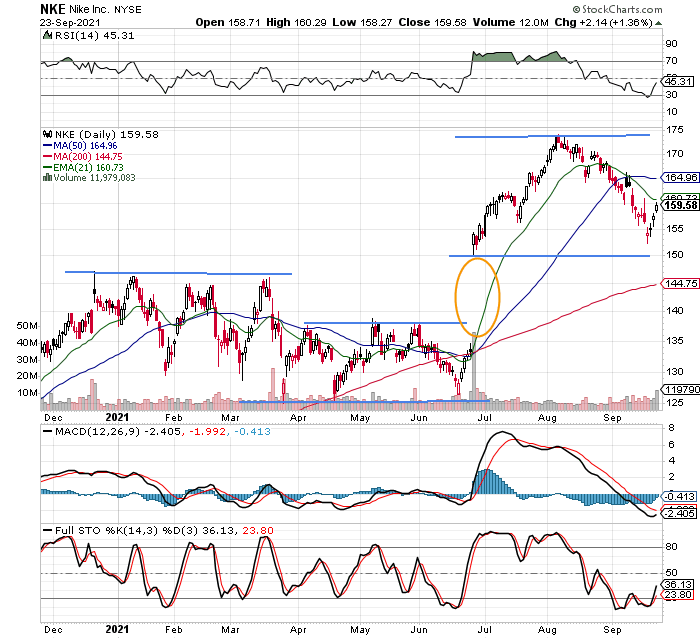 Readers will see that in between the basing pattern that ended in late June (last earnings report) and the one that began the next day, there was a $15 gap created that remains unfilled. The shares have been flirting with $150 support Friday morning, and seem to be trading there as the opening bell finished ringing.

What I am telling you is that I think that if $150 fails that the shares could fall as far as $135. December $135 puts are still paying about $2.35 Friday morning for those so inclined to take on discounted equity risk and get paid for the exposure.

Get an email alert each time I write an article for Real Money. Click the "+Follow" next to my byline to this article.
TAGS: Earnings | Investing | Markets | Stocks | Trading | U.S. Equity