Tuesday morning the company reported earnings of $2.11 per share on revenue of $5.4 billion. The EPS number came in a dime short of expectations while revenue landed a rounding error below Wall Street estimates.

Although I've seen talk about how McDonald's never misses, last quarter its EPS result only met expectations while first-quarter's actually missed by four cents. We're living in the rosy retrospection of the five EPS beats in a row dating back to fourth-quarter 2017.

Comp sales are a major focus when examining McDonald's. U.S. comps of 4.8% missed expectations of 5.2% and came in well below second-quarter comp growth of 5.7%. Overall, comp sales of 5.9% exceeded expectations, but also came in short of last quarter. That shouldn't be a shock given the U.S. disappointed, but international growth, paced by France and the United Kingdom, remains strong.

The bottom-line shortfall appears to be a short-term pain exchange for potential long-term gain. Approximately 14,000 stores received improvements and updating. Digital ordering kiosks, mobile ordering, and pay/pick up services were added. Unfortunately, reliable and functioning ice cream machines were not part of the plan. McDonald's aggressively expanded their delivery services as well through partnerships with GrubHub GRUB, DoorDash, and Uber's UBER Uber Eats.

McDonald's is trying to reward patient investors as well. The company returned $2.4 billion via buybacks and dividends in the third quarter. Combined, this works out to a 6% annualized return with 2.5% of that coming in the form of a dividend. Over the past three years, the company has returned $22.5 billion cumulatively to investors. This may help keep a small floor under the shares, but, and there's always a "but," history is not on the bulls' side.

While McDonald's hasn't been a huge post-earnings mover, one thing has been consistent: it moves in the same direction as the first day's post-earnings close most of the time. In fact, seven of the past eight reports have experienced a continuation of the first-day move. Combine that with some bearish price action along with bearish secondary indicators and there is a reason to pause before buying any dip. 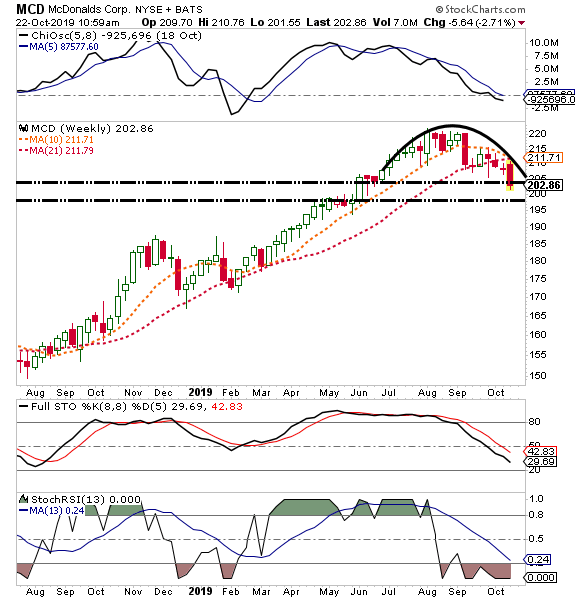 On the weekly chart, McDonald's has this dome above price. The stock is breaking below support Tuesday and appears headed to $197.50 minimally. There is a range, call it $5, between $192.50 and $197.50 from late spring that should act as support, but if it fails I wouldn't look to buy McDonald's until it reached $185.

If I were a follower in secondary indicators offering divergences, then watch for a bullish crossover in the Full Stochastics indicator as a possible signal for a turn in price. It's worked well the past two triggers since last summer.

In short, there doesn't seem to be a reason to run into the long side of McDonald's. I actually favor a put spread like the November 15, $205 - $197.50, but I wouldn't outright short shares since I want limited risk in this market.

Get an email alert each time I write an article for Real Money. Click the "+Follow" next to my byline to this article.
TAGS: Earnings | Investing | Put Call | Stocks | Technical Analysis | Trading | Stock of the Day