In his final "Executive Decision" segment of Mad Money Wednesday night, Jim Cramer sat down with Steve Streit, founder and CEO of Green Dot Inc. (GDOT) , and Brandon Kreig, CEO of the privately held Stash, which has a partnership with Green Dot.

Kreig explained that Stash is a service that allows people to buy fractional shares of stock at companies they buy from. The service is totally automatic and hopes to make investing a regular occurrence for everyone. Streit added that Green Dot is a bank, but also a tech firm that offers banking as a service to other companies with great ideas. Using their software, other companies and services can create their own customized bank accounts with perks and rewards that are limited only by their own creativity.

In a world where many companies refuse to split their stock to lower the share price, many individual investors are being left out in the cold. Kreig said 80% of Americans live paycheck to paycheck, which means only services that offer fractional shares are even feasible for most people.

Let's check out the charts of GDOT.

In the daily bar chart of GDOT, below, we can see a "neckline" of a large rounded top formation dating back to May of last year. Prices have bounced off the $70 level several times the past ten months, and in February the $70 level was finally broken on the downside. The $70 area is likely to become a resistance zone going forward.

The popular moving averages, like the 200-day moving average line, acted as support for GDOT in October, November, part of December, and January, but since the end of January it has acted as resistance.

In early February we can see a bearish death cross of the 50-day line and the 200-day line. Trading volume for GDOT is on the light side, but the daily On-Balance-Volume (OBV) line is revealing, as it shows aggressive buying until the middle of January and then very aggressive selling.

The Moving Average Convergence Divergence (MACD) oscillator has been largely bearish since October and a new base needs to develop to turn this indicator bullish.

In the weekly bar chart of GDOT, below, we can see a beautiful rally from 2016.

Prices based in the $20-$25 area before a significant mark up phase. The rising 40-week moving average line has been able to capture nearly all of the rally. Not bad results for such a simple tool.

Currently, GDOT is trading below the declining 40-week line. The weekly OBV line is pointed down and tells us that sellers of GDOT have been more aggressive for about three months.

The weekly MACD oscillator is below the zero line in sell territory.

In this Point and Figure chart of GDOT, below, we can see a modest downside price target of $53 being projected. The problem with GDOT declining to $53 is that it will be a new low for the move down and would break support and open the way towards the $40 area. 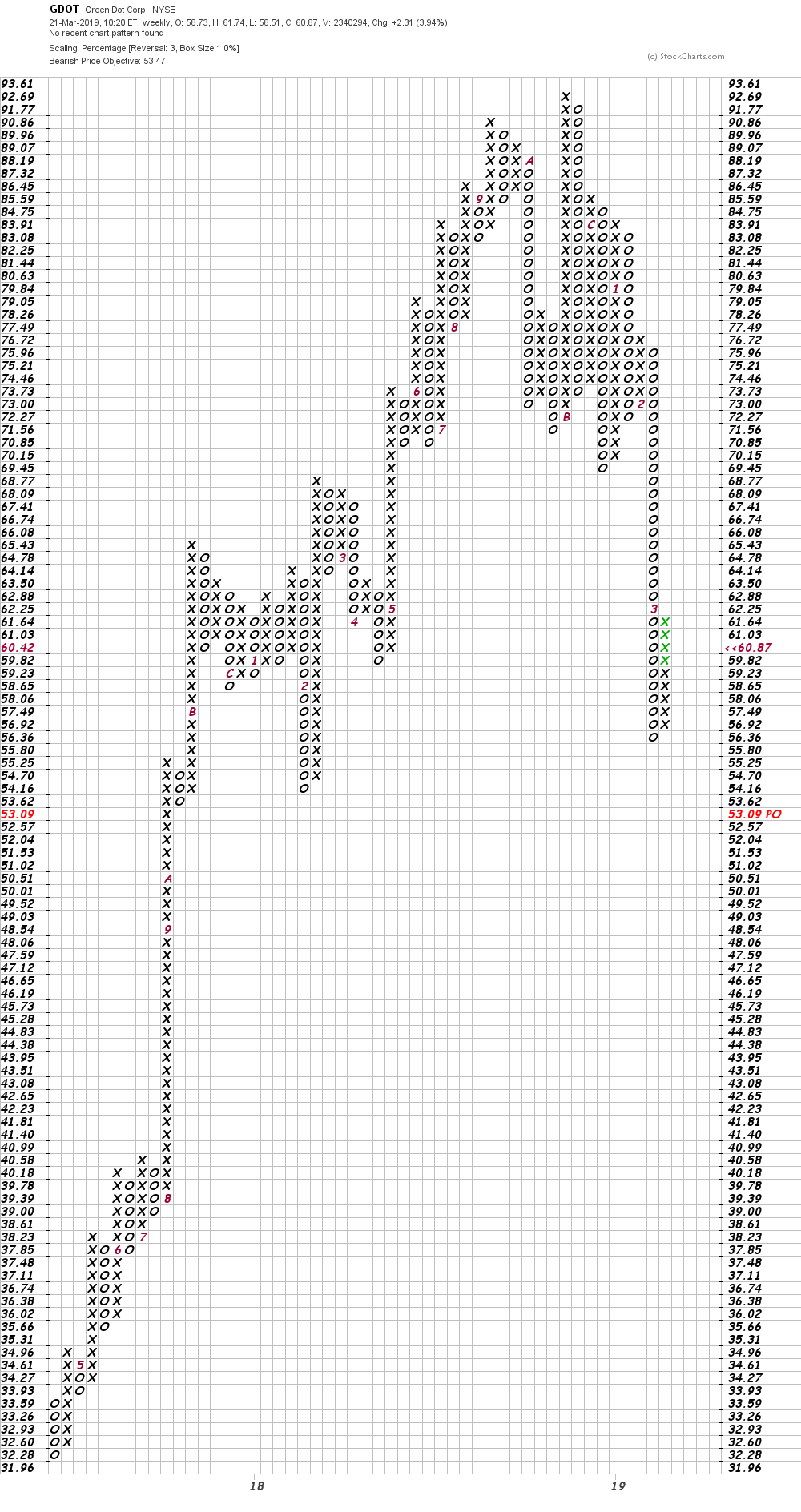 Bottom-line strategy: GDOT could bounce to the upside in the short-run, but the bigger risk on the charts is that prices could decline to the $40 area in the months ahead.

Get an email alert each time I write an article for Real Money. Click the "+Follow" next to my byline to this article.
TAGS: Investing | Stocks | Technical Analysis | Banking | Mad Money | Executive Interview | Brokerages