Affirm Holdings Inc. (AFRM)  provides payment platforms for digital and mobile commerce and is scheduled to report its fiscal second-quarter results after the close of trading Thursday.

In our Jan. 12 review of Affirm we wrote, "AFRM could make an oversold bounce of $10 to $20, but the trend is down and a new base pattern has not formed. I try to find trends that are worth buying and not bounces in downtrends. I would pass on purchases of AFRM at this point in time."
Let's have another look at Affirm's charts.
In this updated daily bar chart of AFRM, below, we can see that prices made a low in January. AFRM has bounced slightly but remains well below the 50-day and 200-day moving average lines. The slope of the 50-day average is negative and it is crossing below the 200-day line now for a bearish dead or death cross sell signal. Obviously, this sell signal comes very late. The trading volume increased in January and could mean we saw a change of ownership from weak hands to stronger hands. The On-Balance-Volume (OBV) line shows some improvement from late January. The 12-day price momentum study shows a higher low from December to January for a bullish divergence.

In this weekly Japanese candlestick chart of AFRM, below, we have an interesting pattern, or should I say patterns. One interpretation of this chart would be to suggest that prices made a possible hammer formation in the middle of January. Maybe. I would note that the lower shadow is not two to three times the size of the real body and really doesn't conform to the correct view of the pattern. Another pattern that might be playing out is a falling three methods. This pattern is found in a downtrend and is a temporary counter-trend rally. The pattern shown below is not picture perfect but it could work in the end. Meanwhile, the western technicals show that prices are below the 40-week moving average line and the weekly OBV shows a lift. The Moving Average Convergence Divergence (MACD) oscillator has begun to narrow.

In this daily Point and Figure chart of AFRM, below, we can see a potential upside price target of $103.

In this weekly Point and Figure chart of AFRM, below, we see the bears have control of the X's and O's and a bearish price target of just $9 is projected. 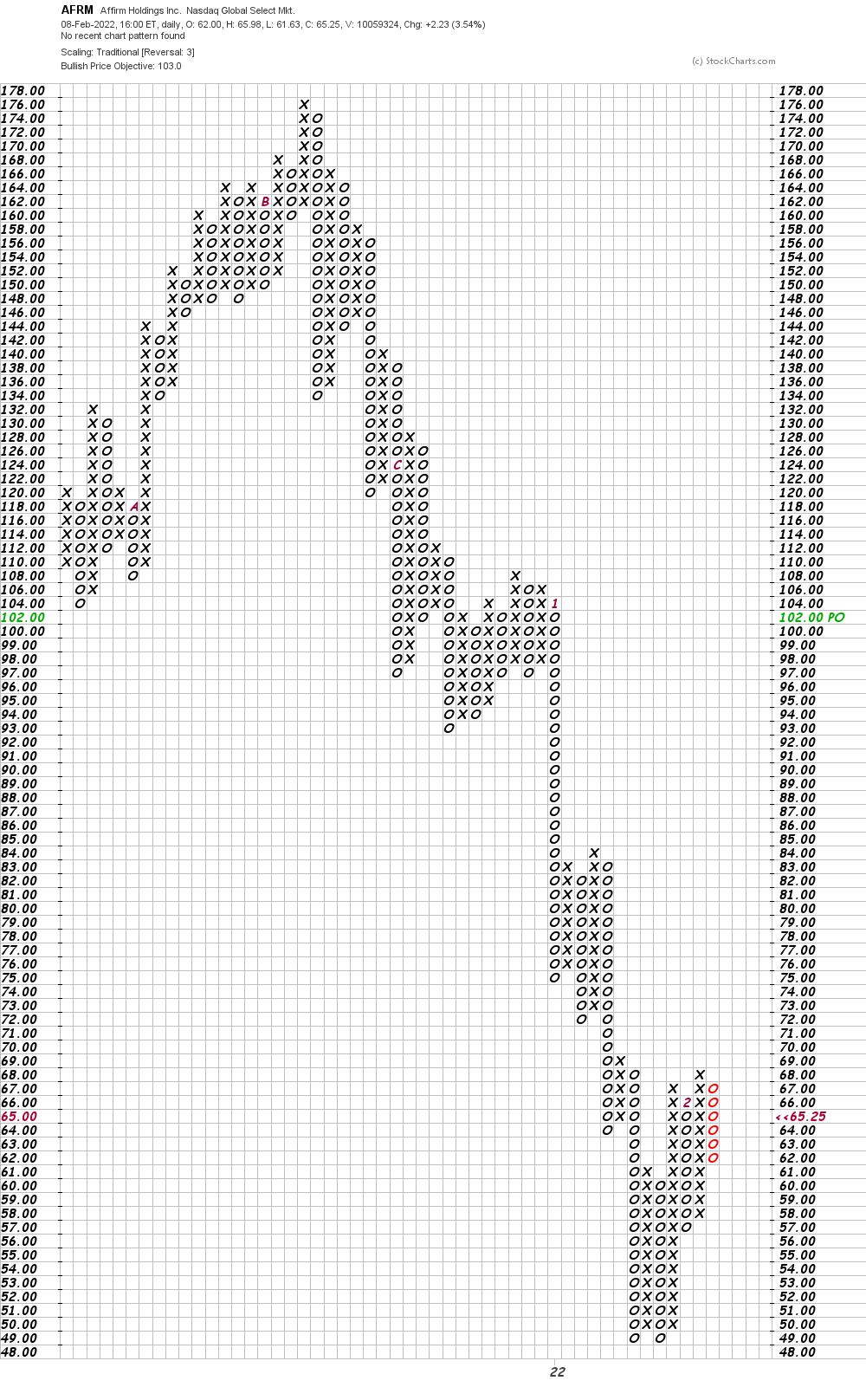 Bottom line strategy: I have no special knowledge of what AFRM is going to report for earnings on Thursday but I have a strategy for nimble traders. In the short run I believe AFRM can rally to the $80 area. The daily Point and Figure chart suggests a rally to $103 but that may be ambitious. Without a strong base pattern in place I cannot rule out renewed weakness later in the year, but a price target of $9 seems too bearish at this point in time.
Get an email alert each time I write an article for Real Money. Click the "+Follow" next to my byline to this article.
TAGS: Investing | Stocks | Technical Analysis | Fintech | E-Commerce | Real Money | Earnings Preview