Su said it was a very exciting day for AMD, as its third-generation chips have double the performance of the company's closest rival. She was also excited for the company's pending Xilinx (XLNX)  acquisition, which is expected to close later this year.

Finally, when asked whether the semiconductor shortage is good or bad for AMD, Su said it is seeing enormous demand for all its processors, which is very good for the company, which is a holding of Cramer's Action Alerts PLUS charitable trust.

The last time we looked at AMD was back on Feb. 25. We wrote at that time, "While AMD may rally to new heights later in 2021 it is the near-term price action that troubles me. I need to see signs of more aggressive buying and stronger indicators before recommending purchases."

Let's check and see if the charts and indicators have improved.

In this updated daily bar chart of AMD, below, we can see that prices worked lower from our Feb. 25 review. We can see that AMD tested the rising 200-day moving average line and is now back above it. It remains below the declining 50-day line, however. The On-Balance-Volume (OBV) line is still in a downtrend but looks stable so far in March. Maybe we will see a return of more aggressive buying. The Moving Average Convergence Divergence (MACD) oscillator is still below the zero line, but we could see a cover shorts buy signal in the near term.

In this weekly Japanese candlestick chart of AMD, below, we see a mixed picture. Prices tested the rising 40-week moving average line and are currently above it. Recent lower shadows suggest that traders are so far rejecting the lows. Trading volume has been shrinking since August and did not increase on the test of the 40-week line, suggesting that technically oriented traders did not see it as a buying opportunity. The On-Balance-Volume (OBV) line has been stalled since August and the MACD oscillator is still pointed down toward the zero line.

In this daily Point and Figure chart of AMD, below, we can see a potential downside price target in the $70 area. A rally to $87.32 would likely improve the picture. 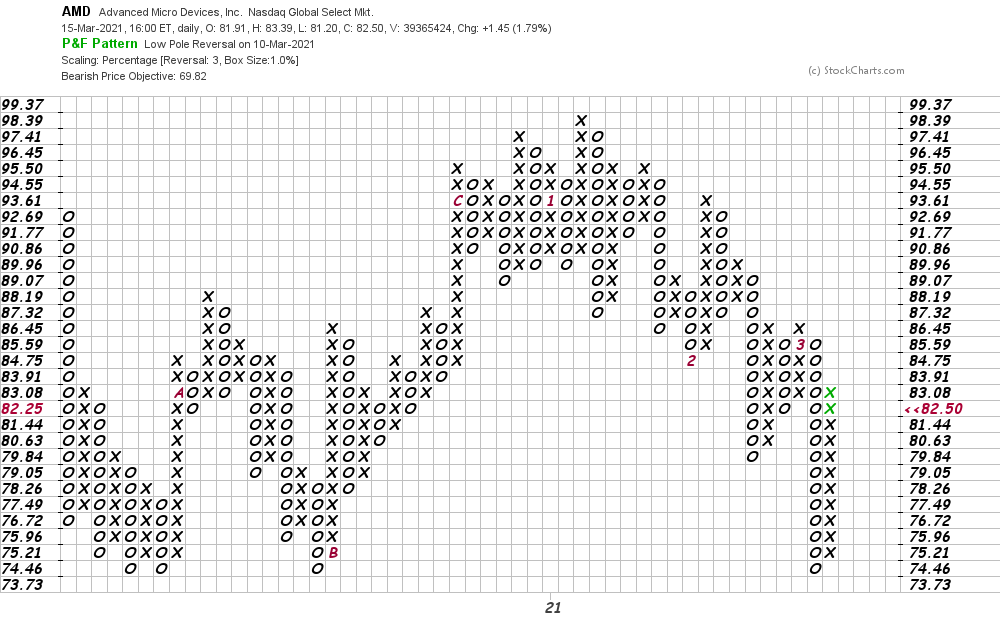 In this weekly close-only Point and Figure chart of AMD, below, we see that the software is projecting the $65 area as a possible downside price objective.

Bottom line strategy: It sounds like AMD has a positive fundamental story, but right now the charts and indicators suggest that further price weakness is possible. Longer term in the second half of 2021 AMD is probably trading at new highs, but in the short to intermediate term we could see further price weakness.

(AMD is a holding in Jim Cramer's Action Alerts PLUS member club. Want to be alerted before Jim Cramer buys or sells these stocks? Learn more now.)

Get an email alert each time I write an article for Real Money. Click the "+Follow" next to my byline to this article.
TAGS: Fundamental Analysis | Investing | Stocks | Technical Analysis | Semiconductors & Semiconductor Equipment | Technology | Mad Money | Executive Interview | Real Money

I'm Hot on the Economy, Not on Treasury Rates

The economy right now appears stronger than it was 2018, and therefore should soon push yields higher than what persisted back then. Here's my case.

Traders are looking hard and trying to find stocks that have been mistreated recently without any real justification.