Rodriguez said despite seeing a lot of fear and uncertainty in December, ADP continues to see steady growth in both employment and wages. The economy still has a lot of momentum, he said, even with the recent government shutdown.

Rodriguez was most excited about ADP's human capital management offerings. The company can provide complete human resource outsourcing as well as handle benefits, retirement plans and compliance issues. For smaller companies competing for talent, these services are crucial.

Cramer said the best way to play our growing economy continues to be with ADP. OK, that sounds like a strong fundamental story, but what about the charts? Let's check.

In this daily bar chart of ADP, below, we can see that prices corrected to the downside in the fourth quarter of 2018. From a late December nadir the share price of ADP has firmed back above the declining 50-day moving average line and above the rising 200-day line. The 50-day line recently closed below the the 200-day line for a very belated bearish death cross. The level of volume has been higher from November, suggesting that sellers and buyers have been more active. The daily On-Balance-Volume (OBV) line declined in November and December but has been firming this year, telling us that buyers are acting more aggressively again. The Moving Average Convergence Divergence (MACD) oscillator has just crossed the zero line for an outright go-long signal.

In this Point and Figure chart of ADP, below, we can see a bullish upside price target of $170 projected. 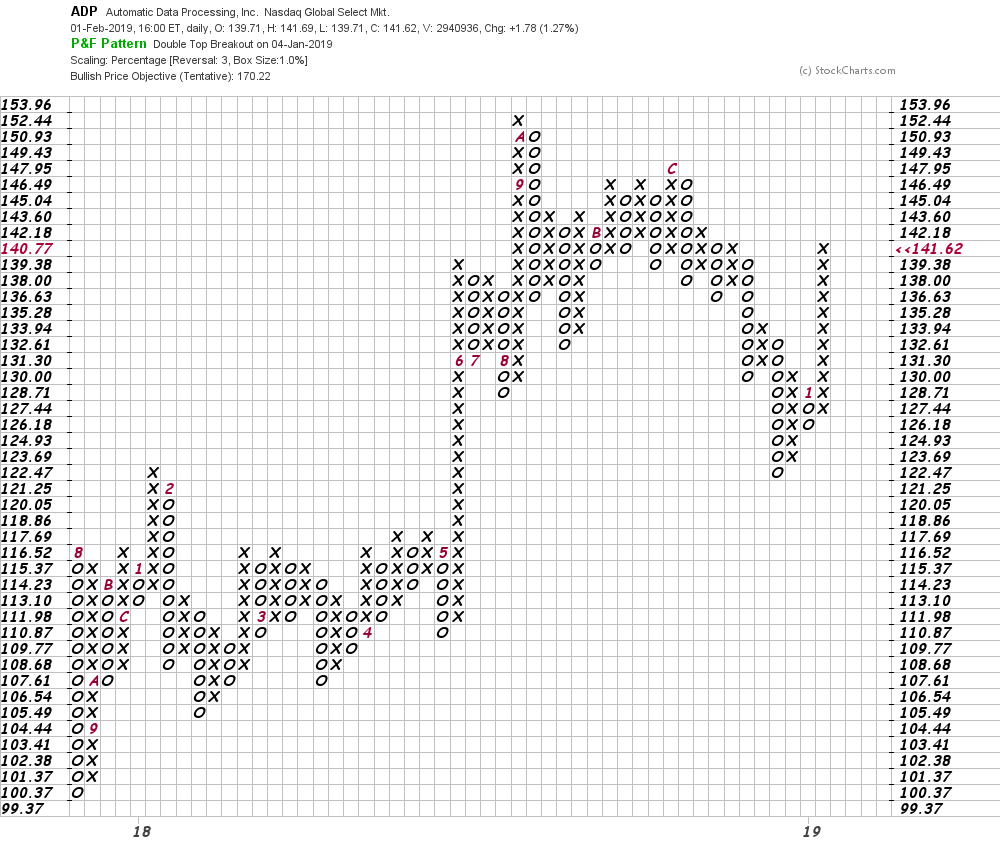 Bottom line strategy: ADP is pushing up into overhead resistance from late last year. Prices could stall a bit in the near term, but the charts favor a move to new highs. Approach ADP from the long side around $140, risking below $133. My upside price targets are $150 and $170.

Get an email alert each time I write an article for Real Money. Click the "+Follow" next to my byline to this article.
TAGS: Investing | Stocks | Technical Analysis | Software & Services | Real Money

I expect GRPN will disclose more about its stake in privately held SumUp.

Here's my strategy for the stock.