Earlier today we covered Jim Cramer's "Rule of 40" method, which says that a company's revenue growth plus its profit margin must be greater than 40. Anything less is worrisome. We discussed Twilio Inc. (TWLO) , and now we want to look at Adobe Systems Inc. (ADBE) which also made Cramer's shortlist.

In the daily bar chart of ADBE, below, we can see that prices made a November-December low and retest before a rally to a July zenith. Over the last six weeks ADBE has closed below the 50-day moving average line and its slope has turned negative. Prices have pushed down into the $280-$270 support area (former resistance in May and June) but further weakness to test the rising 200-day moving average line is possible.

The daily On-Balance-Volume (OBV) line topped in July and its decline is telling us that sellers of ADBE have been more aggressive. The Moving Average Convergence Divergence (MACD) oscillator is below the zero line in sell territory and we might see a cover shorts buy signal if prices firm.

In this weekly bar chart of ADBE, below, we can see that prices are up around three-fold and above the rising 40-week moving average line.

The weekly OBV line has been flat the past three to four months suggesting that we are seeing a balance between aggressive buying and selling. The MACD oscillator crossed to the downside in early August for a take profits sell signal.

In this Point and Figure chart of ADBE, below, we can see a potential downside price target of $240-$239. A trade at $293.97 is probably needed to improve this chart. 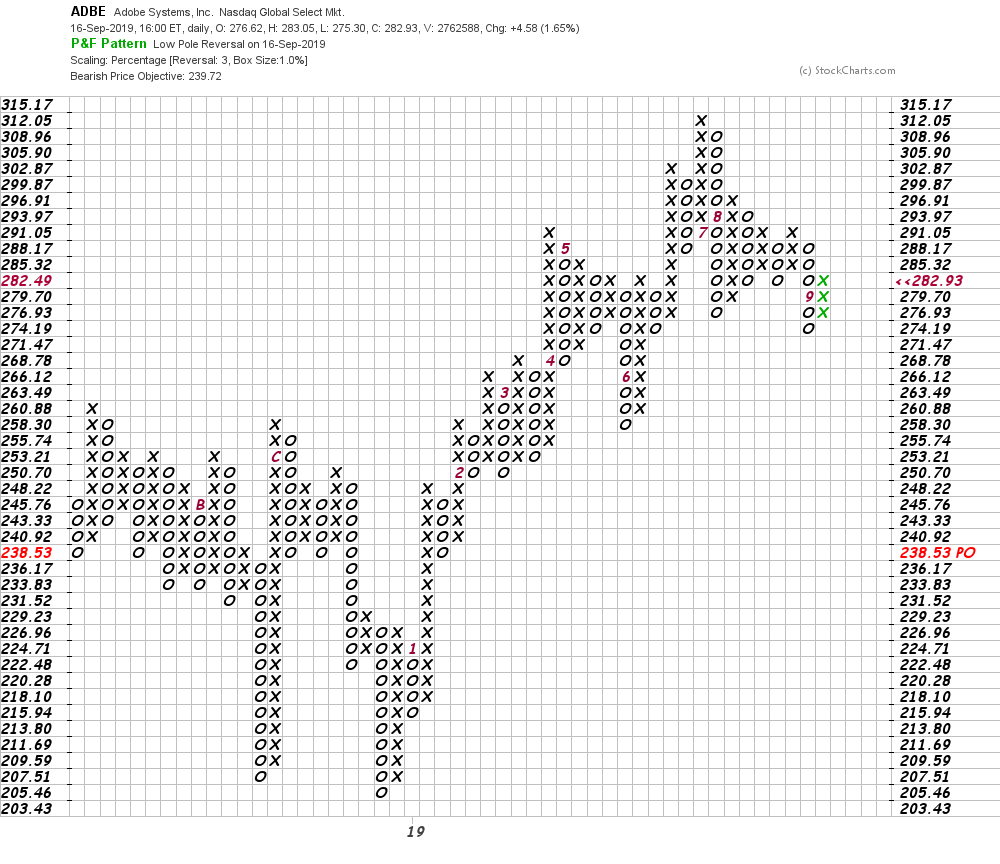 Bottom-line strategy: The charts and indicators of ADBE are tilted to the downside at this juncture but a bounce could change the picture quickly. Stand aside for now but remain flexible about new commitments.

Get an email alert each time I write an article for Real Money. Click the "+Follow" next to my byline to this article.
TAGS: Investing | Stocks | Technical Analysis | Software & Services | Technology | Technology Hardware & Equipment | Mad Money