Adobe (ADBE) is cementing status as a "cloud king" on Wednesday, with recent purchases and partnerships helping it carry that lofty title.

The company's earnings release, while somewhat mixed for those nitpicking the guidance, sent shares nearly 5% upward on Wednesday morning, helping the stock mark an over-25% gain year-to-date.

"This is the golden age of creativity, and our vision for Creative Cloud is to be the creativity platform for all," CEO Shantanu Narayen told analysts on Tuesday evening. "Whether you are a student, an experience designer, a YouTuber, or a marketer, storytelling is central to the way you communicate and connect."

The creativity is only growing at this point as the company carries sway across industries and finds ways to integrate tangential companies to create one of the most formidable cloud umbrellas in the market.

"Through organic means, as well as acquisitions, we expect ADBE to continue to expand its product tentacles through marketing, creative, and document management solutions for years to come with B2B the next step on the frontier," Wedbush analyst Dan Ives said on Wednesday morning.

One of the key factors fomenting the market's bullishness on the name is its ubiquity across industries for cloud integration.

Foremost among the partnerships that have made the company more attractive is the one with Microsoft (MSFT) .

The San Jose-based software company partnered with Microsoft in March to bolster its sales and marketing activities, bringing it into direct competition with companies like Salesforce.com  (CRM) , the perennial leader in subscription cloud management, and made revenue streams more reliable. 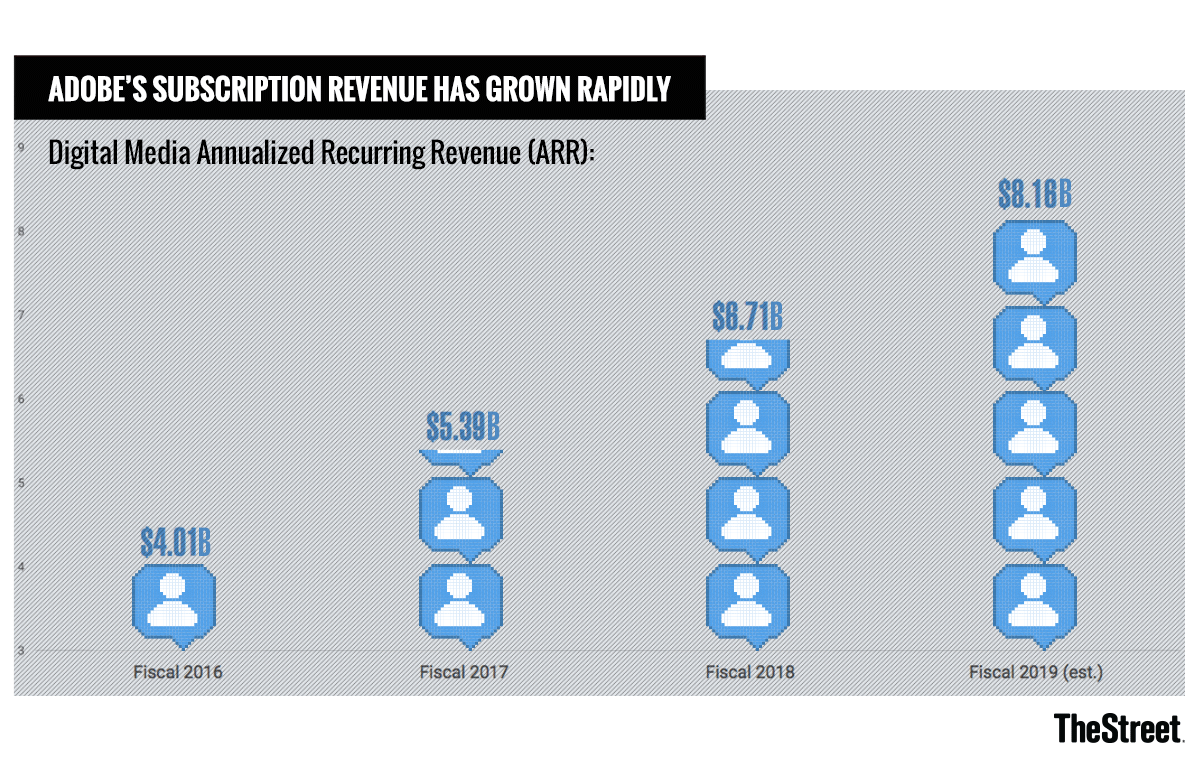 "The depth and breadth of our enterprise partner ecosystem remains a competitive advantage contributing to pipeline generation, customer success as well as financial performance," Narayen said. "We had another successful quarter of selling alongside Microsoft, where our combined value proposition is resonating with enterprise customers."

The ecosystem was headlined by numerous high-profile companies in addition to Microsoft that has made the company a key leader in the enterprise software space for eCommerce as well.

Aided by recent acquisitions, the buy in from numerous customers is only expected to pick up from this point, even beyond the eCommerce vertical.

"This quarter, we announced our partnership with LinkedIn, empowering B2B marketers and sellers to easily identify, understand and engage B2B customer buying teams," he added. "Some of the world's leading brands are already using Adobe Experience Platform in beta, including Best Buy (BBY) , Sony (SNE) , The Home Depot (HD) and Verizon Wireless (VZ) ."

New partnerships with ServiceNow (NOW) and Software AG (SWDAF) are expected to add integration and interest among potential users even further, especially as the company remains compliant with strict European data principles.

The mention of mergers and acquisitions in carrying consumer interest is a key buying thesis as well, highlighted by the recent billion-dollar buyouts of Marketo and Magento that are proving accretive.

"Both of them are actually big-picture going really well," Narayen said. "We announced some good partnerships there as well as it relates to what we are doing with Amazon to allow multiple small and medium businesses to be able to deliver their storefronts based on this combined technology."

He said the broader offerings under the combined umbrella and fostered under a partnership with high profile partners should continue to attract customers.

"Product integration with Magento is going well," Narayen added. "I think on the go-to-market efforts, the enterprise motion that we have is clearly a strength of Adobe... We've also done a good job, I think, of integrating the mid-market, small and medium business with Magento and Marketo because the combination of both of them give us a little bit more heft in the marketplace."

On a financial focus, many analysts were encouraged not only by the buy-in from big customers, but from the solid margins that suggest integration of the companies is going according to plan.

"We believe margin expansion will continue throughout 2H19, and in particular 4Q19, as Adobe integrates Magento and Marketo deals and benefits from leverage," BMO Capital Markets analyst Ketih Bachman explained. "We retain our Outperform rating and are raising our target price to $315, driven by demonstrated durable growth this quarter."

The durable growth shows that the company can indeed avoid the hiccups that befall many companies as they attempt to fold in pricey purchases of fellow software companies.

"The company beat on operating margin, a good data point suggesting that management is effectively integrating the operations of Marketo and Magento, and supports the EPS power story," Oppenheimer analyst Brian Schwartz wrote in a note to clients.

The acceleration of Digital Experience growth with Marketo and the popularity of Magento with major partners that can avoid the commonly found drag on margins and profits is a key catalyst.

To be sure, the size of its recent acquisitions could push a significant catalyst further toward the back half of the year, despite the strength of the subsidiaries so far. Many analysts pointed out that this may in fact be the reason for the conservative guidance that came in below estimates.

"On balance, guidance implies the resumption of operating margin growth is not expected until after the company anniversaries the Marketo deal in F4Q," Schwartz cautioned. "This development pushes out a good stock catalyst for a couple of quarters as margin growth will spotlight management's ability to achieve the revenue and operational synergies in large company acquisitions."

However, on a more bullish note, other analysts were inclined to believe the conservative guidance is the sign of more buying ahead.

"Thinking about Adobe's prospective growth rate, we expect a portion of it will come from M&A," Cannacord Genuity analysts Richard Davis said. "Adobe has made about 50 acquisitions in 30 years, but unlike some companies we track, it has not let itself get hypnotized by M&A bankers into paying ridiculous prices for companies that are more aspirational than substantial."

As such, he believes the company is setting aside shorter-term growth to prospect solid businesses it can scoop up at sustainable prices and incur less-damaging dilution.

"The company obviously doesn't tell us what they're planning, but we keep thinking that there are some nice niche BI firms that could bolster Omniture, or perhaps a deeper move into Customer Experience, whether that is social or content oriented," Davis concluded.

It is worth noting that the company has made significant capital expenditures into share repurchases, picking up 2.5 million shares in the second quarter, possibly tempering its ability to leverage a big buyout. The company also has over $6.5 billion left on its repurchase authorization, potentially lending the opportunity to spend more on shares rather than a new subsidiary in coming months.

Still, if history serves as a precedent, it might not be long before Adobe extends its reach yet again. Again, history will show, it's likely to be successful.

Get an email alert each time I write an article for Real Money. Click the "+Follow" next to my byline to this article.
TAGS: Mergers and Acquisitions | Investing | Markets | Stocks | Resorts and Hotels | Retail | Software & Services | Technology | E-Commerce | Stock of the Day