There are several names that we refer to as the "cloud kings." It is difficult to argue against the adaptability of a Salesforce.com ( CRM) or the consistent performance of a ServiceNow ( NOW) . Investment professionals have certainly taken notice. Every quarter, the number of funds that have taken some kind of stake in these companies only seems to go higher, often significantly so. For Wednesday at least, the King of the Cloud is going to be Adobe ( ADBE) by virtue of the firm's fiscal second quarter performance, and by performance, I mean performance where it counts.

For the second quarter, Adobe reported earnings per share of $1.83 on revenue of $2.74 billion. Both lines beating expectations, while those sales were good enough for year-over-year growth of 24.5%. The Digital Media segment was especially productive, contributing $1.89 billion worth of that revenue, or roughly 69% of the entire pie. More importantly was Digital Media ARR -- or annualized recurring revenue -- grew to $7.47 billion, an increase of $406 million over the first quarter. This subscription based, repetitive income is exactly what is coveted across businesses this year. (That's precisely why I got myself long Zuora ( ZUO) in the first place, and why I not only stuck with that name, but added in response to that firm's post-earnings beat-down.)
Investors should see that Adobe generated operating cash flow of $1.11 billion. That's 13.6% growth from the same quarter last year. Not only is this impressive, it leaves the firm with a cash position of more than $2 billion. Debt levels remain high, and that does place the firm's current ratio below levels I generally prefer, but with cash flow like that, and the consistent earnings growth seen not just for Adobe, but for the expected continuance of the digitization of world economies, I do not see this as a reason to exit my long position.

CEO Shantanu Narayen guided third-quarter results below Wall Street consensus, looking for earnings per share of $1.95 on revenue of $2.8 billion. Wall Street had been looking for something more like $2.05 on $2.83 billion. But I think at least part of the reason that overnight markets looked past this guidance might be Narayen's reference to "seasonality" on the call last night.
While not offering guidance for the fourth quarter -- Adobe never does at this time -- the firm avoided addressing the full year, too, and used the word "strength" when referencing the last quarter of the year.
On top of that, keep in mind that the firm, while it does not pay shareholders a dividend, did repurchase 2.5 million shares throughout the second quarter for a cool $659 million. The authorization for this program that is good through 2021 still leaves $6.6 billion in potential purchasing power out of an original $8 billion. In other words, the company is in the foxhole with the investor. 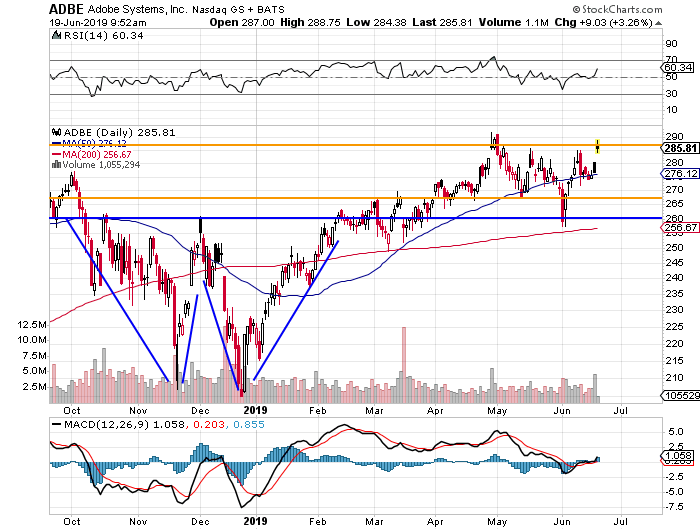 This chart is similar to the one on Tuesday, I just cleaned up some of the lines that bothered me. As you quickly see, the shares are trying to -- but for now at least failing to -- break out of the basing pattern that developed in response to the breakout from the double-bottom. Key to an out-sized breakout on these earnings on top of what we have already seen, would be a take and hold of the last April and  early May highs around the $292 level.
Based on what I see, even if the market takes its time making that push, I really like this name -- and I might be biased, so weigh that when making your decision. My price target is $340, predicated on this stock breaking out beyond that $292 pivot that generates increased accumulation. Should my thesis fail, my panic point remains $265.

For The New Kids

Those who have been long on ADBE for a bit are sitting on nice profits. We have some wiggle room. Other folks might be wondering if they can still enter the name up here. Those looking to take a bullish position, but experience less risk could... in minimal lots... by doing the following:
Purchase 100 shares of ADBE at or close to the last sale of $287.
Sell one ADBE Sept. 20 $305 call (value: $8.50)
Note: premium from the sale of the call reduces net basis to $278.50, but caps profit through the expiration date to $305, or a profit of 9.5%.
Or, they could:

Purchase one ADBE $290 Sept. 20 call (value: $15.15)
Sell one ADBE $310 Sept. 20 call (value: $7.05)
Note: The net debit or outlay for the investor is $8.10, or $810, in an effort to win back a maximum sum of $20, or $2,000 by September. In other words, the investor is betting $810 to try to win a profit of $1,190, or 147%. While this second choice potentially leaves the investor with an equity stake, the investor has no downside risk beyond the initial outlay.
Salesforce.com is a holding in Jim Cramer's Action Alerts PLUS member club.
Get an email alert each time I write an article for Real Money. Click the "+Follow" next to my byline to this article.
TAGS: Investing | Stocks | Technical Analysis | Fintech | Technology

Those who chased some of the highest risk situations suddenly are being badly burned.

Turn a Stock's Bad News Into Your Investing Advantage

Let me show you how with the shares of discount retailer Kohl's, which just cut guidance.