By STEPHEN GUILFOYLE Jun 25, 2019 | 12:23 PM EDT
Stocks quotes in this article: ABBV, AGN, IBM, RHT, CRM, DATA, PFE, ARRY, INCY
Approximately $63 billion. So, it is that price at which AbbVie ( ABBV)  has agreed to buy Allergan ( AGN) . It's not a problem at all when a firm -- who finds its own growth slowing -- goes out and buys growth. Often the acquirer ends up paying what looks like more than a bundle for this renewed opportunity to grow. IBM  ( IBM) comes quickly to mind, with the Red Hat ( RHT) deal. We have seen this in tech over and over, and not just to grow. Salesforce.com  ( CRM) was indeed having no issue increasing sales at their steady pace, when it reached to grab first Mulesoft, and now, Tableau Software  ( DATA)  to more perfectly refine an already best-in-breed business of cloud offerings. Is this refining what AbbVie was after, or more of a grab for growth? Let's explore.

At first glance, both firms seem to be having a rough go of it. That said, I think Allergan CEO Brenton Saunders deserves a big round of applause. AGN shareholders will receive for each share, $120.30 in cash (the shares closed on Monday night at $129.57), as well as 0.866 share of ABBV in exchange. Wow, nice trade.
Shares of AGN have struggled for year now, trending regularly lower, with the exception of a nice respite mid-2018 that eventually petered out. In May, however, AGN surprised Wall Street with solid fiscal second-quarter beats for both earnings per share and revenue, though revenue still showed year-over-year contraction. There were two interesting takeaways from that release. One, the firm raised full-year guidance for both sales and adjusted profitability. Two, Botox -- plain and simple. Botox is Allergan's best-selling product at more than $868 million for the quarter, good for 6.3% growth. It easily out-performs most of the rest of the firm's portfolio of products.
Hence, AbbVie needs to diversify its own portfolio, even if forced to pay up for growth, as Humira, its best-selling auto-immune treatment will lose patent protection and face stiff, cheaper competition by 2023. By the way, Humira is worth about 60% of AbbVie's aggregate revenue generation. This move came of nothing but necessity, despite some overlap across other product lines such as treatments brain disorders and women's health.

For shareholders of Allergan, congratulations. That ship has now sailed. Take a victory lap and move on to the next thing. AbbVie becomes interesting now, but at what price does it make sense? I don't think that I take a shot at either of these stocks. I think that in the wake of this deal -- and the Pfizer ( PFE)  purchase of Array BioPharma ( ARRY)  -- that playing other names would be of interest. Look for names in the space that on their own merits also have the ability to attract the attention of Big Pharma. Remember, we fast approach another election season, and just about the only thing that Democrats and Republicans agree on is using Big Parma as a political pinata.
One name I have been watching as I look for a technical breakout is Incyte ( INCY) , a U.S.- company, whose lead product treats blood cancer. In fact, I'm long (small) on INCY. 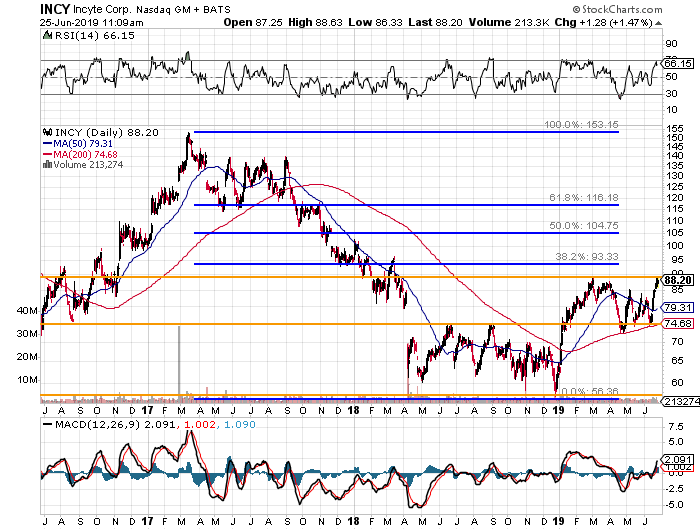 Look how volatile the chart is? Yet, the shares based for most of 2018 after a significant beat-down, then used prior resistance as support as the shares consolidated on top of that base. Now... it's poised to break out again. Worthy of some risk? Yes, in my opinion. Not only are earnings and sales both growing like a weed for this name, but from December through March, the firm saw a 13.6% increase in the number of funds that had taken a stake, all while management has retained 17% ownership of the company. The downside? The shares trade at 30-times forward-looking earnings.
Salesforce.com (CRM) is a holding in Jim Cramer's Action Alerts PLUS member club.
Get an email alert each time I write an article for Real Money. Click the "+Follow" next to my byline to this article.
TAGS: Mergers and Acquisitions | Investing | Stocks | Pharmaceuticals | Stock of the Day