Thursday had something for both the bulls and the bears. Let's start with what the bulls got.

The bulls have breadth. They have had breadth for quite some time and they still have it. We've looked at the McClellan Summation Index a number of times in the last few weeks -- it's still rising -- but take a look at the Cumulative Advance/Decline line for the New York Stock Exchange.

The blue line is breadth. Notice that the S&P is milling around at 4200, in the area of the early June high. Notice that breadth is well above that area already. In fact, breadth is now closing in on the early April high. That would be the equivalent of the S&P being back at 4600.

Breadth doesn't always diverge at highs (see the April high), but look back at the January high and you can see that the S&P 500 made a higher high, while breadth made a lower high.

The bulls have the put/call ratio, which can't seem to fall, although there was a minor change on Thursday. You see, Thursday, despite the reversal from a big up to a slight down found the put/call ratio at .92. Believe it or not, that was the lowest reading of the week. Perhaps folks are easing off the bear train? 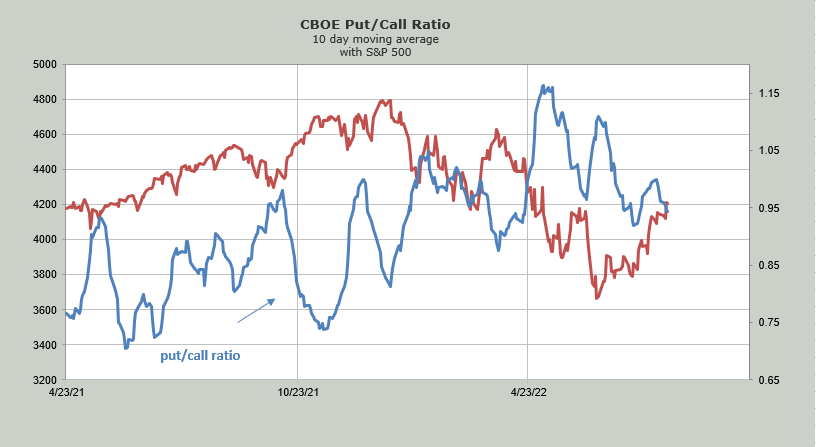 The bulls have the American Association of Individual Investors' weekly survey with the bears down two and the bulls up two. There are still more bears than bulls in that survey.

The bears have bonds. Interest rates have begun to tick back up. Notice that the yield on the 10-year crossed over a downtrend line that has been in place since June.

The reversal in HYG is in the same category. It got to resistance, so it's not unusual for it to have reversed. If $77.50 cracks on HYG it will be more than a "backoff" from resistance.

The bears can point to the overbought market.

The bears might also care to note that the National Association of Active Investment Managers finally increased their exposure to 71. It was 20 in June. Now, 71 is not extreme, but it showed a decided change in sentiment. It is similar to the Investors Intelligence bulls and bears we looked at yesterday, where the two groups have changed places since June. It's not extreme but a definite change in sentiment. 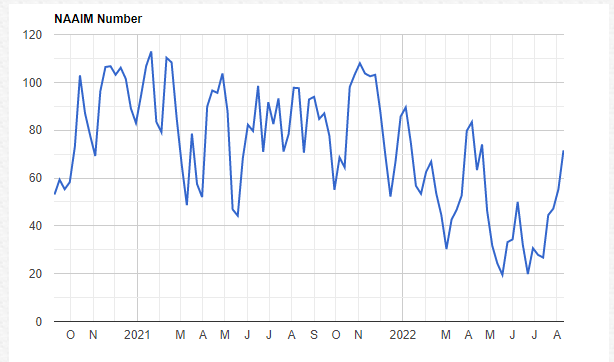 Finally the Daily Sentiment Index (DSI) for the Volatility Index, despite the reversal in the market, was up only three points, so it stands at 18 now. That means even if the market rallies on Friday, this is likely to go lower and into the warning zone.

You can pick which side you prefer, but I say we're more apt to get more volatility in late August/early September, than we've experienced in the last two months.