So, stocks pulled back. About the only surprising part of the pullback was the little bit of put-buying on Friday. That confirms that sentiment really did start to shift -- finally -- late last week. For the first time since mid-April the put/call ratio for exchange-traded funds was under 100% for three-consecutive days. This despite the weekend of uncertainty on the docket.

And it wasn't just the weekend -- isn't the whole week we're in now a wild card? We've got the G-20 meeting in Osaka, where no one will care about the communique at the end, only at what comes out of the meeting between President Donald Trump and Chinese President Xi Jinping. We've also got the end of the quarter, which almost always brings us some wild market moves.

But there's more. We have the Russell 2000 rebalancing. And, of course, there is always the prospect of more conflict with Iran. It's no wonder the Volatility Index was green on Friday.

Yet, it is curious that the put/call ratios all leaned low. I believe that is that shift we discussed late last week.

I haven't, however, changed my view on the market. I still think a pullback would be followed by another rally. That view would likely change as the intermediate-term indicators get overbought, which at this point look like it could happen around mid-July.

So let's talk about the bonds. A few weeks ago, when the yield on the 10-Year Treasury note was around 2.1%, the Daily Sentiment Index (DSI) tagged 90. At the time I wasn't sure if bonds would stage a serious rally yet. But over the next few weeks, I expected yields would start rising. So far that assessment has been wrong, because the yield on the 10-Year Treasury note is now around 2.06%.

You can see the resistance that comes in now for a yield right at that 2.1% area, but let's get back to sentiment. Last week we discussed the Bank of America Merrill Lynch Fund Manager Survey Survey for stocks, and how slanted it was away from stocks and toward cash? It turns out the bond one is equally eye-opening. See for yourself: 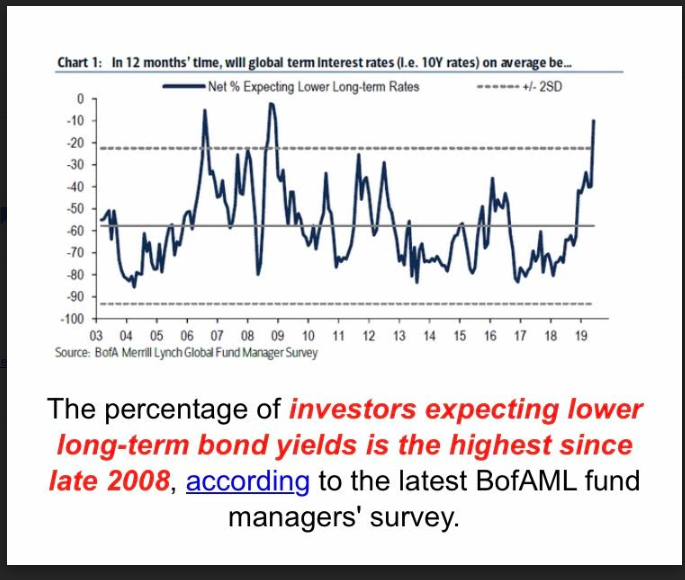 This is for global interest rates, not just those in the U.S. But it hasn't been this high in terms of expectations for lower rates since the end of 2008, during the height of the financial crisis. I would think that even if 12 months from now global rates are lower than they are now, in the near term this seems excessive, considering how far the bonds have already come.

Therefore, I will repeat what I said a few weeks ago: I think this is not a good time to chase bonds, those rates should back up for a bit. Nothing goes in one direction forever.

Get an email alert each time I write an article for Real Money. Click the "+Follow" next to my byline to this article.
TAGS: Small Business | Investing | Small Cap | Stocks | Technical Analysis | China

Will Stimulus Spur a 'Buy the Rumor, Sell the Fact' Trade?

As governments pile on the cash amid COVID, let's look at how the headlines could move oil and bonds -- and how the two are 'bonded' together.

Let's look at seven names that you can buy right now and watch grow.