It is really something watching the huge rise in sovereign yields. Our Two-Year Treasury yield is above 4% for the first time since 2007, with the 30-Year Treasury not far behind in broaching that mark. The 10-Year Gilt can better that with a 4.5% from under 1% to start 2022. German 10-Year Bund yields have crossed 2% for the first time since 2014. Meanwhile, the yield on 10-year Italian sovereign debt is more than twice that of its German counterpart, which is conjuring up images of the Greek debt crisis of over a decade ago but involving a much larger economy.

I can't shake this feeling that if debt markets continue to head in this direction something significant is going to break in the markets and the economy. Because I have little to no conviction in equities even with their big selloffs so far in 2022, in times like these I like to look at what insiders are buying with conviction for potential new trade ideas. Here are two names with new insider buying that recently popped onto my radar.

Let's start with a well-known tech name, Adobe Inc. (ADBE) . This digital media software company has been pummeled like so many of its tech brethren in 2022. Indeed, Adobe shares have been cut in half so far this year. Adobe recently reported a mixed second-quarter with the company beating on bottom-line expectations but coming in a bit light on the revenue side even as revenues were up nearly 13% on a year-over-year basis. 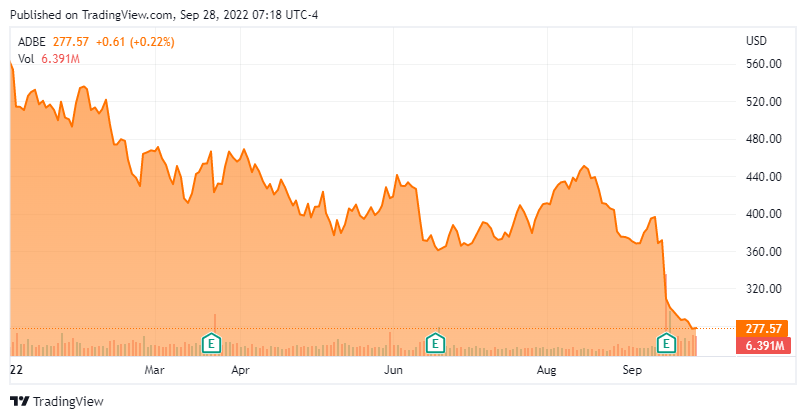 However, what really has investors chapped lately is Adobe spending $20 billion to acquire privately held competitor Figma, a deal that was announced last week. Figma is a web-first collaborative design company and is a good strategic fit. However, several analyst firms have said the deal was an expensive purchase and comes at a time when investors are already jittery.

Adobe's CFO bought more than $900,000 of Adobe stock last Thursday, which was the first insider purchase in this equity since early in the year. Adobe sells for just over 20x this year's expected profits, a much lower valuation than where it started the year. Perhaps Adobe is a story to monitor or act upon in the weeks ahead once the stock establishes a floor.

Then there is Braze Inc. (BRZE) , a smaller, off-the-radar tech name. Braze has combined numerous customer engagement technologies on a single platform that enables customer-centric interactions between consumers and brands in real-time. The technology allows clients to better tailor marketing campaigns to the nuances of their individual businesses and more effectively interact with their customers.

Like Adobe, Braze's market cap has shrunk by nearly 54% in 2022 as the fizz has gone out of growth stocks. Insiders sure seem to believe in the company's longer-term prospects. Beneficial owners and company officers have scarfed up nearly $50 million in Braze shares over the past two weeks.

Braze is some time away from profitability but should deliver 45% sales growth this fiscal year. The stock got a slew on analyst firm Buy reiterations after it released second-quarter numbers on Sept, 12. A few included upward price target revisions, a rarity these days. Braze has more than $500 million of net cash and marketable securities on its balance sheet.

Get an email alert each time I write an article for Real Money. Click the "+Follow" next to my byline to this article.
TAGS: Investing | Stocks | Software & Services | Technology | Real Money | Insider Trading