Jim Cramer finished up his Mad Money game plan Friday for his viewers mentioning another earnings report due out this week. On Friday he noted we'll get a read on local economies from First Horizon National (FHN) .

Let's check out the charts of FHN.

The On-Balance-Volume (OBV) line has been stalled since March. The Moving Average Convergence Divergence (MACD) oscillator is well below the zero line in bearish or sell territory.

In the weekly Japanese candlestick chart of FHN, below, we see a challenging setup. Prices have made a top reversal pattern in May with several doji or spinning tops before a bearish candle at the beginning of June for confirmation. The slope of the 40-week moving average line is still positive but it intersects at $15.50 or so and could be tested soon.
The weekly OBV line has rolled over telling us that sellers of FHN are now more aggressive. The MACD oscillator has crossed to the downside for a take profits sell signal.

In this daily Point and Figure chart of FHN, below, we can see a possible downside price target of $14.70. If this target was reached it would mean FHN is testing the 200-day and the 40-week moving average lines. 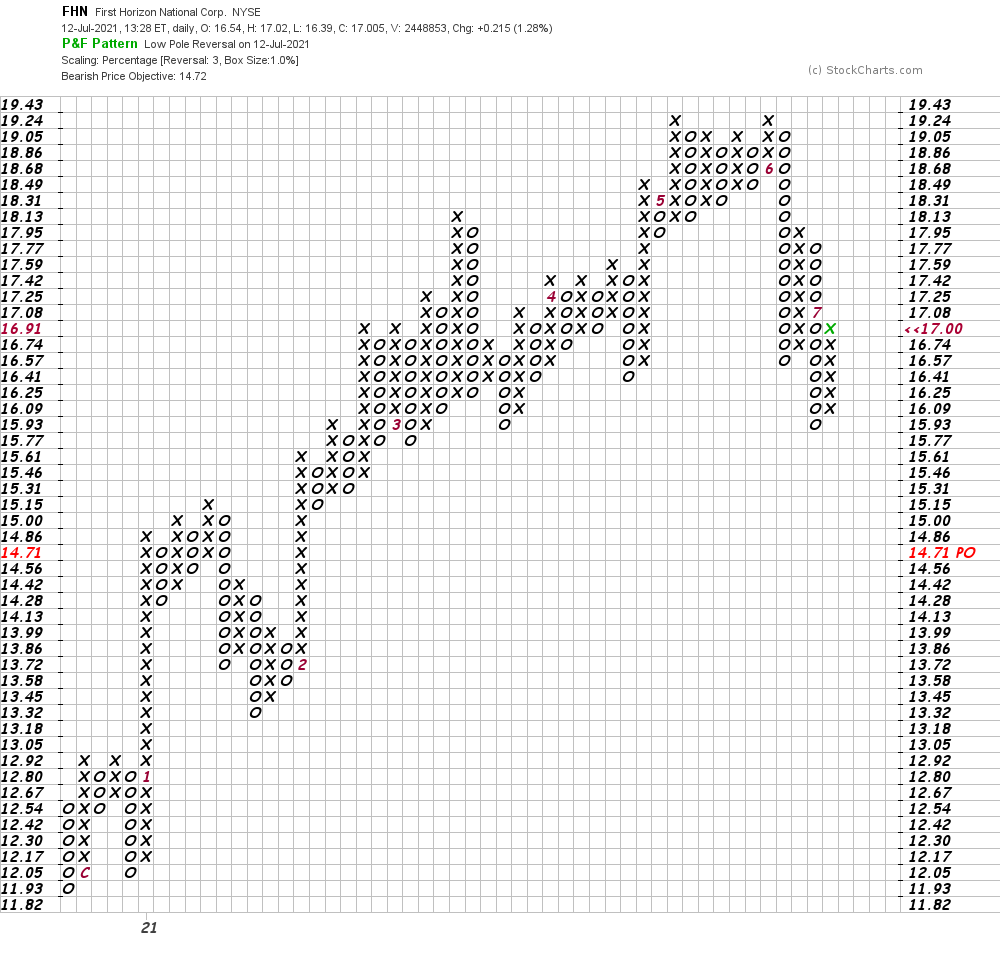 Bottom-line strategy: Ahead of its earnings announcement on Friday, FHN's charts look weak and suggest the risk of further declines. I would avoid the long side of FHN for now.
Get an email alert each time I write an article for Real Money. Click the "+Follow" next to my byline to this article.
TAGS: Investing | Stocks | Technical Analysis | Banking | Financial Services | Mad Money | Earnings Preview

Checking Goldman Sachs Ahead of Earnings

Let's dive in on the charts and see what's in store for the stock.

Traders need to take Fed members at their word when they say they want rates higher and for longer than the market is expecting; also, AMD lays an egg.

We're Changing Our DexCom Strategy as the Shares Move Higher

Can the Market Avoid a Retest of Lows as More Economic News Hits?

We'll see how September jobs data and next week's CPI report affect the outlook of traders.

It's September Jobs Day, so we'll see where a sputtering market goes from here.