By STEPHEN GUILFOYLE Apr 06, 2020 | 12:15 PM EDT
Stocks quotes in this article: JPM, C, WFC
JPMorgan Chase  ( JPM)  has long been considered by me -- and many others -- to be the "best in breed" large U.S. financial operation. So, admittedly, I took profits on JPMorgan way, way too early in the late, great bull market.
The good news would be that I also left the other two names that I had dabbled and invested in, Citigroup ( C)  as well as Wells Fargo ( WFC)  once the three-month/10-year Treasury yield spread re-inverted in mid-to-late February. That saved me a lot of pain, at least across this sector, as I had no exposure to financials during the meltdown.
Still, I knew when I did rebuild some longs that I would start with JPMorgan, as well as Well Fargo. Best in breed (and worst in breed -- but with a new CEO whom I trust). A real strategy? I'll let you know later. I have re-engaged in both of these names right now, both positions are in their infancy, meaning that I am just one tranche into both with plans to amass more shares at a discount, should the environment provide that opportunity.

The CEO Is Back: Jamie Dimon

My first concern was the CEO at JPMorgan. Would he even return from heart surgery? In the middle of an incredible public health and financial crisis? That question has been answered. Dimon is at work and has released his annual letter. That's a positive. Now, I am in two banks, and I like both CEOs.
Dimon was blunt in his letter. He discussed cancelling the firm's share repurchase program, as "very prudent," as he feels a "bad recession"  that will include increased levels of financial stress globally is upon us.
Dimon warns that 2020 earnings "will be down meaningfully." He goes on to say that the firm has not requested looser regulation, and went on to focus on the firm's ability to continue lending, even should circumstances continue to deteriorate. On that note, Dimon feels that JPMorgan would be able to increase lending to the firm's clients should domestic gross domestic product decline as much as 35% (annualized) for the second quarter, and then stay there. Dimon also indicates that his possibility, which is a considerably worse outcome than most expect at this time, would be the only eventuality where consideration would be given to cutting the dividend, which would obviously hurt the share price.

In short, Dimon is back, which by itself is a shot in the arm.The firm is in good shape, is active and will continue to be active in creation of liquidity solutions for clientele, is not going to repurchase shares even at this lower price, and after some hiccups, is working remotely enough to keep the whole ball of wax moving.
Prior to the crisis, the firm had built a "fortress-like" balance sheet, which in times like this, and what we may be facing, will prove prescient. The shares are difficult to value at this point, as is the future difficult to foretell. Tangible book value at its most recent tabulation (end of year) ran at $60.98 per share. That annual dividend of $3.60, at this level will yield nearly 4.3%, and we know that the bank will defend the dividend.
Do we know where the shares go form here? Of course not. Do I think the shares are worth scaling into? Well, yes, and that is how I am going about my business. 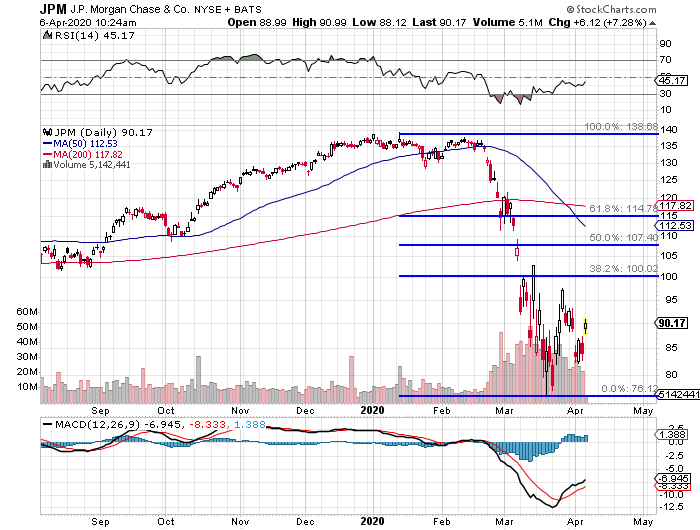 My current plan? Well, I will not add on a day like this, with the whole sector, or the entire market moving multiple percentage points higher. I will add on weakness, really I do that, down to $80, and if fortunate enough to add to my existing long, start peeling a portion at par ($100). Should I not get a chance to turn what I now have into an investment, I will declare my current long a trade, and shoot for $107. As for a panic point, I don't think so. As for Wells Fargo, I may add, but the conviction is not there for me in the way that it is for JPM.

(JPM and C are holdings in Jim Cramer's Action Alerts PLUS member club. Want to be alerted before Jim Cramer buys or sells these stocks? Learn more now.)

Get an email alert each time I write an article for Real Money. Click the "+Follow" next to my byline to this article.
TAGS: Investment Banking | Investing | Stocks | Banking | Diversified Financials | Financial Services