That was a good start to an overbought pullback where folks had gotten far too bullish, wasn't it? Quite frankly there wasn't much intense selling. Oh, sure, there were pockets here or there of intense selling and it was widespread, but overall the selling was minimal.

It was the sort of selling that we tend to get at an overbought reading. It was the sort of selling we tend to get when sentiment gets a bit too exuberant. And, yes, as of Wednesday, there was exuberance. I noted the Investors Intelligence bulls were kissing 60%. Then, Thursday morning, we saw the American Association of Individual Investors (AAII) chime in with their most bullish bias in almost three years. Yes that long.

The last time the AAII bulls were 56% as they are now was early January 2018 when they were just shy of 60%. The market rallied for a few more weeks before we had a sharp one-plus week correction to the downside when the volatility products imploded. You can see that the shift in sentiment is something to behold. 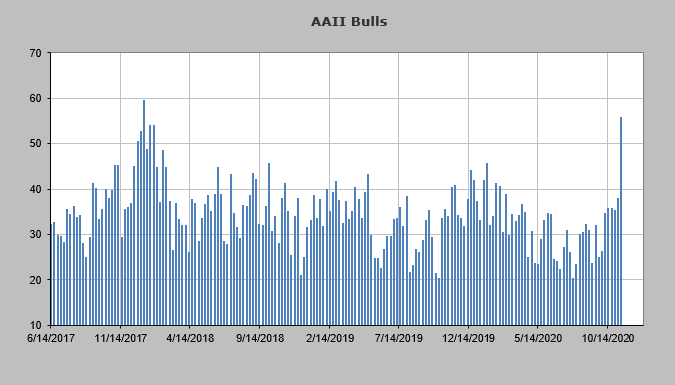 Even the bears tailed off and now stand at 24%. In January 2018, they were down near 20%, but this is the lowest reading for bears since pre-pandemic, so we can see the shift here, too. 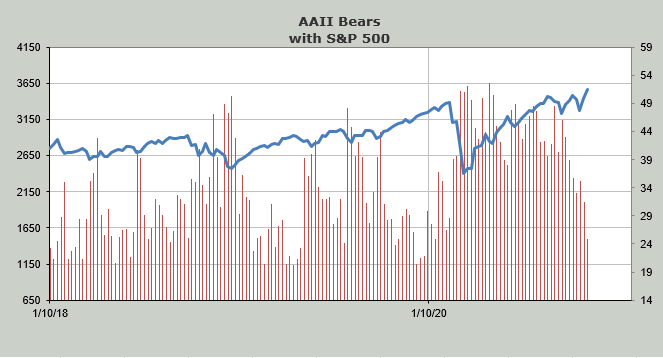 Then there is the National Association of Active Investment Managers (NAAIM) who last week saw their exposure to the market at 66% and this week are at 96%. I suppose we might say that at least their exposure is not over 100% as it was in late August and early October, but it too is showing us the shift in sentiment. 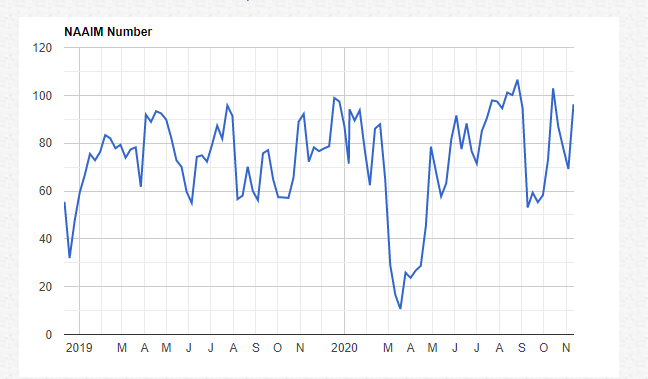 As for the overbought-ness, days like Thursday help work that off. You can see the Overbought/Oversold Oscillator is already heading back down, working it off.

I wouldn't be surprised to see the market have another attempt at a rally Friday and/or Monday, and then come back down again. What would make this overbought and too bullish sentiment reading more concerning would be if the indicators, such as the McClellan Summation Index, were heading south. For now the Summation Index is still able to withstand the selling and stay upward. If we got another few days of big cap tech rallying and everything else selling off, that would start to roll these indicators over. For now it's more like it is working off the overboughtness and sentiment. In other words, we haven't seen enough deterioration underneath to think this is more than another pullback.

And hey, the Daily Sentiment Index (DSI) for the Volatility Index shot right back up to 16 after consecutive days at 10. It remains an either/or Market.