Most of the major equity indices closed slightly lower Tuesday, following Monday's significant gains, although all but one are still in near-term uptrends. Monday's gains, however, did cause some shift in the data that, while not threatening, is notable.

Our net takeaway is we suspect there may be a pause/retracement of some of the recent gains over the very near term. 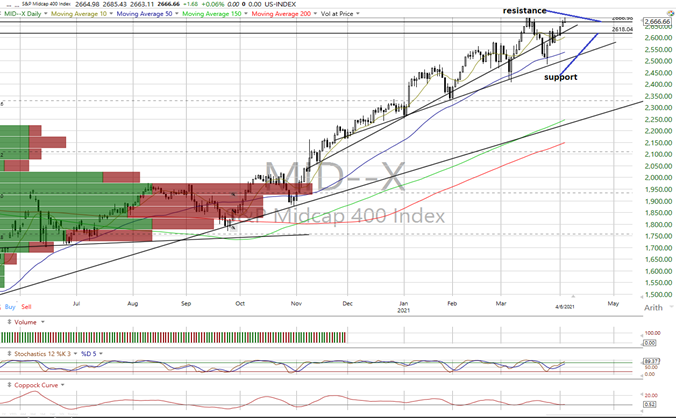 Most of the major equity indices posted minor losses Tuesday except for the MidCap 400 (see above) and Value Line Arithmetic Index, which had minor gains.

Market internals were generally positive. No shifts in trend were generated, leaving all in near-term uptrends except for the Russell 2000, which remains neutral.

Cumulative breadth remains positive on the All Exchange, NYSE and Nasdaq with all above their 50-day moving averages as well.

Given recent strength, it's not unusual to find the stochastic levels well into overbought territory that possibly suggest some pause or consolidation of recent gains. Yet, no bearish crossovers have been generated in this regard. They can stay overbought for extended periods.

The data have turned a bit more mixed.

The McClellan one-day Overbought/Oversold Oscillators remain neutral for the All Exchange and Nasdaq but is slightly overbought on the NYSE (All Exchange: +37.18 NYSE: +50.49 Nasdaq: +27.65).

The Rydex Ratio (contrarian indicator), measuring the action of the leveraged ETF traders, has seen a significant move back into bearish territory to 1.16 from its prior 0.39 reading just from last Friday. They are back to somewhat highly leveraged long exposure.

Valuation still appears extended despite the jump in forward 12-month consensus earnings estimate for the S&P 500 from Bloomberg to $181.42 per share from $175.00 with the addition of second-quarter 2022 estimates. This leaves the S&P's forward P/E multiple at 22.5x while the "rule of 20" finds fair value at 18.3x.

We reiterate the valuation spread has been consistently wide over the past several months while the forward estimates have risen rather consistently.

The 10-year Treasury yield slipped to 1.66%, but remains in an uptrend with potential to test the 1.8% level with support at 1.55%, in our view. We continue to monitor 10-year closely as it has been having rather significant influence on the equity markets of late.

We remain near-term "neutral" as it would not be unusual to experience some pause or consolidation of recent market gains before the current uptrend would be expected to resume.