"Live in the sunshine, swim the sea

Just a little after midday. Markets had rebounded fairly well off of the vicious beating handed down from Mount Olympus on Wednesday in response to the now much- discussed April Consumer Price Index (CPI) data. Thursday morning traders seemed to shrug off April Producer Prices that were also a bit on the warm side, instead focusing on the weekly Initial Jobless Claims numbers that continue to improve slowly. That rebound lacked enthusiasm, though. Trading volume was admittedly running on the low side as equity markets wound their way through the morning hours. As the noon hour, not to mention my PBJ, came and went on the East Coast, the selling that really only started taking control in late morning had intensified.

The United States Treasury had auctioned off $27 billion of 30-year bonds. The auction went poorly -- in fact, very poorly -- which may have been a surprise coming just a day after such a successful auction of U.S. 10-year notes. Bid to cover fell short of 2.22. Indirect bidders (foreign central banks) took down just 59.9% of the issuance. Apparently a high yield of 2.395% over 30 years was far less attractive than 1.684% over 10 years was 24 hours earlier.

My mind got to work. Were foreign central banks expecting the Fed to chase inflation, hence firming the dollar over coming years, but afraid long-term that the United States Treasury would at some point be forced to monetize what then might be a debt load too large to service? Or that the U.S. might have by then resorted to Modern Monetary Theory?

Either of those two paths would likely cause the U.S. to sacrifice reserve currency status, rendering the U.S. dollar nearly worthless relative to peer currencies. My mind sometimes runs ahead. I play chess with a distant future that I am likely far too old to participate in. Still, in response to that auction, the Nasdaq Composite would even go red at one point. Then it happened.....

The skies seemed to part. The breeze took that burgeoning storm out to sea. I saw the cutest little bird with colorful wings pausing to rest on my Japanese maple. I heard children laughing in the distance, their laughter echoing from building to building. My mind wandered. I saw your face, even if only a distant vision. Your warming, welcoming grin. I had only seen eyes, eyes that betrayed fear and frustration for oh so long. This was different. Your eyes now smile, accenting your lips, nose and cheeks. Is it really you? Can I see you there? Can you see me here? Mom, Dad ... I pray for you every morning. I have missed you so much.

The news hit the tape on Thursday afternoon, and all major equity markets lifted off simultaneously. Longer-dated Treasury yields came in as capital flowed into those markets as well. Yes, the messaging has been mixed. The Centers for Disease Control (CDC), sloppy under the past administration, had shown literally no improvement whatsoever in straightforward messaging even under new management. These latest words were, however, clear.

Rochelle Walensky, current director at the CDC addressed the media: "Anyone who is fully vaccinated can participate in indoor and outdoor activities, large or small, without wearing a mask or physical distancing." The mood of a nation seemed to improve instantly.

Now, the CDC does not set rules; rules are set regionally. We do know, however, that the two large states that had suffered the least economically throughout this year and had endured the least change in personal torment had been the two that had scrapped pandemic-era rules the earliest -- Florida and Texas -- and did not suffer the expected outsize surge in new infections or deaths relative to states that had placed the most restrictive rules on their populace. Meanwhile, the talk in New York (and probably California, but I am here, not there) is not about getting back to normal, but wondering to what degree the city will ever be able to recover.

Of course, there are exceptions to the new guidance. Masks are still required for those entering hospital settings or traveling via mass transit. The greatest stimulus plan of all has always been getting to the point where people feel free to safely go about what had been at one time their daily routines. Roughly 265 million jabs have been administered in the U.S. since December. About 59% of U.S. adults have been jabbed at least once. President Biden's stated goal is 70% by Independence Day. The 59% number translates into 35% of the entire U.S. population being fully vaccinated. Now, the CDC has also recommended the Pfizer (PFE) /BioNTech (BNTX) vaccine for use across the 12- to 15-year-old age group, setting up adolescents, perhaps our most socially active demographic, for potential immunity.

Will some folks fake having been vaccinated just to walk around with no mask? Of course they will. I know several people who are dumb enough to put themselves, their families and the people they meet all at risk just to make a point. I cannot tell you what to do. I do hope that if you choose to go unvaccinated that you are responsible about that. I do know that I am an old man. My parents, as you might have guessed, are even older, but they are both still kicking. Without these vaccines, I might have never seen them again.

Think you miss your parents when you leave home at the age of 17 to serve your country? You do. Nothing like having your tail handed to you at that age, far from home with no available communication other than the written letter. Try being in your late 50s and suffering through the illness of your lifetime, all the time being worried about your parents, one of whom collects co-morbidities as if they were baseball cards. That's anguish. But we are at this point. Pfizer, Moderna (MRNA) and Johnson & Johnson (JNJ) got us here. Mom, Dad... I'm coming home.

Ten of the 11 S&P sector SPDR ETFs closed in the green on Thursday. Even though Utilities (XLU) , which is a defensive sector, led the way and Energy (XLE)   which is a cyclical sector, finished last (as the Colonial Pipeline got things rolling along), cyclicals did outperform for the session as you might have expected. Industrials (XLI) , Financials (XLF) and Materials (XLB) took places two through four. Across the landscape of equity indices, just as you probably also expected, the Dow Transports and small- to mid-caps (S&P 400, S&P 600, Russell 2000) easily bested large caps. The Nasdaq Composite and Nasdaq 100, though up nicely, still lagged the rest of the general marketplace by a wide margin.

As for breadth, winners beat losers by more than two to one at the New York Stock Exchange and just by 11 to 10 at the Nasdaq. (I was going to write a "smidge" but 11 to 10 made me giggle so I stuck with it).

Here's the kicker (remembering Garo Yepremian's attempted pass in the Super Bowl)... advancing volume did beat declining volume at the NYSE fairly decisively, but the opposite was true at the Nasdaq, despite the Nasdaq's headline indices shading an almost forest-colored green. Trading volume moved sideways on Thursday from Wednesday, but remember that volume was light early in the session when the markets opened higher.

Late volume, when the markets re-entered rally mode, also looks a little light-ish, yet during the midday hours, or when equities were selling off, trading volume was clearly heavier at both exchanges relative to the midday hours for days one through three of this week. I would take that as a sign of caution even though equity index futures are trading nicely higher overnight into early morning here on Friday. 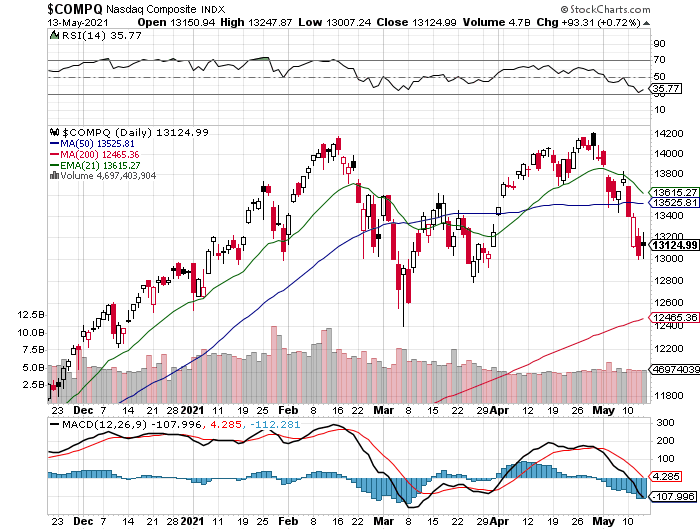 Readers will see the Nasdaq Composite still out in the open, near neither support nor resistance. I showed you the above chart on Wednesday morning. I want you to notice Thursday relative to Wednesday, below.

The entire Thursday candlestick, despite being black, fits inside of the Wednesday candlestick. In fact, the range in between Thursday's open and close easily fits within the range of Wednesday's open and close. I have discussed "Inside Days" before. If you are new to my work, "Inside Days" always signal a reduction in volatility, but do not -- let me repeat that -- Inside Days do not signal a change in trend. This is a two-day pattern of continuance. The short-term pattern for the Nasdaq Composite has been lower as you can plainly see.

What that means is that I will continue to tread lightly in the kinds of names that dominate the Nasdaq, which to me means technology and small-caps. That does not mean I am getting out of my semis or big, profitable tech. It does mean that, in this environment, anything that does not have a positive number for GAAP (not adjusted) net income remains toxic.

Understanding what I just wrote, would I.....

1) Chase after DoorDash (DASH) , which is up overnight on earnings? No.

2) Buy the dip in Walt Disney (DIS) , which is trading lower on earnings? I already have, and might buy more.

Get an email alert each time I write an article for Real Money. Click the "+Follow" next to my byline to this article.
TAGS: Fundamental Analysis | Investing | Stocks | Treasury Bonds | Real Money | Coronavirus | Earnings | ETFs