The charts saw a combination of positive and negative technical events registered on Tuesday while the data suggests that a likely near-term bounce has potential for failure.

In our view, we have yet to see indications that imply we are out of the proverbial woods. 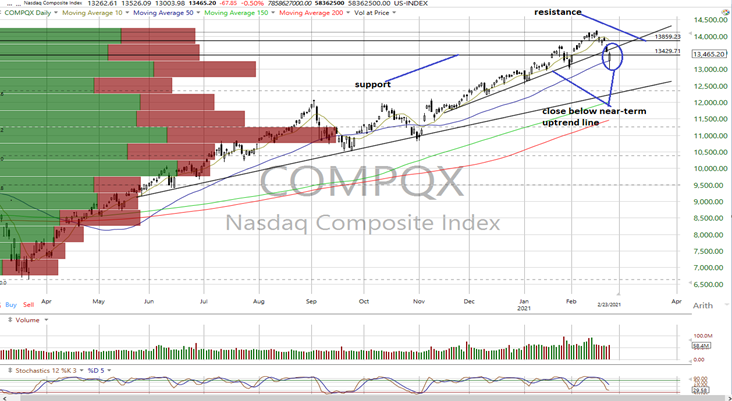 The early session notable losses were largely erased by the close, leaving the S&P 500, DJIA, Dow Jones Transports and MidCap 400 higher on the day as the rest posted declines.

The Dow Transports made a new closing high. However, the Nasdaq Composite (see above) closed below its uptrend line for the first time since its inception in early November, turning said trend to neutral from positive.

As such, the Nasdaq Composite and Nasdaq 100 are neutral, the Russell 2000 negative with the rest of the indices still in near-term uptrends.

Unfortunately, breadth deteriorated. The cumulative advance/decline lines are now negative on the All Exchange and Nasdaq with the NYSE now neutral.

No signals of import were generated on the stochastic readings.

The McClellan one-day Overbought/Oversold Oscillators are now suggesting a possible bounce with the All Exchange and Nasdaq oversold (All Exchange: -61.4 NYSE: -43.04 Nasdaq: -74.84).

However, the Open Insider Buy/Sell Ratio saw a further increase in insider selling, dropping to a bearish 17.8.

In contrast, the leveraged ETF traders measured by the detrended Rydex Ratio (contrarian indicator) are still leveraged long at 1.16.

The insider/ETF Trader dynamic continues to suggest caution, in our view.

The forward 12-month consensus earnings estimate for the S&P 500 from Bloomberg lifting to $172.63 per share leaves the S&P's forward P/E multiple at 22.5x while the "rule of 20" finds fair value at 18.6x. Again, the valuation spread has been consistently wide over the past several months while the forward estimates have continued to rise consistently.

The 10-year Treasury yield dipped to 1.36% but has been consistently rising over the past few months. In our opinion, the 10-year chart still suggests potential for a move up to 1.5%.

With the OB/OS suggesting a bounce countered by the continuing negative Insider/Rydex signal and deteriorating breadth, we are maintaining our near-term "neutral" outlook for equities in general.