During Friday's Mad Money program Jim Cramer told viewers the highlights of his game plan for this week with many important companies reporting earnings. Cramer noted that on Wednesday, we'll hear from Boeing (BA) , Facebook (FB) , Ford (F)  and McDonald's (MCD) , among many others.

Cramer was bullish on all of these stocks, but said Boeing will get worse before it gets better.

Let's check out the charts of this aerospace giant and Dow Jones Industrial Average (DJIA) component.

The On-Balance-Volume (OBV) line shows weakness from December and tells us that sellers of BA have been more aggressive for several months now. The Moving Average Convergence Divergence (MACD) oscillator is below the zero line and bearish.

In the weekly Japanese candlestick chart of BA, below, we see a mixed to weak picture. Prices have been recovering from the March 2020 low but have declined the past five months to break the rising 40-week moving average line. Lower shadows are not visible during the decline telling us that prices have not reached a level or area where traders are rejecting the lows.
The OBV line shows weakness from last June/July. The MACD oscillator has been pointed lower since April.

In this daily Point and Figure chart of BA, below, we can see a downside price target in the $201 area. 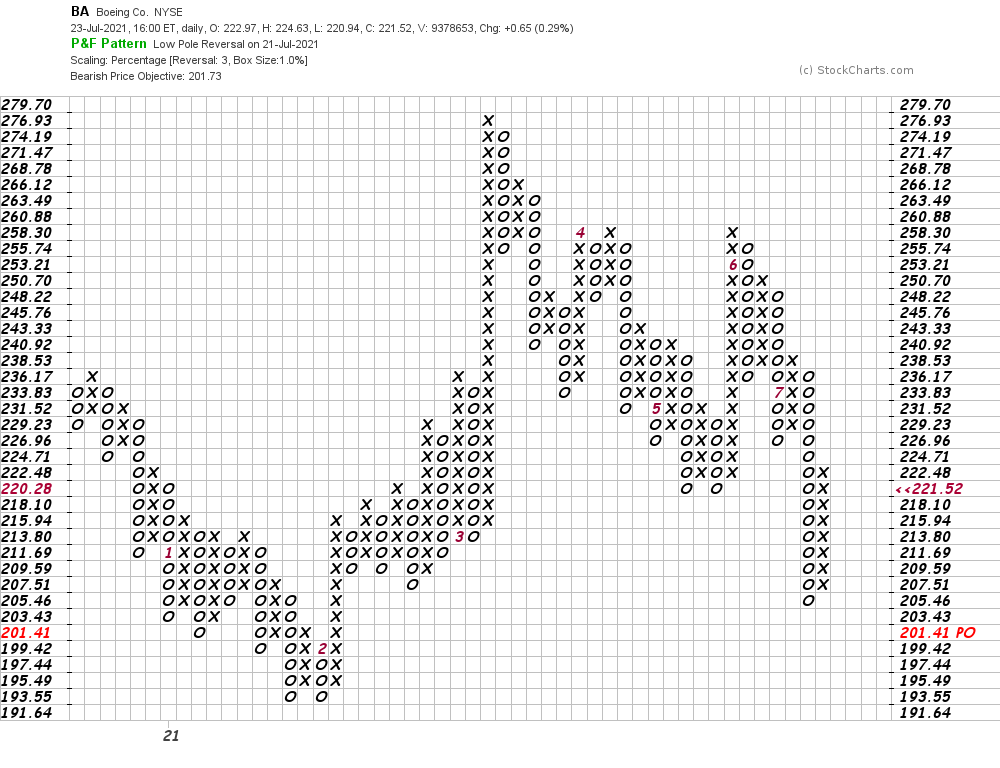 In this weekly Point and Figure chart of BA, below, we can see a potential downside price target in the $159 area.

Bottom-line strategy: It looks like BA is going to be a drag on the stock market with downside price targets on both of our Point and Figure charts. Avoid the long side for now.
(BA, FB and F are holdings in Jim Cramer's Action Alerts PLUS member club. Want to be alerted before Jim Cramer buys or sells these stocks? Learn more now.)
Get an email alert each time I write an article for Real Money. Click the "+Follow" next to my byline to this article.
TAGS: Investing | Stocks | Technical Analysis | Aerospace | Airlines | Mad Money | Earnings Preview