Let's talk about Tuesday's market in two parts. The morning and the afternoon.

You see, in the morning folks got quite excited. Bonds were up, the buck was down and, well, stocks were up. So what changed? What changed was that the put/call ratio was .67 midday. That's, generally speaking, a low reading (too many calls being bought relative to puts) but more importantly, had it held until the end of the day, it would have been the lowest such reading in a year. That's how much sentiment has (had?) shifted in the last few days. Recall last Tuesday the put/call ratio was 1.18.

I found that curious, because, quite frankly, the indexes have mostly been milling around the same area they have been in since Friday, yet boy did sentiment shift.

Then came the afternoon swoon and the put/call ratio ended the day at .83. A week ago a swoon like that -- even if we recovered in the end because see last Tuesday when we did recover -- would have netted a high put/call ratio. In the end we got one that is neutral, but a far cry from where folks were a week ago.

And, yet, despite the S&P getting higher today than it was two weeks ago, the number of stocks making new highs on the New York Stock Exchange chimed in at 65 vs. 98 two weeks ago. That means there has been no improvement in this metric since folks changed their market view. 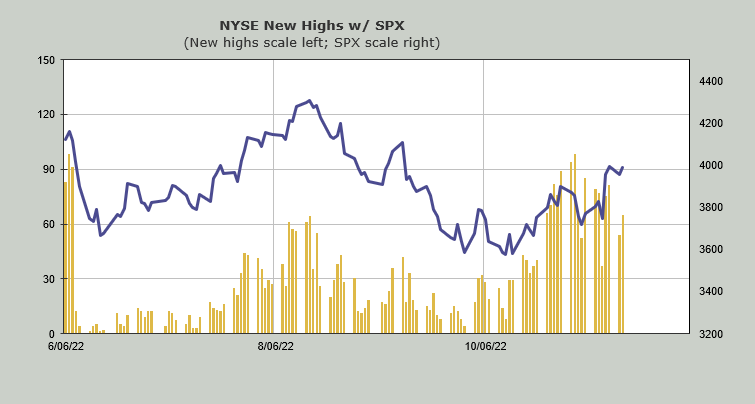 Surely Nasdaq improved, since that's where all the action is. Nope. Nasdaq had 140 new highs two weeks ago. Heck it had 139 last Thursday. Tuesday chimed in at 111. 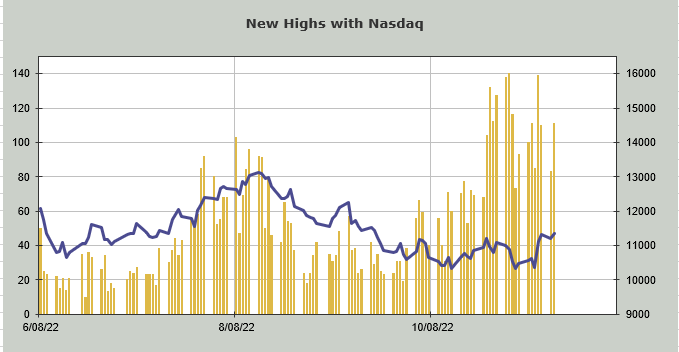 I realize I am fussing a lot over this metric, but I ask you to recall that in late September I fussed non-stop over the number of stocks making new lows. If the indexes keep going down and new lows are not expanding, I believe the selling is drying up. Here we have new highs contracting and the indexes are rising. That makes me wonder if the buying is drying up.

Thus far breadth has held steady and that means the McClellan Summation Index is still rising and requires a net differential of negative 3,400 advancers minus decliners on the NYSE to halt the rise. A week ago it needed negative 3,300, so it's holding steady. Some might say that despite the 200-plus point rally in the S&P 500 the cushion hasn't expanded so that's a negative. I will take the tack that it's holding steady for now.

I still expect the market to get to an intermediate-term overbought sometime near Thanksgiving, which is now just a week away.

Get an email alert each time I write an article for Real Money. Click the "+Follow" next to my byline to this article.
TAGS: Stocks | Investing | Technical Analysis |